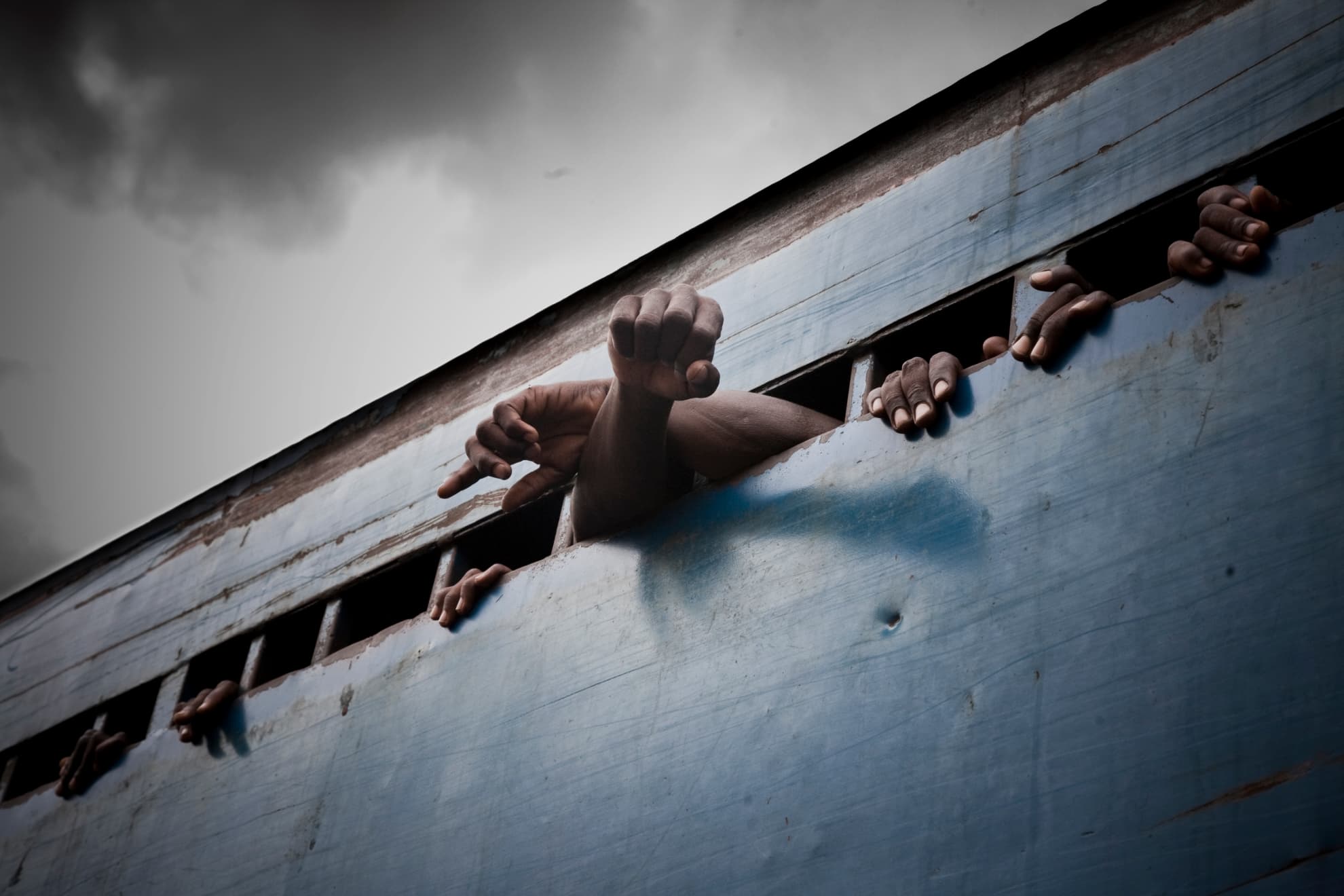 1. Each morning, a handful of prisoners from the Pademba prison are taken to the Criminal Court. Many of them will need to attend court dozens of times before being sentenced, indeed years can pass before they receive a sentence. In the central prison there are around 1,400 inmates, of which 35 were imprisoned even though they were minors. 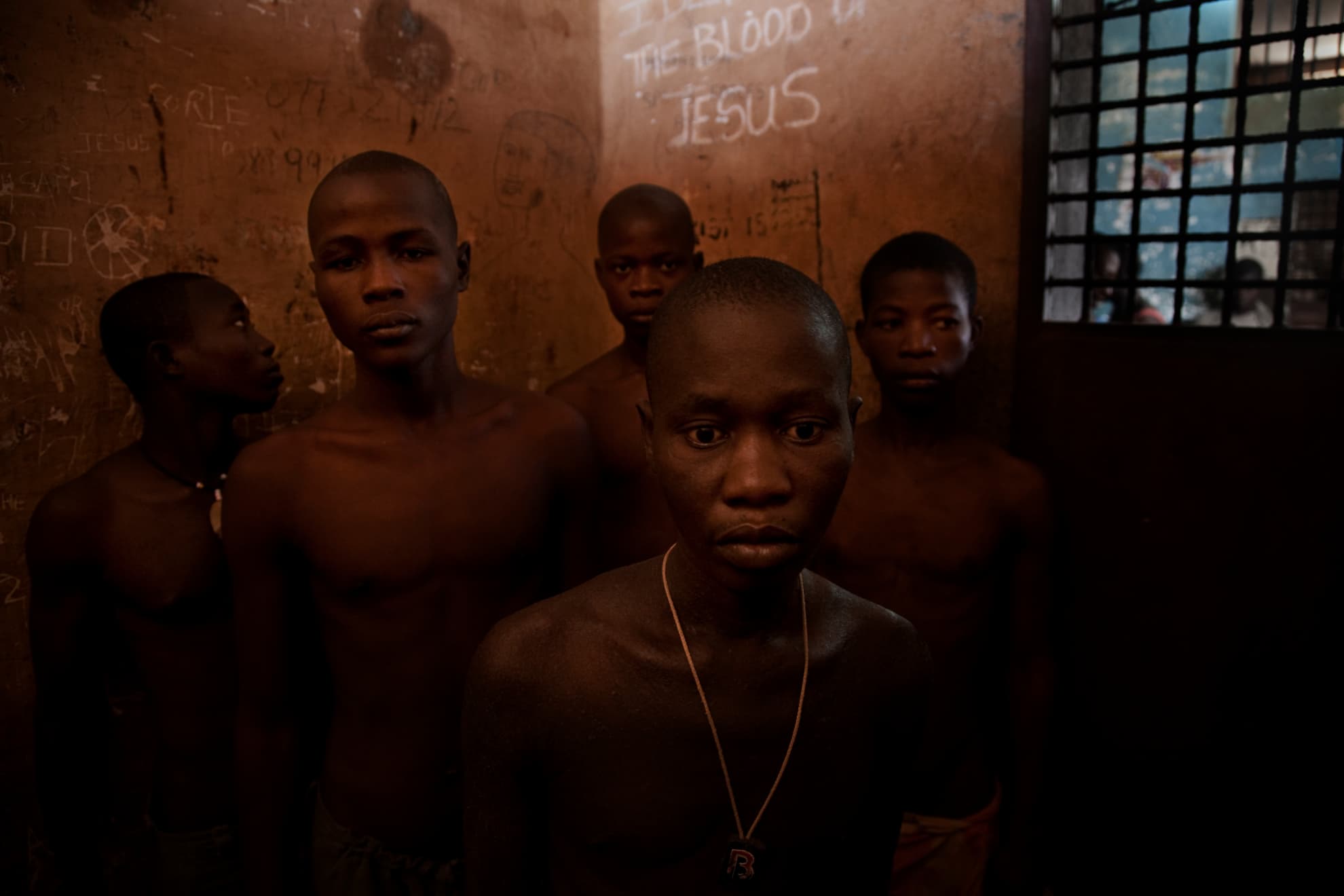 2. Ibrahim Cago (second to the left), 17, received a two-year prison sentence, having been accused, without witnesses, of stealing items from a car. Steven S. Lebbie (middle), 17, went to prison on the 29th of October 2009, after receiving a three-year sentence. He was accused of stealing two sheep. He died in prison in Spring 2010. 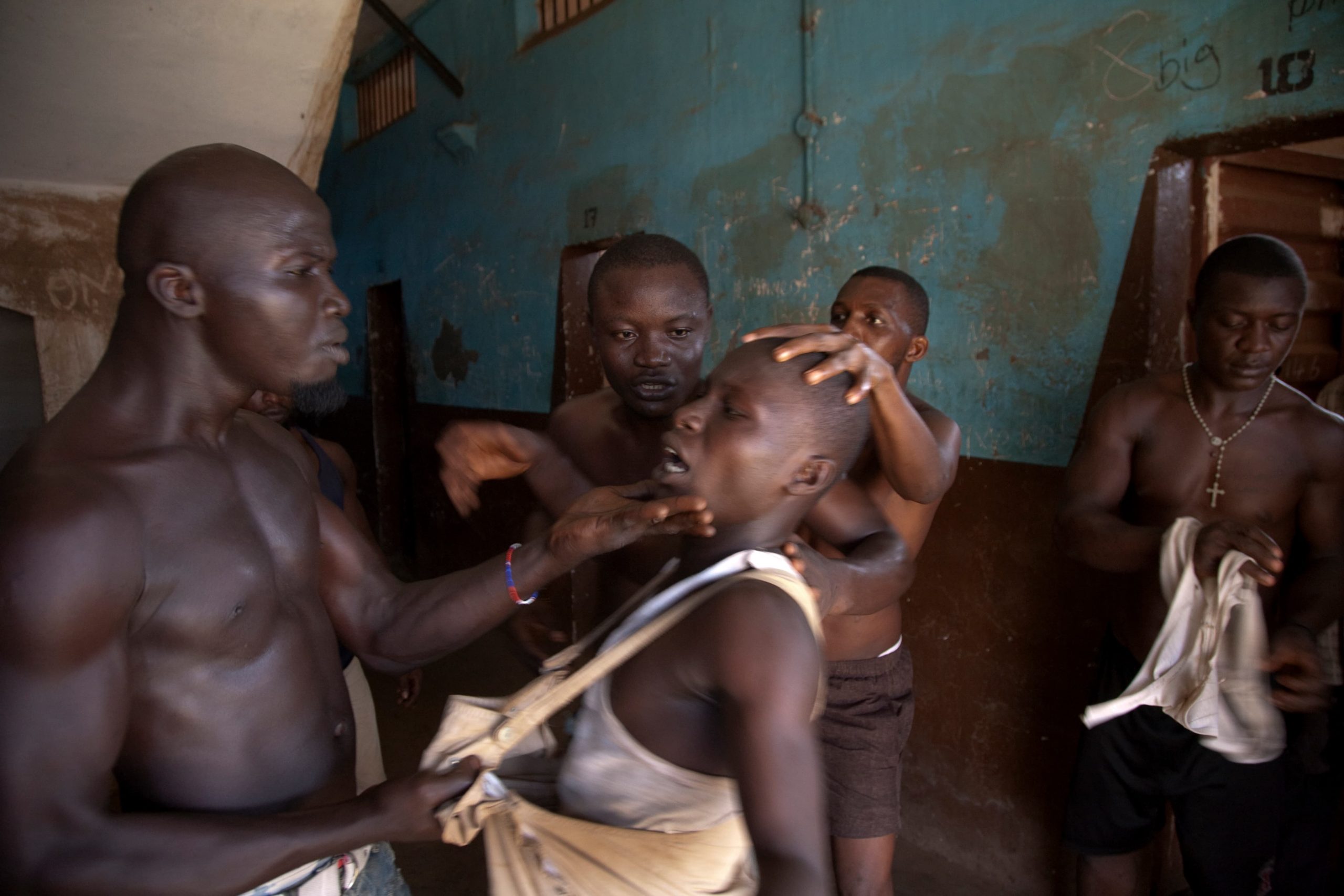 3. Ibrahim Sesay is interrogated by other inmates, after the disappearance of some sandals from one of the cells. Ibrahim was accused of stealing a mobile phone at his school. He was arrested on the 24th of October 2009 and spent 8 days at the police station, without any food. The police report states that he is 19 years old, rather than 14, which he claims to be. He was sentenced to 18 months in the Padema prison. 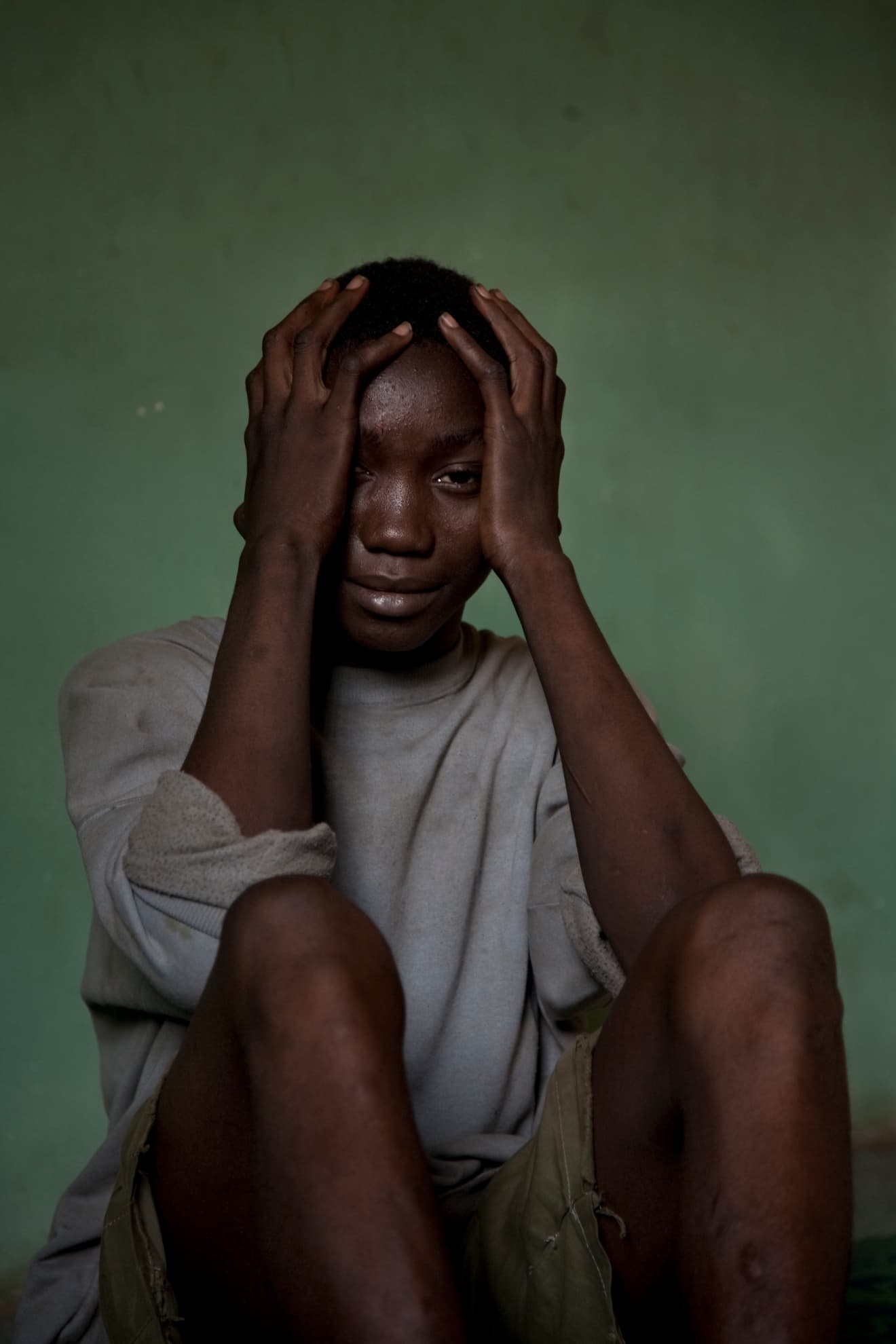 4. The day on which Mohamed Conteh, 14, is sentenced to three years in prison or the payment of 100,000 leones, after being accused of possessing a packet containing marihuana. As he has no family members to help him, he will have to serve the prison sentence. 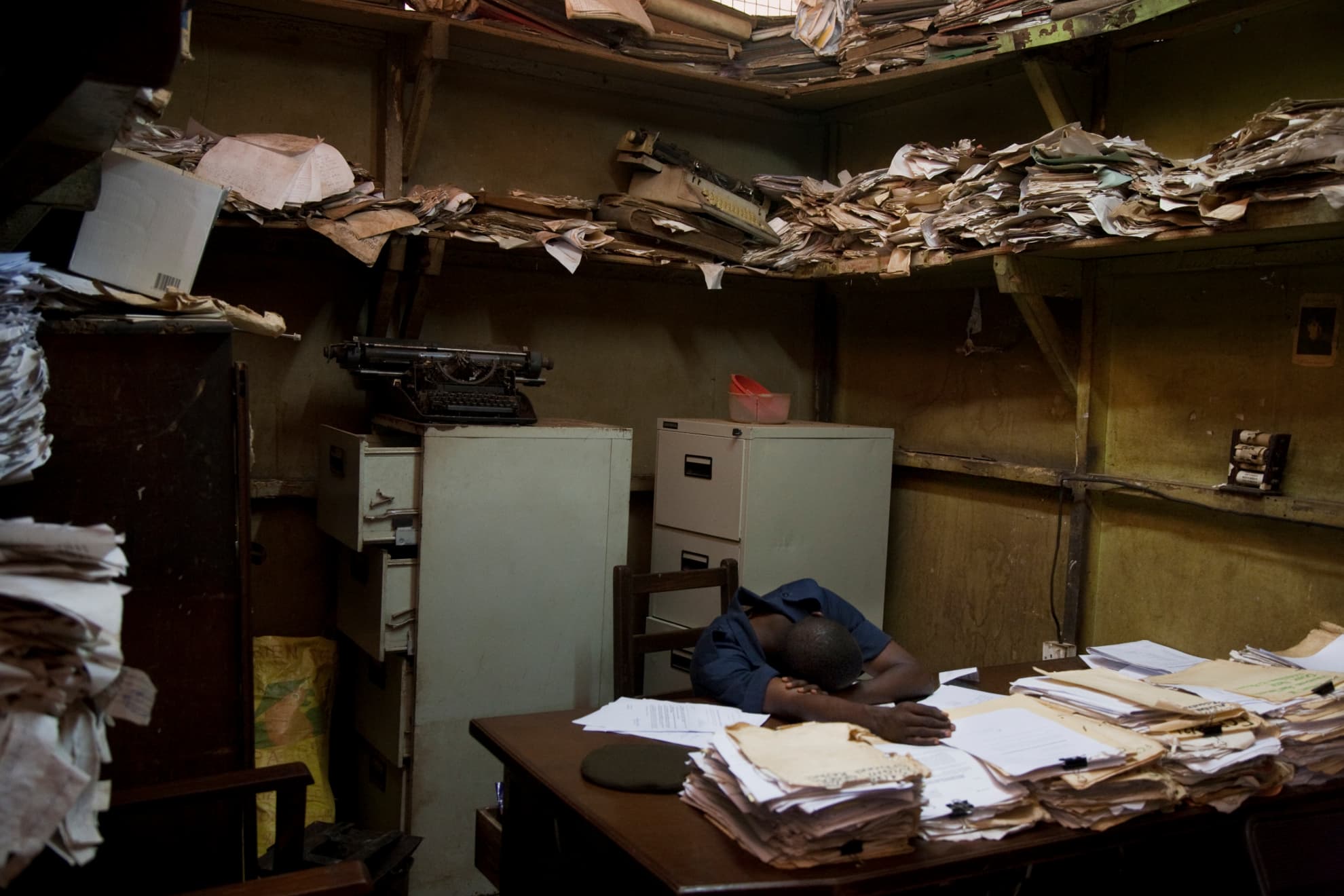 5. An official in the records office at the Central Prison, where the files of the approximately 1,400 prisoners are kept and where it is difficult to find some of them. The similarity between many prisoners’ names, the lack of order and the number of years it takes before some trials reach their climax, turn these records into a veritable nightmare. Officials earn an average of 30 Euros per month. 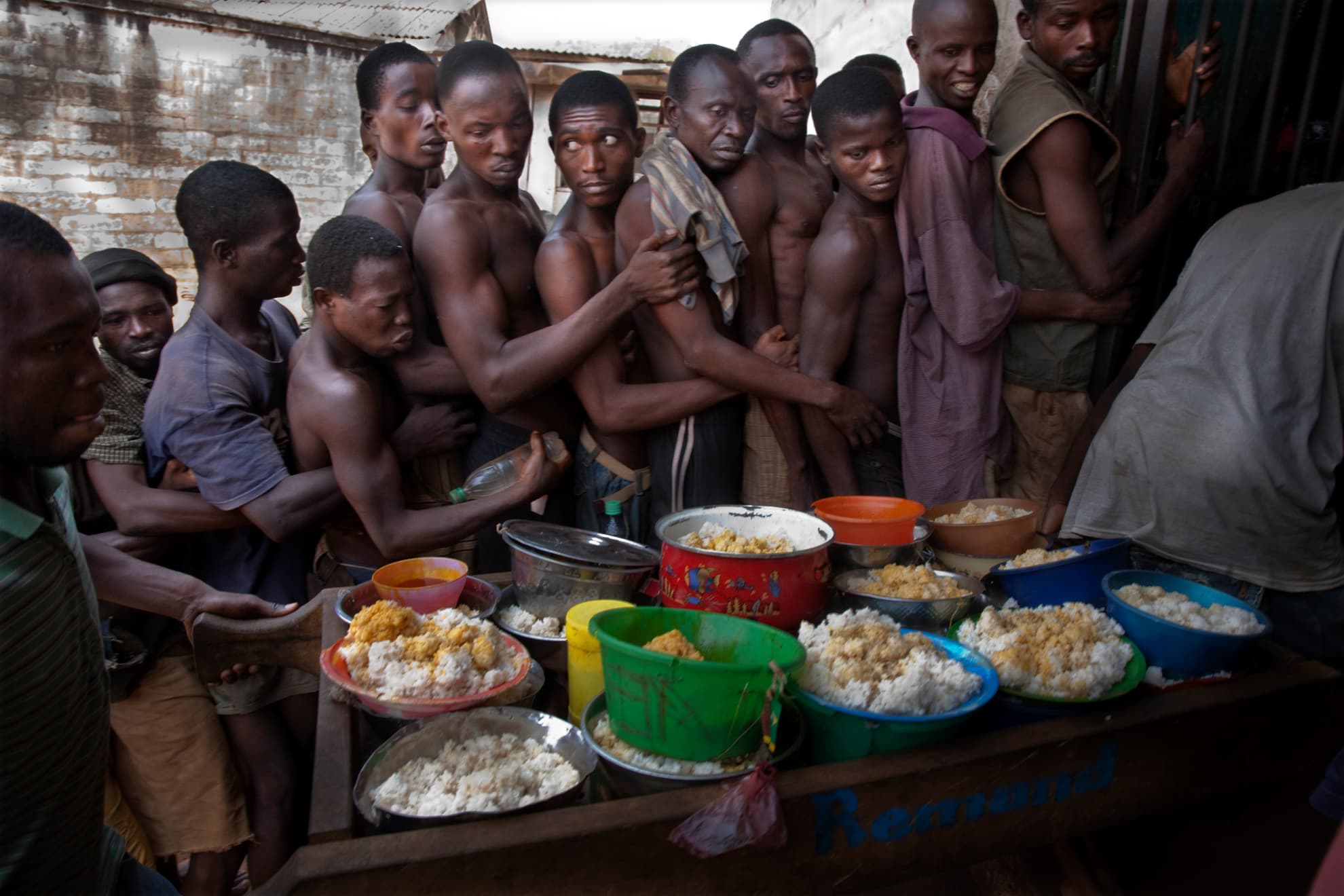 6. The shortage of food forces prisoners in pre-trial custody, numbering around 240, to form long queues to ensure they get a helping. There is only one solid meal served each day, based on cassava leaves. Child prisoners suffer the most in terms of food and water rations. Water supply is variable and it is a serious problem. There are days when a third of a litre is shared out, which is not always enough to provide for all.If you have money, you can buy water or food, but the vast majority of prisoners do not receive any visits and therefore do not have access to money. 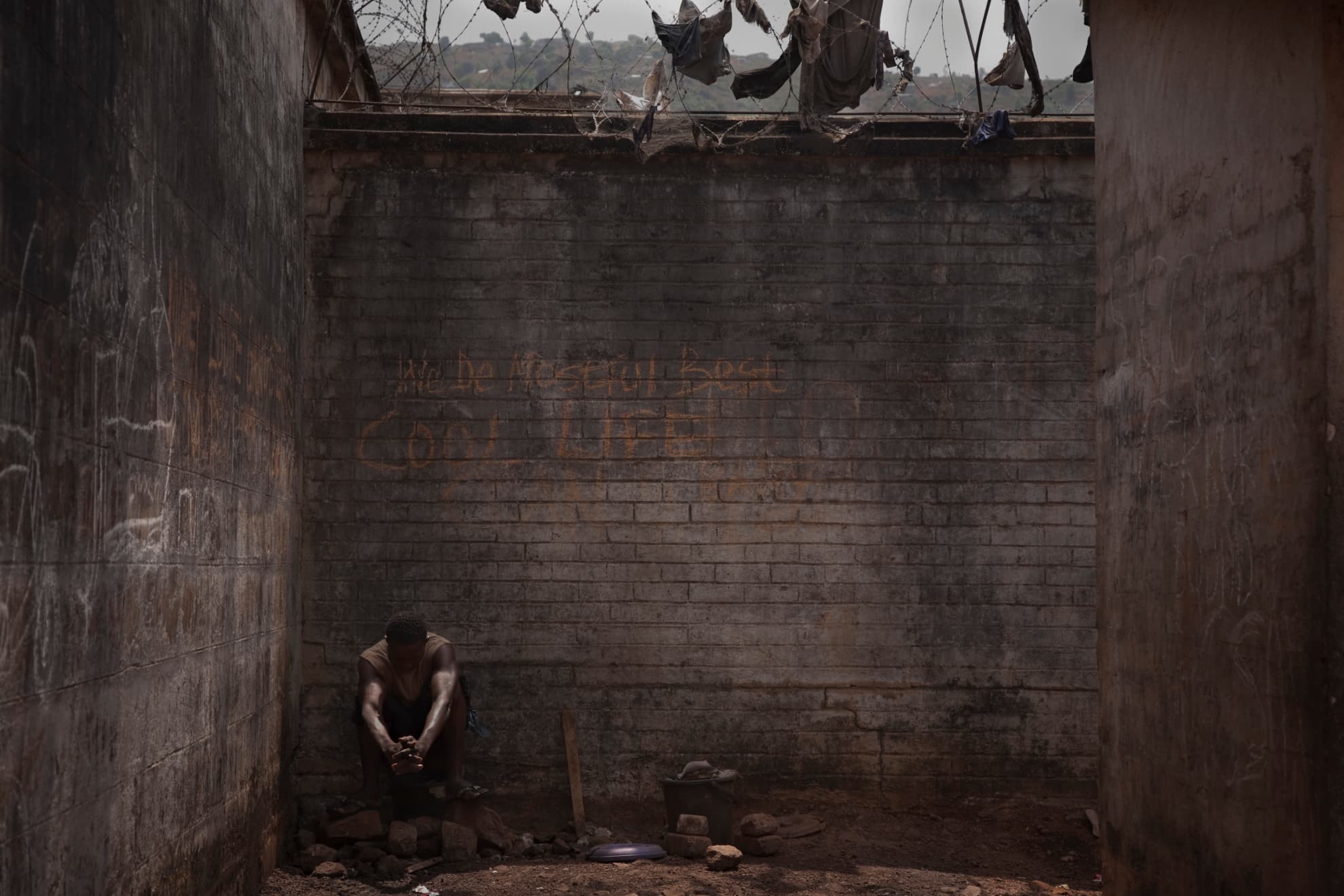 7. A bucket at one end of the courtyard serves as the toilet for 240 prisoners in the pre-trial custody block at Pademba Prison. 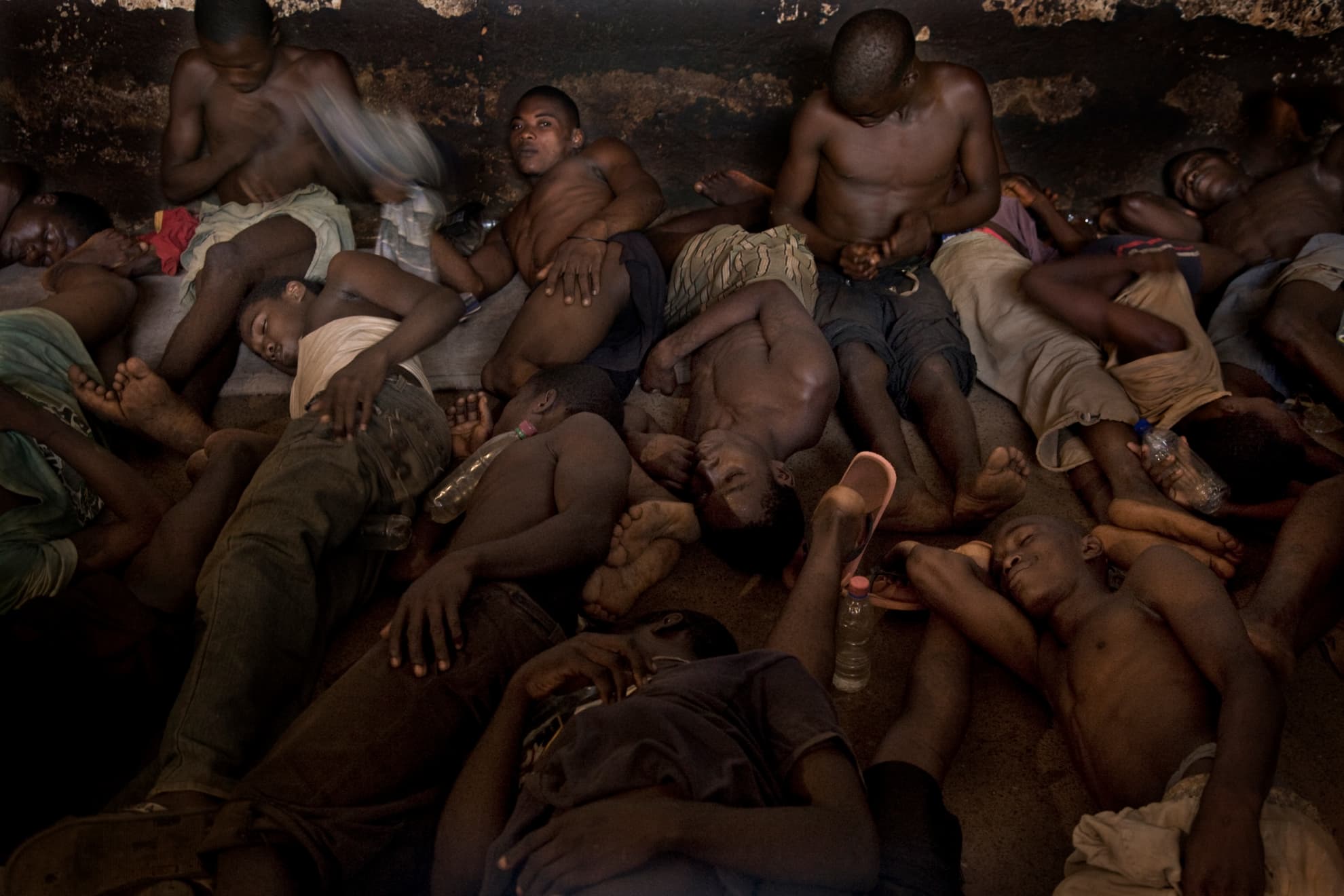 8. One of the cells in the pre-trial custody block at the Freetown Central Prison: 25 square metres, in which 60 people are crammed together, for 16 hours at a time. Most prisoners have scabies and contagious fungal infections. Hygiene measures are non-existent: there is one bucket to serve as a toilet for all of them. In January, it had been eight months since they had received a bar of soap. The main problem is the lack of drinking water. 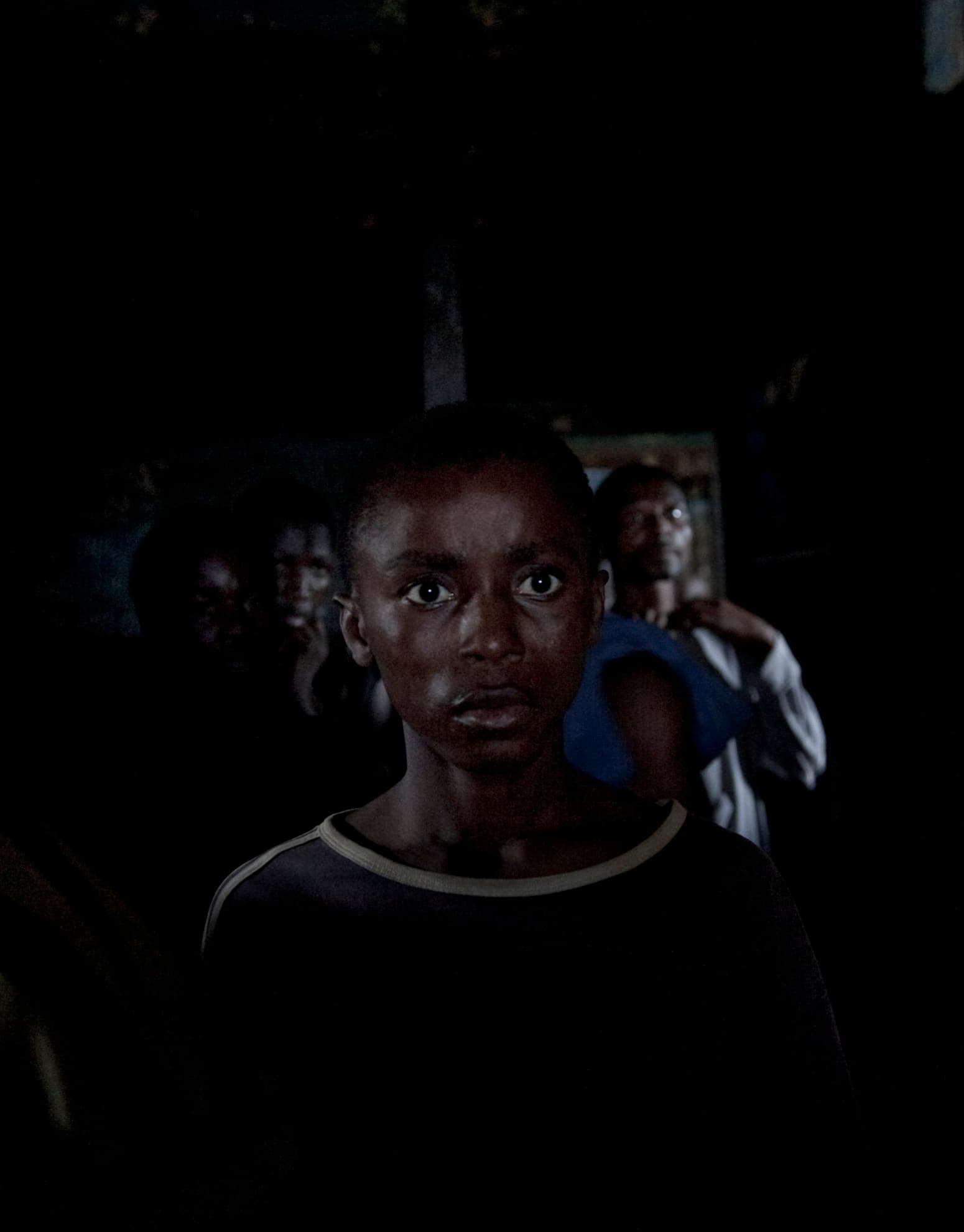 9. Abdul Sesay was imprisoned in Padema prison when he was 16 years old, on the 26th of July 2009. A passer-by accused Abdul of having his portable radio and Abdul hit him, causing the man to develop health problems. 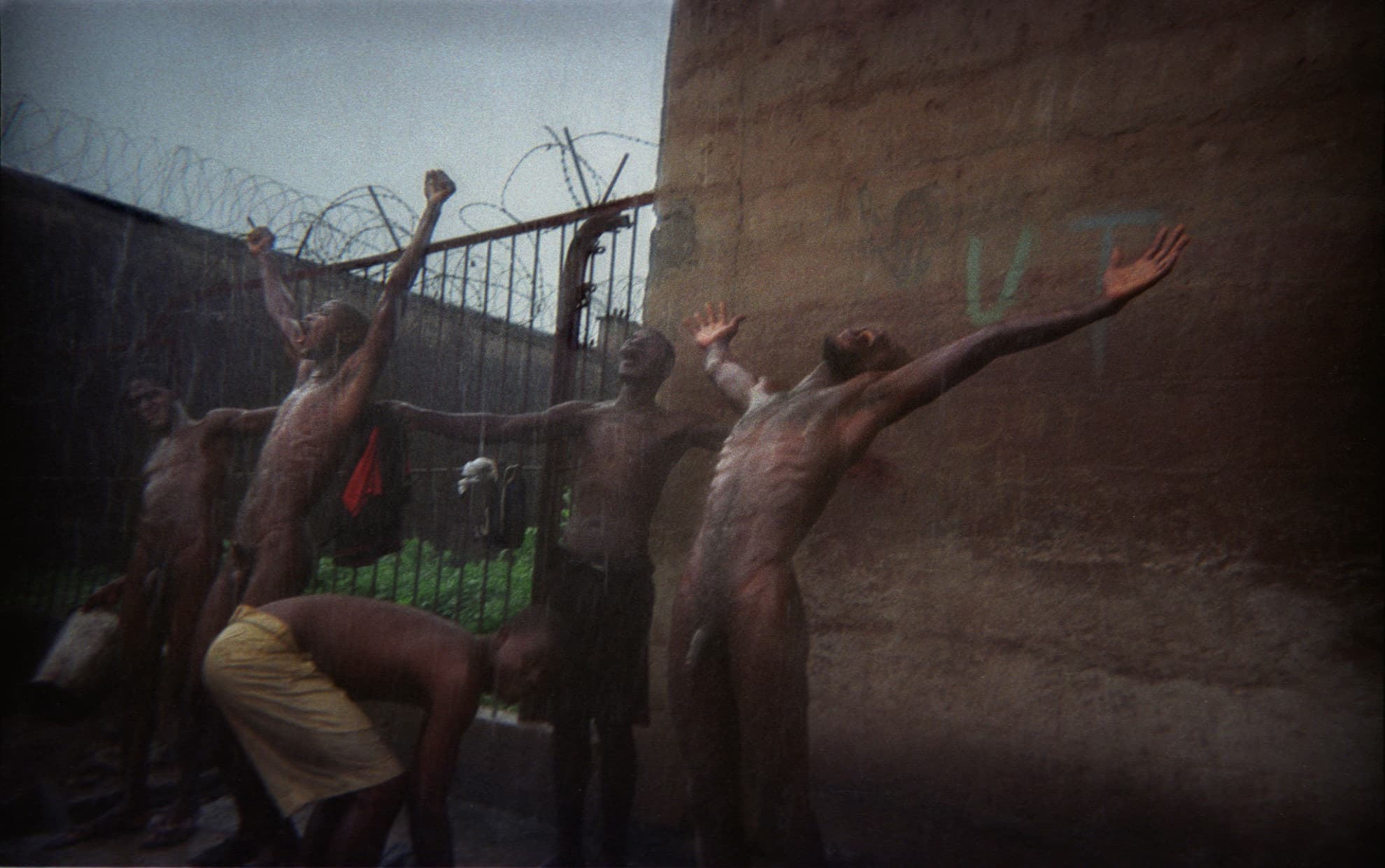 10. For the prisoners, the rainy season (July and August) means an opportunity to wash themselves. One of the main problems in prisons in Sierra Leone is the lack of running water. A bucket of drinking water sells for 1,000 leones. The rainy season is time of blessing.

This reportage was carried out in Sierra Leone’s prisons: in Freetown Central Prison (in the capital, on Pademba Road) and the provincial prisons of Bo, Kono and Makeni, during February and August 2010. Mainly at Pademba Road Prison, where 32 children, aged between 14 and 17, share prison life with 1,300 adults. Sentencing in Sierra Leone is abnormally harsh, and the Sierra Leonean government considers that criminal responsibility begins at the age of ten, which is in clear conflict with the Convention on the Rights of the Child ratified by the same government in 1990.

Fernando Moleres was born in Bilbao in 1963 and worked as a nurse in Orduña until 1990, when he began his career as a photographer with a report on the ghettos of South Africa.

For over six years, he has been working on an extensive project in more than thirty countries around the world, on child labour.

The winning piece of work awarded the Luis Valtueña Prize, on the situation of minors in African prisons, was a personal initiative, which received financial backing from the “Revela” grant fund. He subsequently extended this piece of work to the Juba Central Prison, in Sudan. 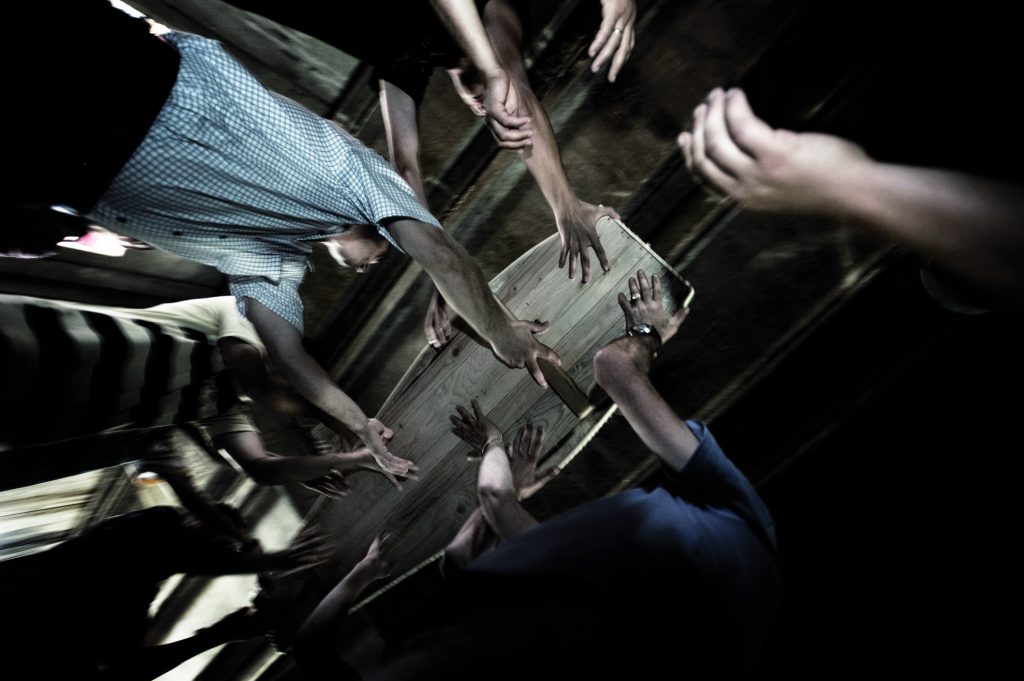