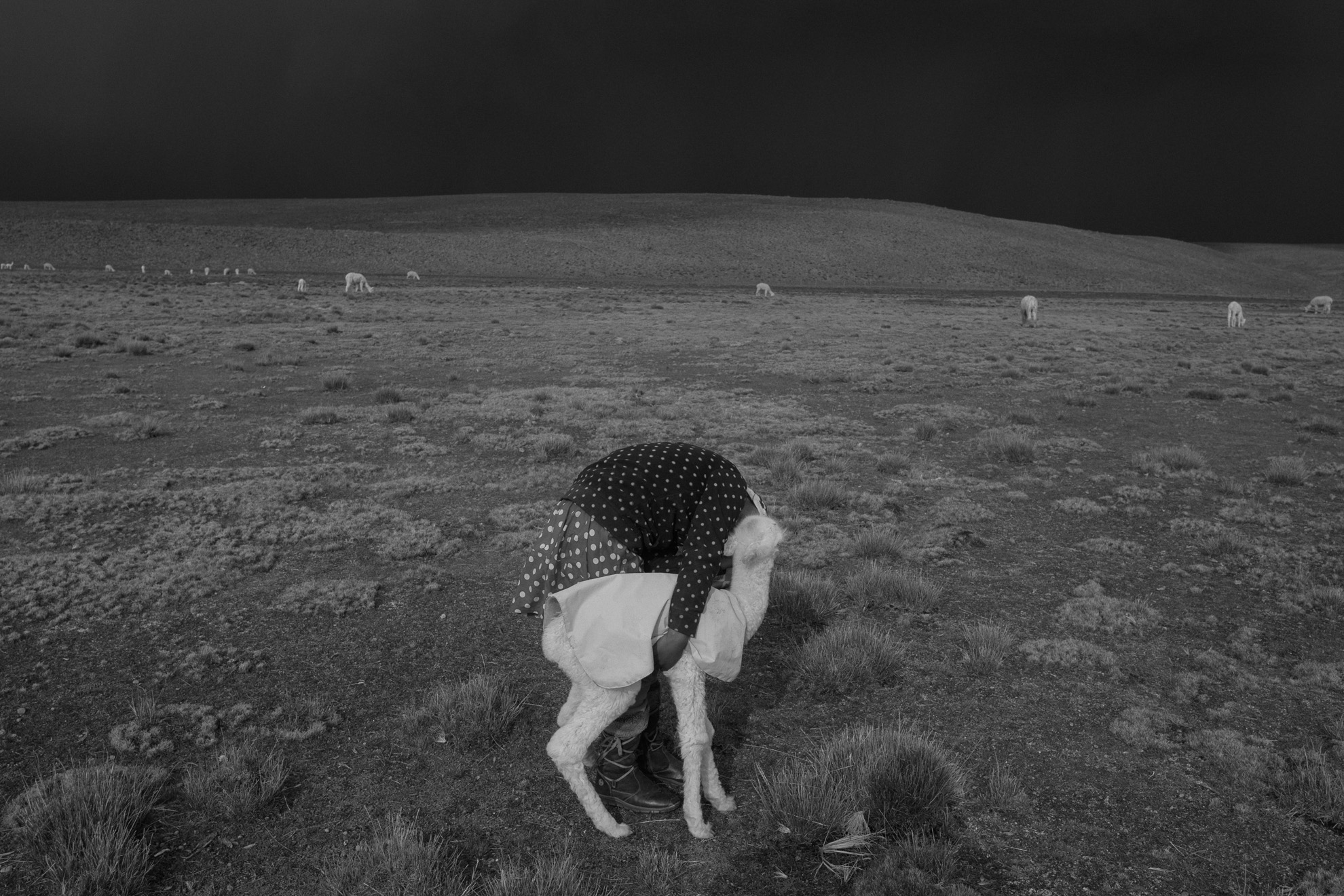 1. A girl plays with her Alpaca.  Mother Earth, Pacha Mama in the Quechua language, is a goddess for the Andean peoples, worshiped for her fertility. This is part of the cultural identity inherited from the Inca tradition, the greatest empire of South America, of which Peru was the cradle. The attachment to the land, which is the primary source of income, is very strong in populations that live far from the places where minerals are extracted. It is an intimate relationship expressed through a close connection with the land, with the family, with the animals, and with the harvest, going beyond utilitarianism. On the other hand, the communities that live next to the mines, due to the forced and rapid modernization brought by the mining companies, have broken their original bond with the land, devastated by the mining activity and its consequences. 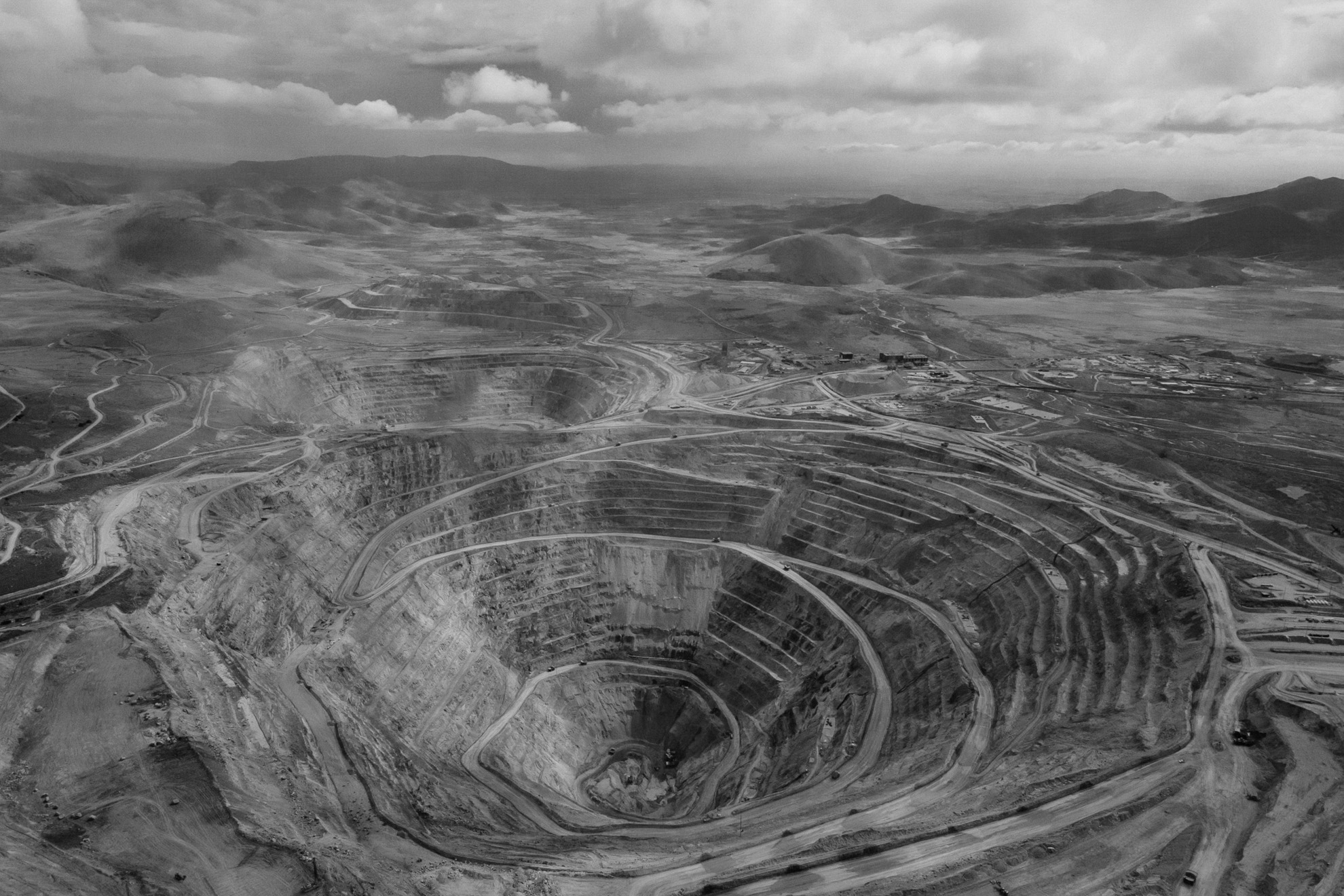 2. Air drone view of the Tintaya mine, Espinar, Peru. Large sections of territory have been bought by a powerful multinational (Glencore) that gives shape to the enormous extraction complexes of Tintaya, Antapaccay, and Coroccohuaycco (today about 40% of the district's territory is granted to mining companies) disappointing the inhabitants of the communities and causing a net deterioration of their conditions, creating a huge imbalance between the lifestyles of those working in the mines and those who do not. The major problems afflicting territories and populations of the Espinar area are contamination of water with heavy metals and the lack of water due to mining activity. 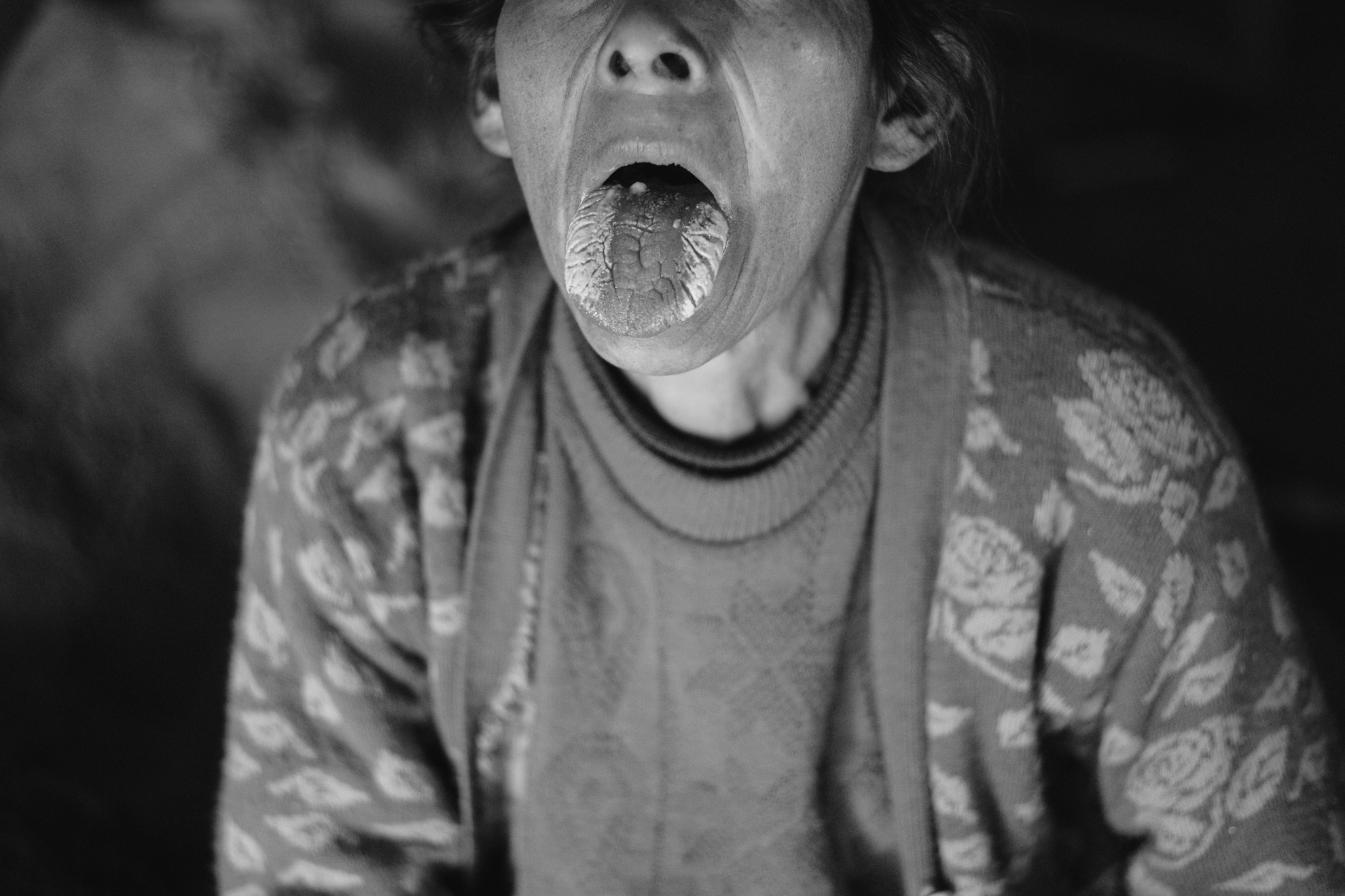 3. Avelina Chilo Rios, 53, has cancer. She says her husband and two of her five children have also died from diseases related to chronic heavy metal poisoning. Glencore, the multinational mining company, offered Avelina a small sum of money to buy her home to expand the mining site. Proving the locals' strong attachment to the land, Avelina chose not to abandon her property, the few animals she had left, and the community of Tintaya Marchiri where she grew up. 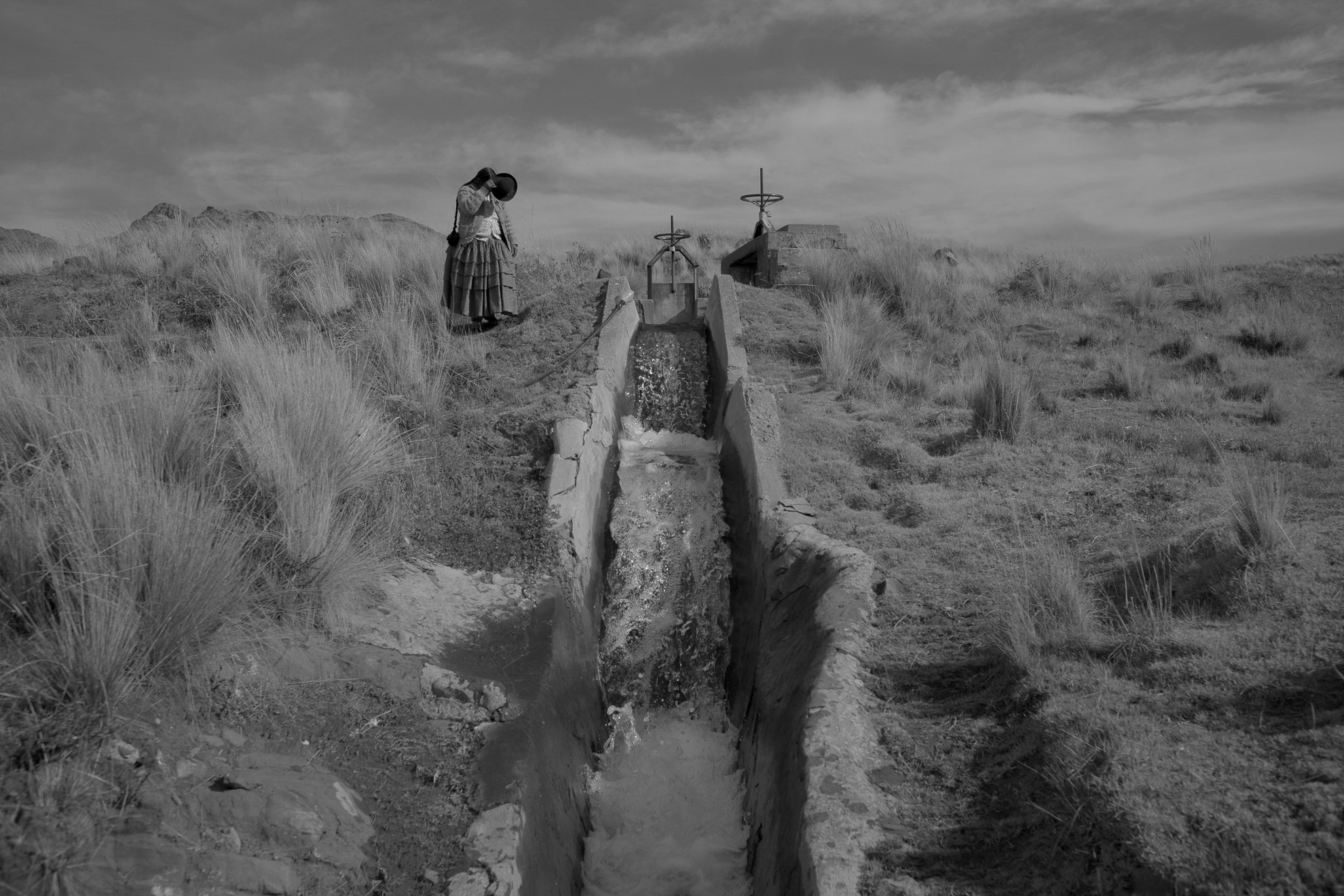 4. A woman gets water from the water collection system his community has built. Ayaviry has no drinking water because its lakes and rivers are contaminated by mining waste. Some trucks supply drinking water at 25 times the cost of water bought in Lima, while some neighborhoods have access to water for only 6 hours a week. Thus, water resources are scarce for the population, while large quantities of them are taken and used by the mining company for extraction activity. As a result, the fields are barren, and the few crops grown are toxic and not enough to sustain families. Since 1996, the Peruvian Ministry of Health has sampled blood lead levels in children twice a year: more than half of them have lead levels above the average, some even over three times what the United States considers the maximum acceptable level. Chronic lead poisoning in children causes developmental delays, seizure disorders, organ dysfunction, and even death. 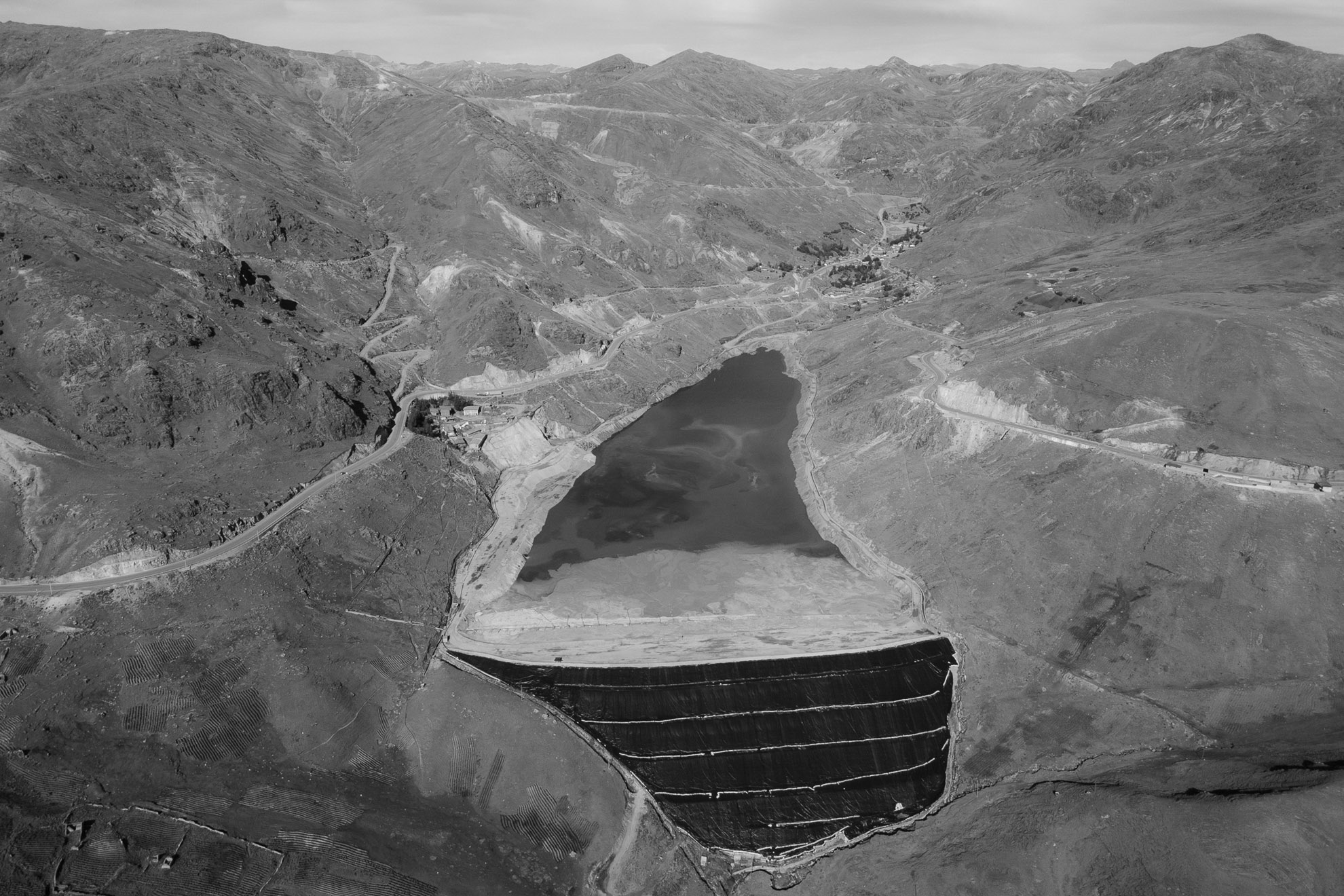 5. Tailings dams from the Buona Ventura mine in the Mimosa rural community in Huancavelica province. The indigenous people have been living with this waste dump for 67 years now, contaminating their crops and making their water unusable. 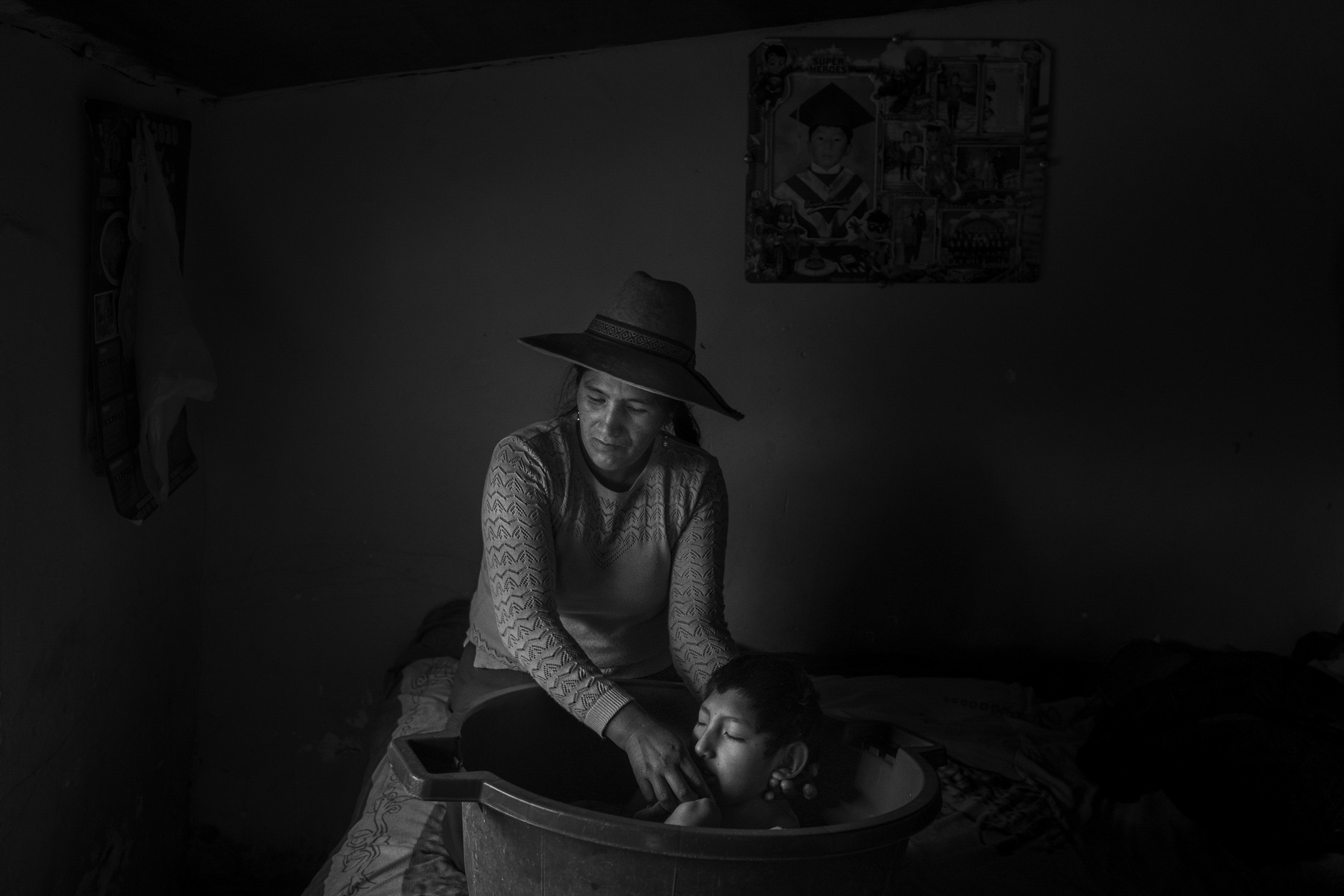 6. Silvia Chilo Choque, 40, while washing her son with cerebral palsy Julio César Chuahuayo Chilo, 13. Due to the scarcity of water, many people wash with rainwater in the rainy season. In the dry season, they use contaminated water from the river, boiling it first. Because of all this long process, many times, people can take a shower one time a week. 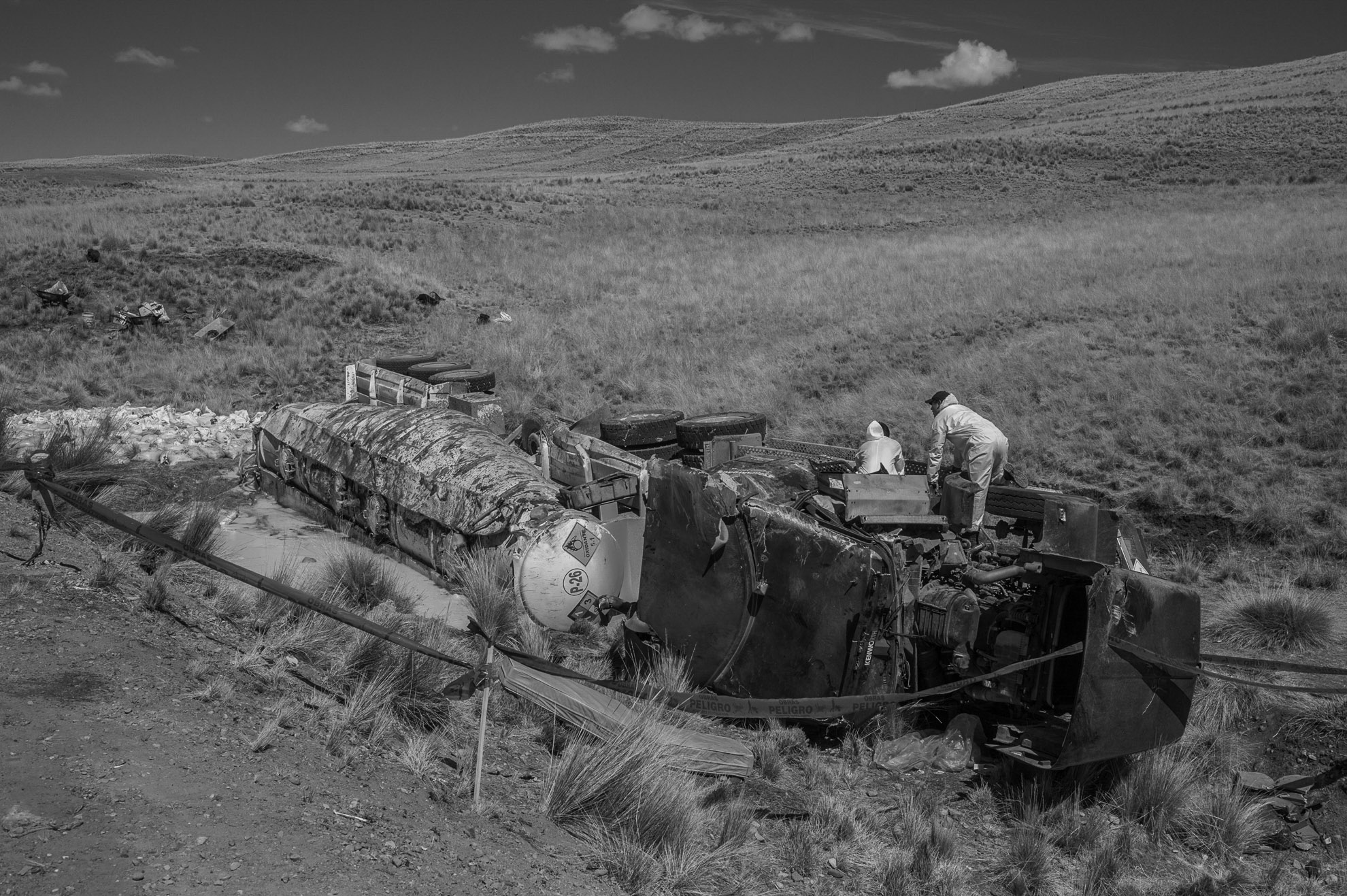 7. Along the road that connects the city of Sicuani with Espinar, a truck left the roadway. The truck was transporting chemical material which, dispersed into the environment, is going to pollute it. Accidents along the mining corridor are frequent due to the poor state of the road and the work safety procedures, and alcohol abuse. 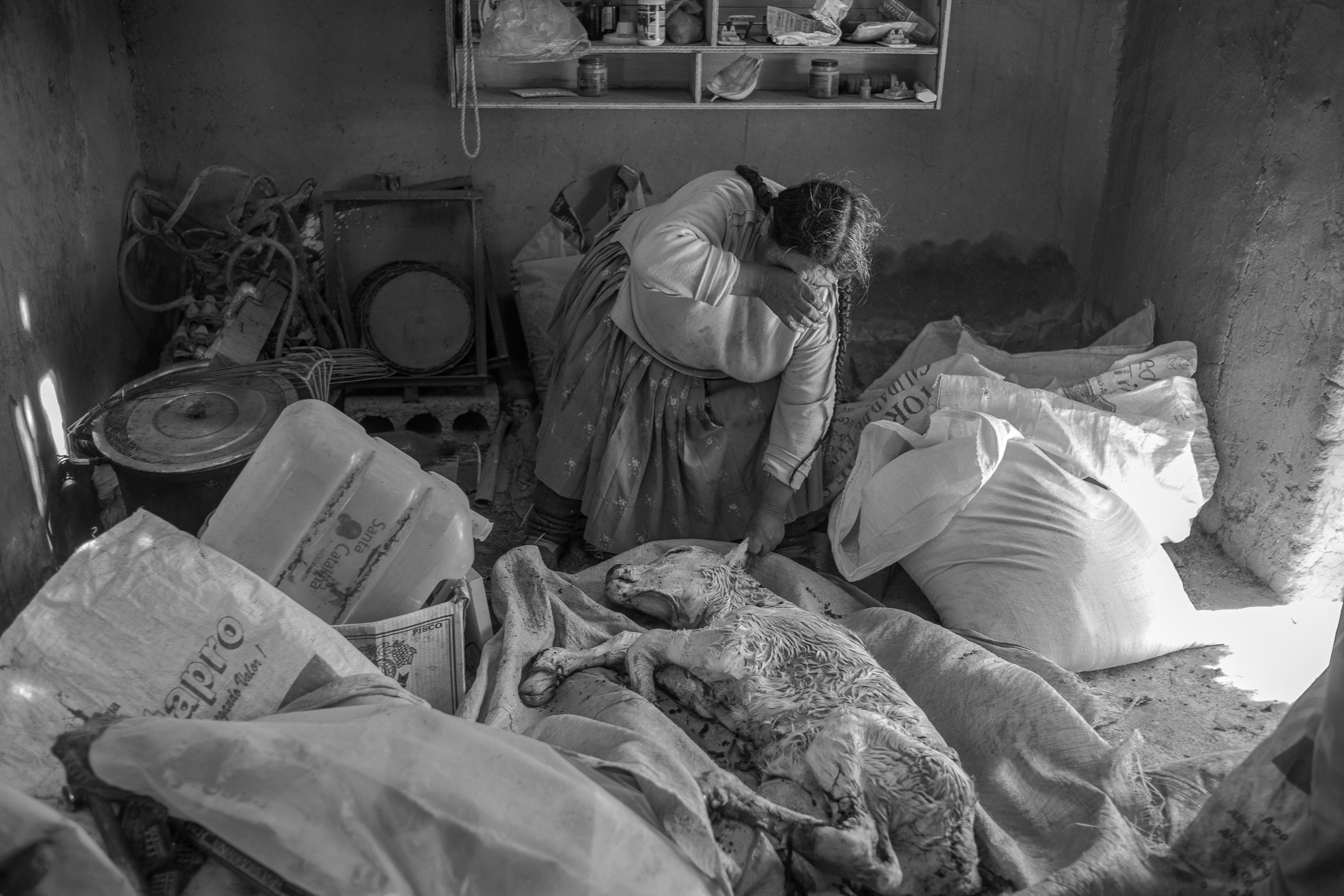 8. Grimalda De Cuno, in her home, is mourning a calf born dead the day before. "The mortality rate of farm animals has risen dramatically since mineral extraction took hold because they drink water from contaminated rivers", she says. Agriculture and livestock are no longer a source of sustenance for the communities around Espinar. In the last six years, Grimalda's family has lost 21 cows and all the sheep and llamas they had raised. Community of Huisa, Espinar district, region of Cusco, Peru. 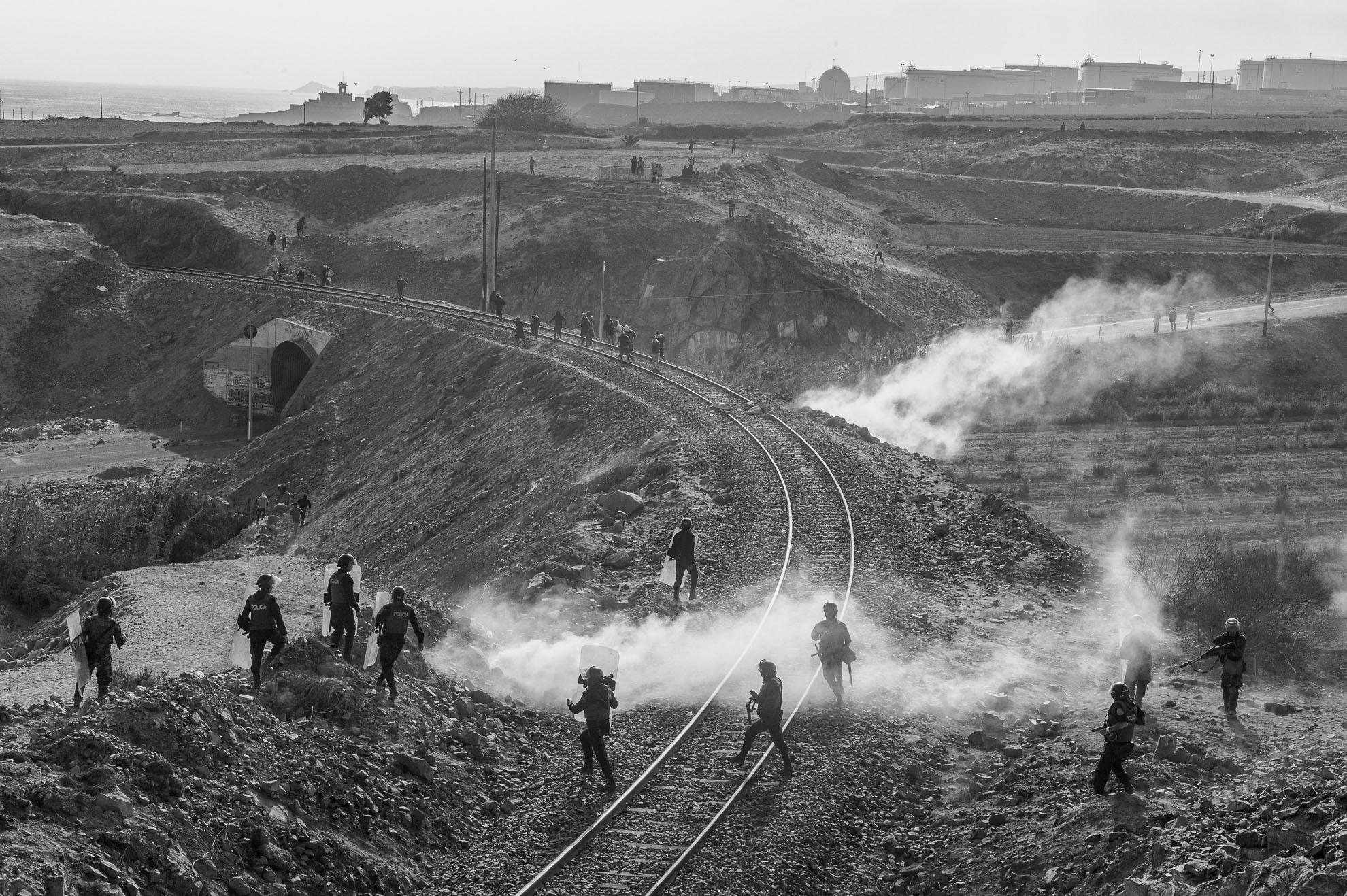 9. Urban guerrilla warfare. During the cycle of protests, which lasted more than 60 days and were organized by the local population to prevent the opening of the Tia Maria open- pit mine by the Mexican Southern Peru Copper Corporation, the clashes between police and protesters turned into urban guerrilla, with the police forces armed with tear gas on one side, and the locals throwing stones on the other. The protesters feared that the Tia Maria mine will have reduced their water sources, pollute the fertile Valle de Tambo as well as the air, with overland transportation of minerals from the mine to the port of Matarani, the outlet of the mining corridor into the ocean. From there, minerals mined in Peru leave to reach the rest of the world. 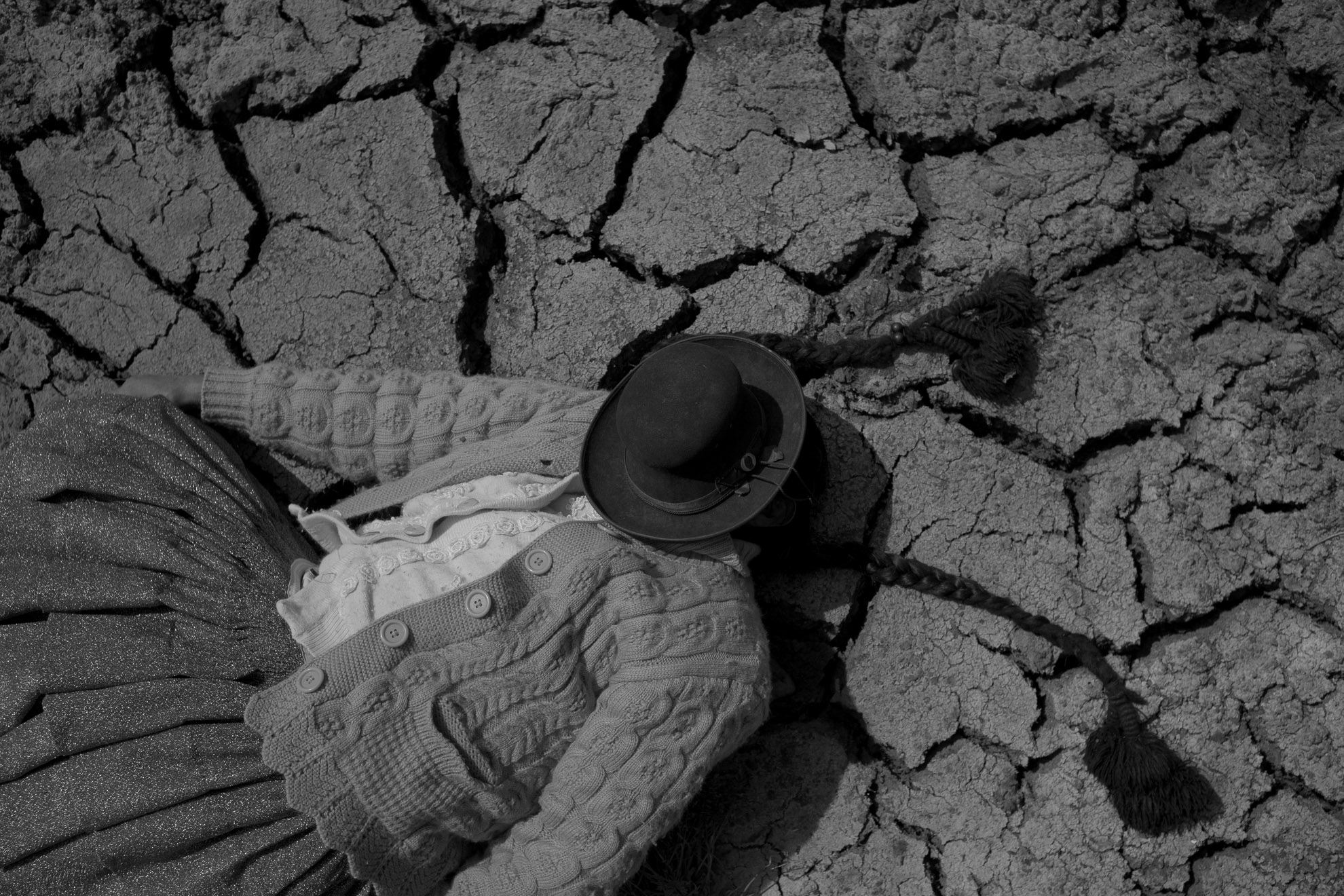 10. The city of Ayaviri, before the mine arrived, lived on cheese and milk. The cheese from Ayaviri was exported all over Peru, reaching as far as Lima and Cusco. Due to water contamination, the cows began to produce less milk and of low quality. Thus, the economic income of the breeders is lowered considerably, and the cheese producers have difficulty in selling it outside the city because the nearby markets do not want "contaminated cheese." This land does not produce vegetables, so people find themselves without the inputs due to farming and ranching.

Peru is the leading producer of gold, silver, and lead in Latin America and the 2nd of copper globally. Mining is the driving force of its economy, which has been growing since the 2000s. In 2019 mining accounted for 60% of exports and 9% of GDP, more than twice the amount of income from tourism. However, there is a dark side: millions of people-mostly native populations living in small communities are forced to share their land, air, and water with the mining sites that are growing along with the Andes Mountain range. And as a result, they have seen the environment and their living conditions deteriorate considerably over the past 20 years.

This Project is a journey of 5 years covering 20,000 km and 24 mining communities, showing the impact of a government that violates the rights of indigenous people in the name of profit. Photographed along the “corredor minero” this project shows the social, health, and environmental consequences of living near these mines. And, due to corruption in the local governments, the indigenous communities receive no benefits from the mining profits and continue to live in poverty.

Mining also plunders water in large quantities for extraction, creating arid fields and causing the death of livestock. Agriculture and farming, which were the main sources of survival, can no longer sustain these Andean communities. The little water that remains is contaminated by a high presence of heavy metals, as is reflected in the blood of the population, causing health issues like anemia, respiratory and cardiovascular illnesses, cancer, and congenital malformations that local clinics are unable to handle. The lands are devastated by huge excavations, new infrastructures, and toxic waste deposits.

Peru, a Toxic State, is an example of the damage caused by neocolonialism in South America when the neoliberal policies do not even stop the violation of human rights. And the cultural identity of people who worship Pacha Mama, Mother Earth, is devastated by these effects.

Alessandro Cinque is a photojournalist based in Lima. His work delves into mining’s devastating impact on indigenous and their lands. Alessandro has been documenting environmental contamination and public health concerns among the communities of peasants living along Peru’s mining corridor.

In 2017, working in the Sacred Valley of the Incas, he met a 53yo woman who told him that she got cancer because the water in her village was highly contaminated. Since then, Alessandro has committed to photographing the effects of the pollution that permeates the crops, livestock, and homes of the people residing near mining sites.

Alessandro’s attention to social and environmental issues affecting minorities has often driven his work. In 2017, he documented gold mining in Senegal and Kolbars smuggling goods at the border between Iraq and Iran. In 2019, while studying at the ICP in New York, he portrayed Williamsburg’s Italo-American community and traveled to Arizona to photograph the abandoned uranium mines in the Navajo territories. His photos were published in the New York Times, NYT Lens Blog, NatGeo, MarieClaire, Libèration, L’Espresso.

In 2019, his work on Peru won POYi’s Issue Reporting Picture Story first place. In December 2019, Alessandro moved to Lima to become more acquainted with Peru’s culture and society. He began contributing to Reuters’ coverage of Latin America while expanding his project on the impact of Peru’s mining industry on Quechua populations. 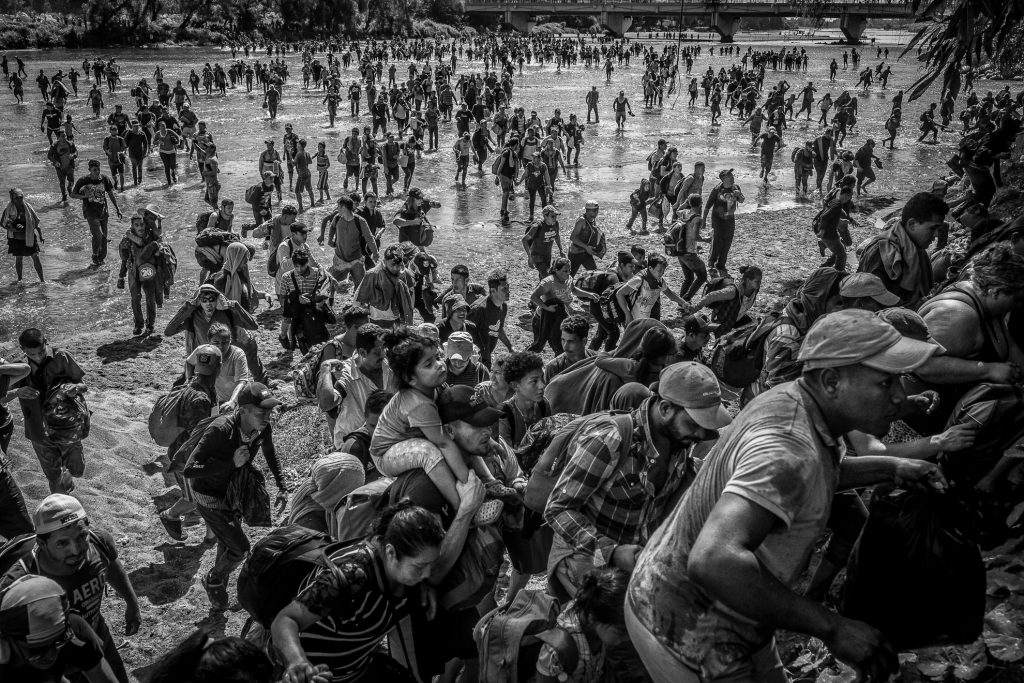