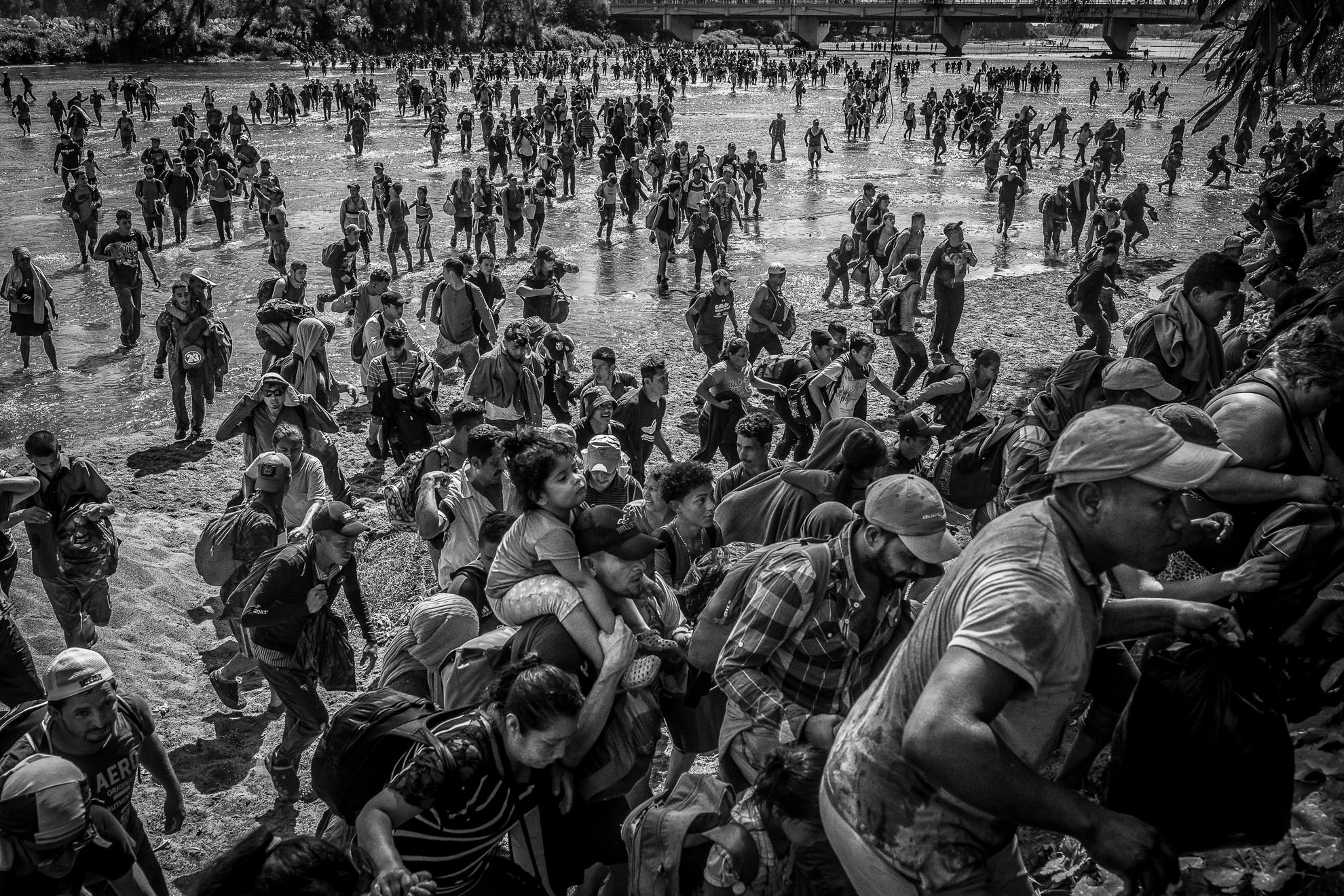 1. Ever Sosa carries his daughter on his shoulders as he cross the Suchiate river from Guatemala to Mexico in an attempt to follow their path to the United States south border with a new migrants and asylum seekers caravan. 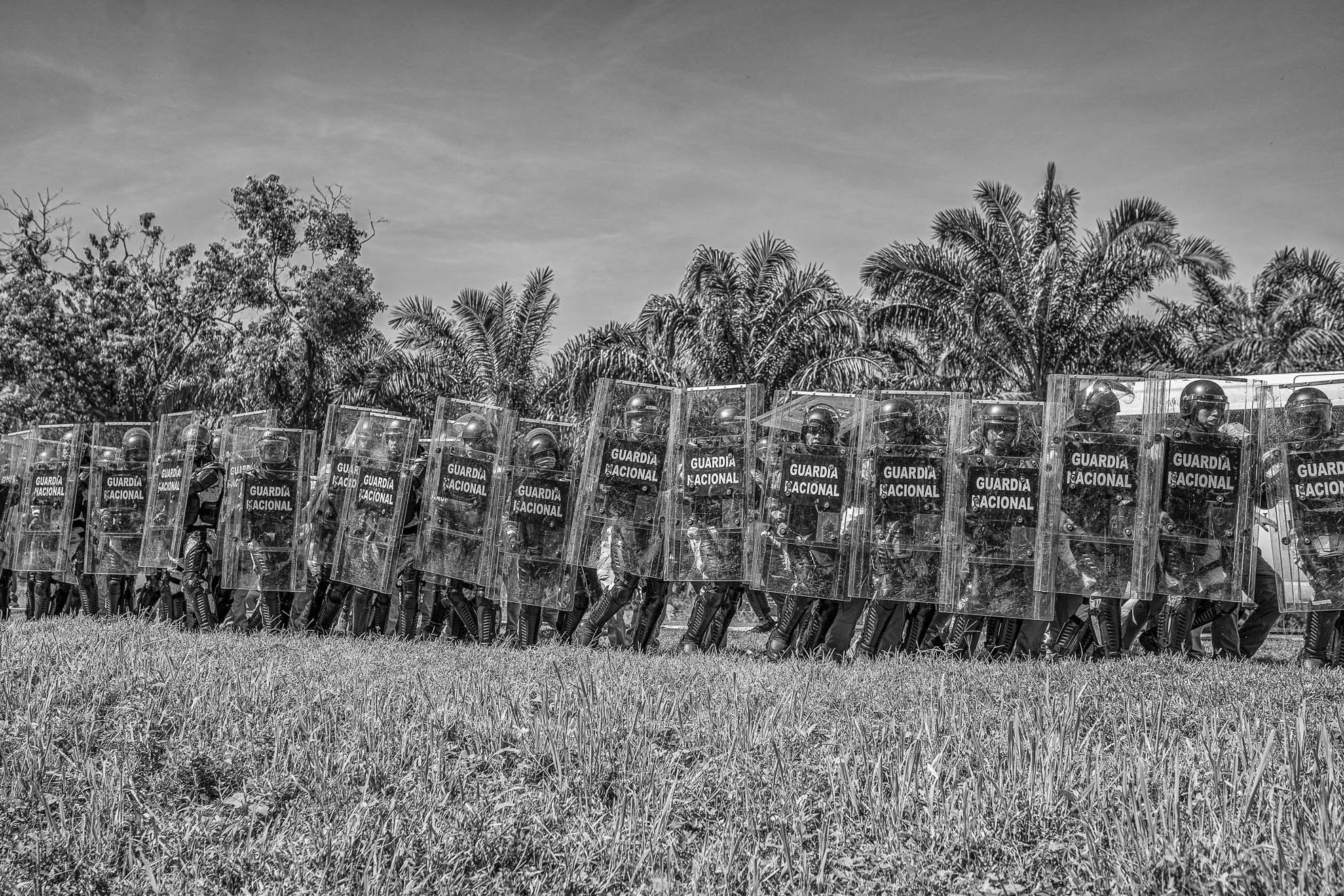 2. National Guard members in a shield wall formation to confront migrants trying to flee from a raid. 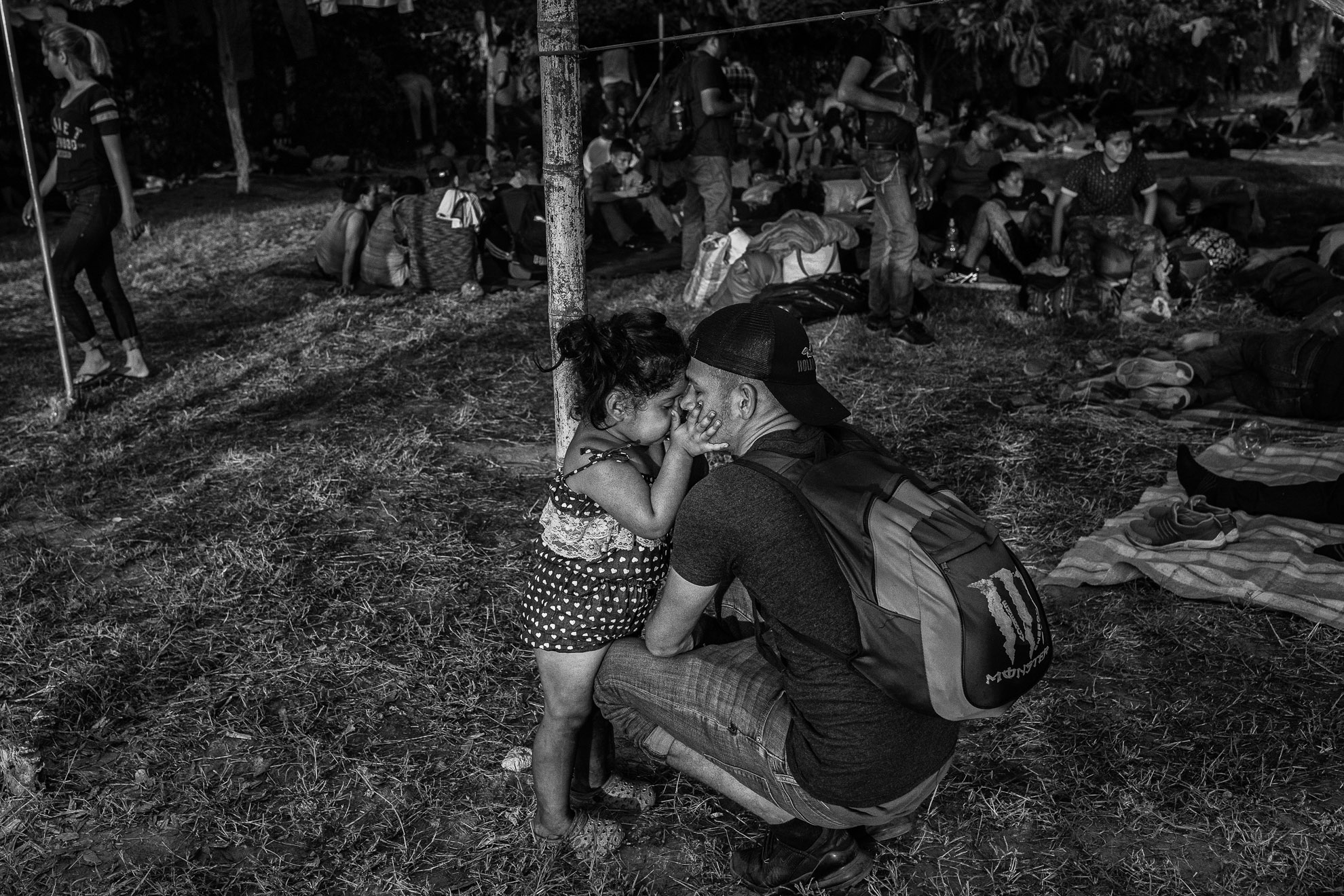 3. Ever Sosa, a Honduran National, kisses his daughter a day before his attempt to cross from Guatemala towards Mexico across the Suchiate River. 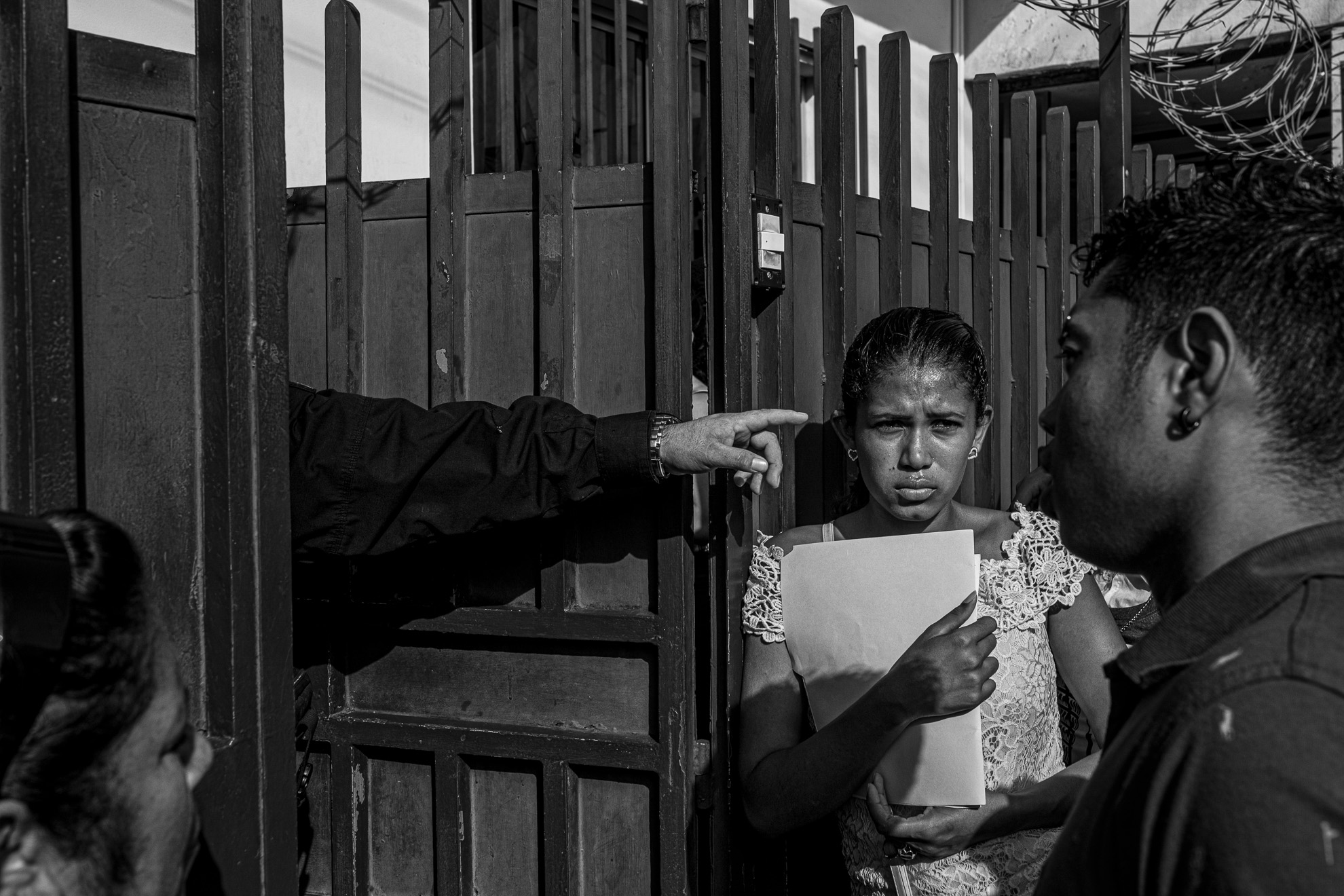 4. Asylum seekers wait at the gates of the Mexican Commission for Asylum for humanitarian visas that will allow them to travel to North Mexico safely. 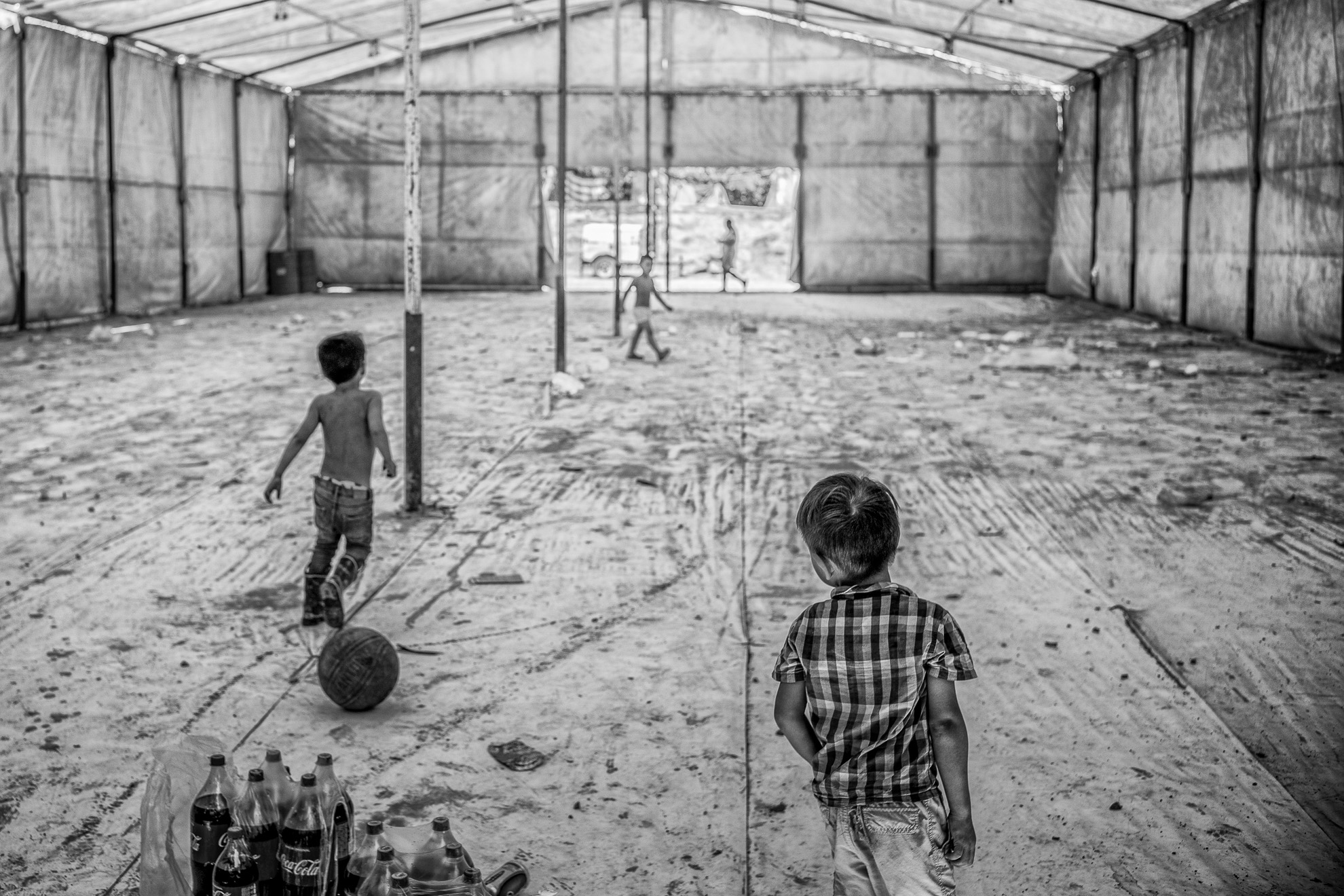 5. Salvadorian kids play inside a tent that used to be as a collective dinner room at the asylum seekers camp in Matamoros, Mexico, on Tuesday, September 1, 2020. When the pandemic started, several NGOs left the camp in a moment of most need. 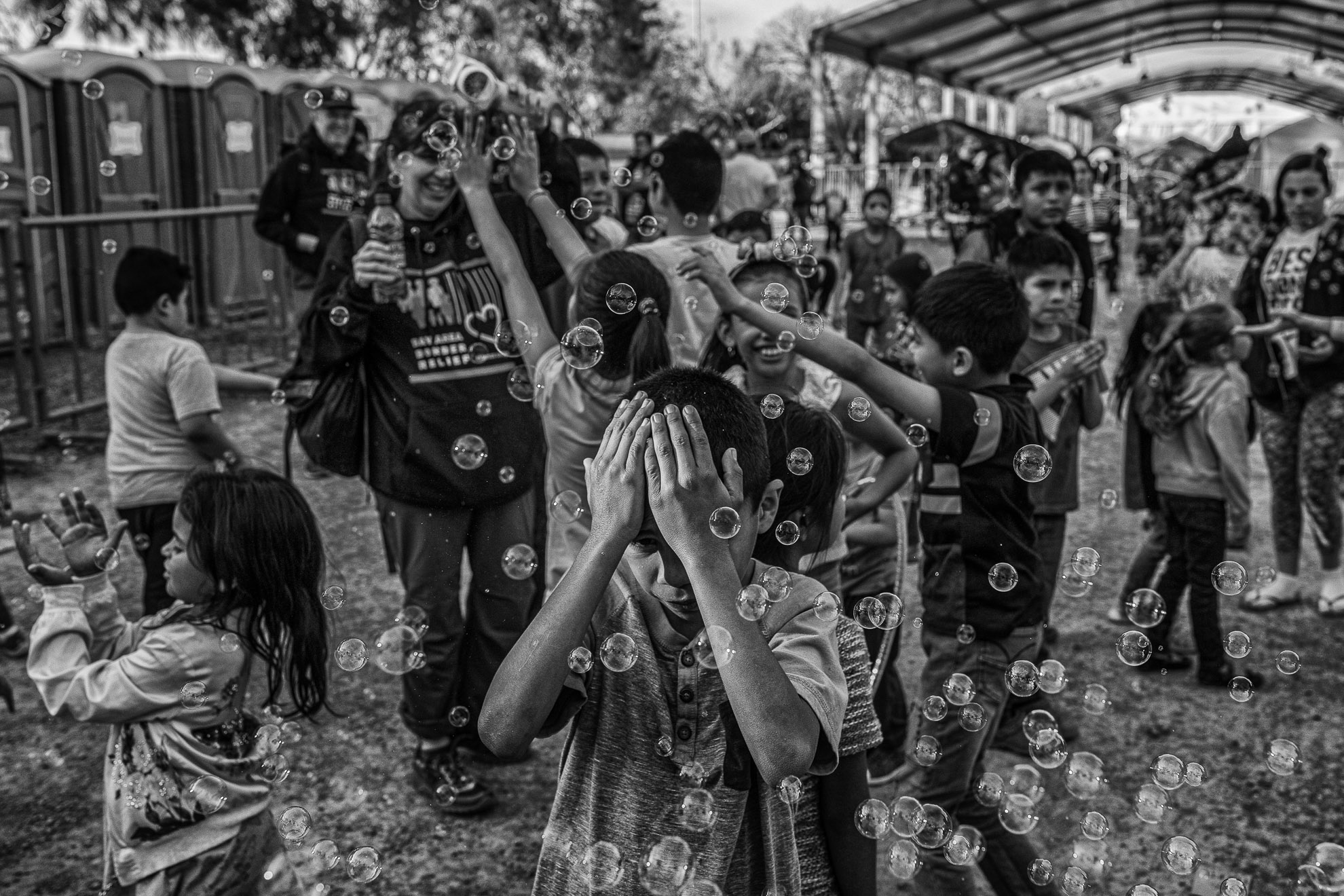 6. A boy covers his face from bubbles at an asylum seekers camp in Matamoros. 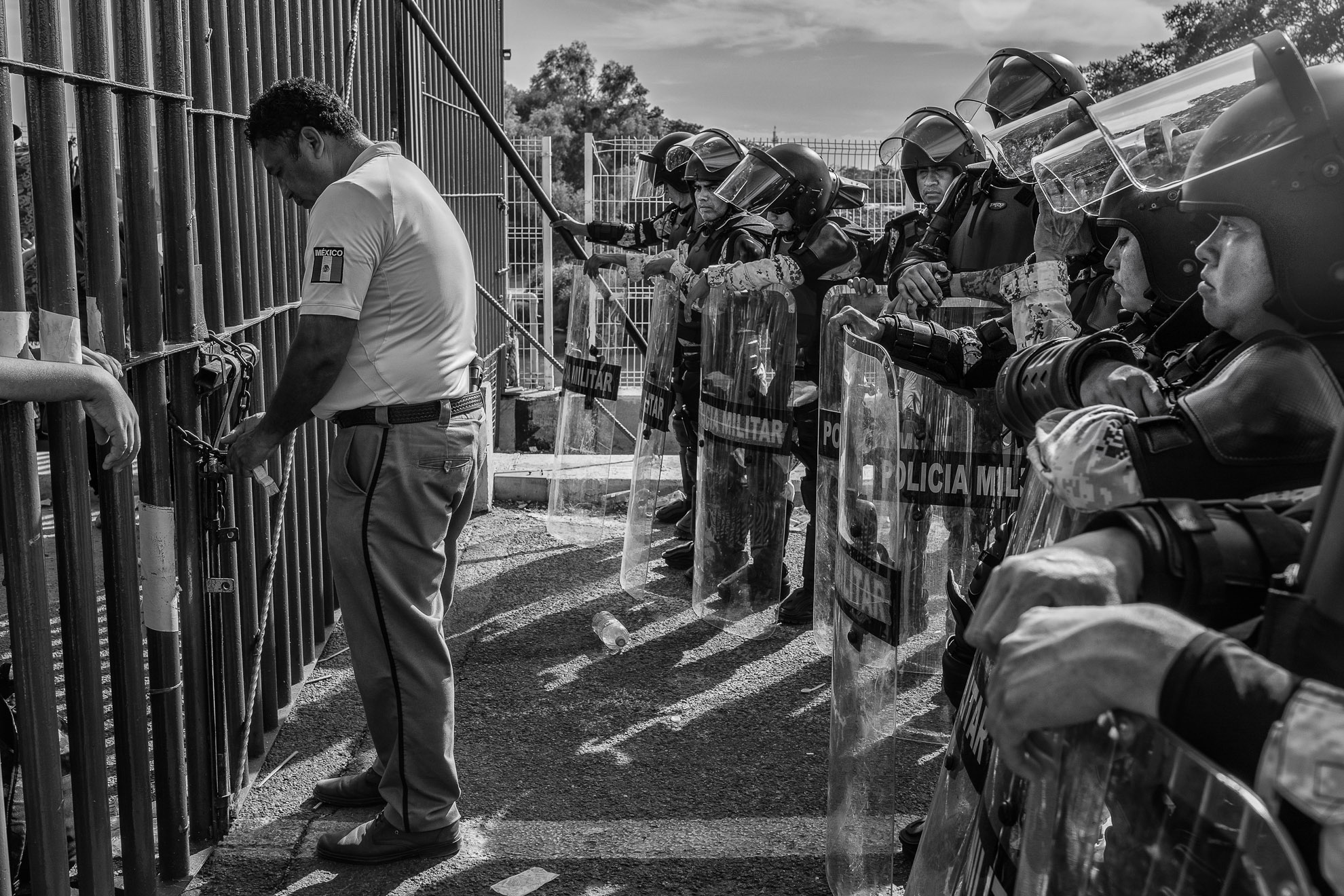 7. A migration officer closes the door of the D.R Rodolfo Robles Bridge to a migrant caravan coming from Central America towards the United States. 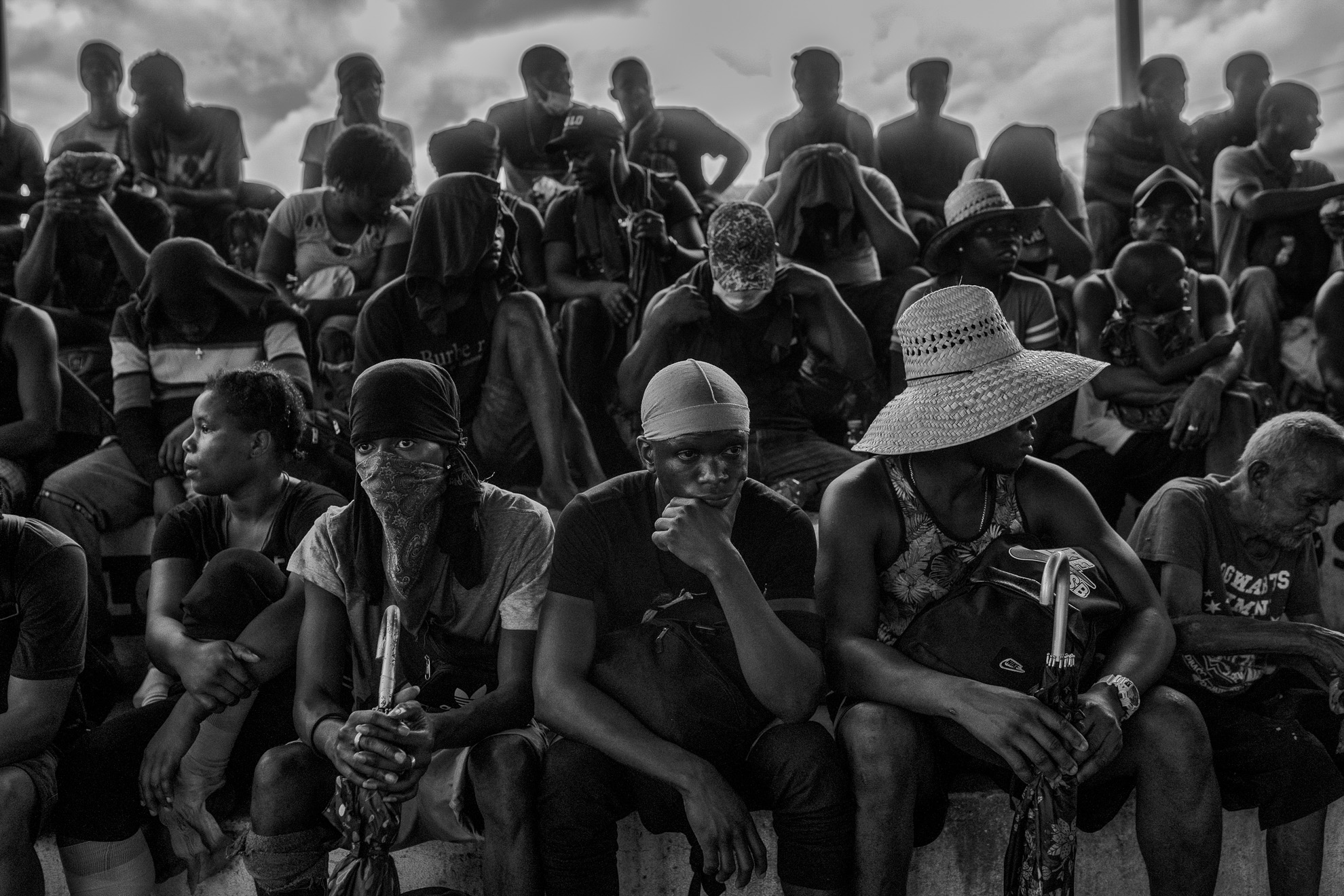 8. Haitian migrants rest after a day of walking between towns in the south of Mexico. 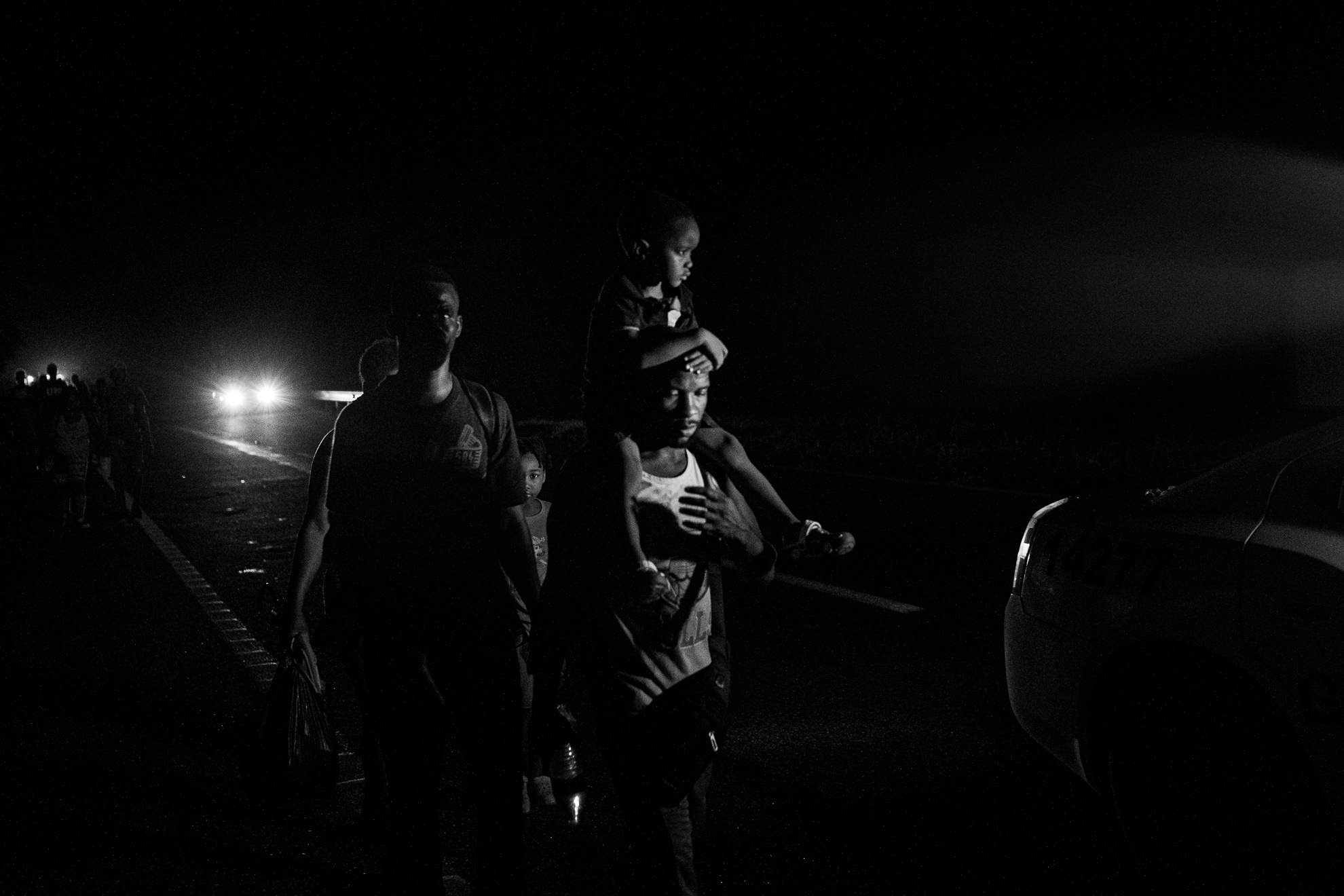 9. Haitian migrants walk escorted by a patrol of the Mexican national guard in Chiapas. 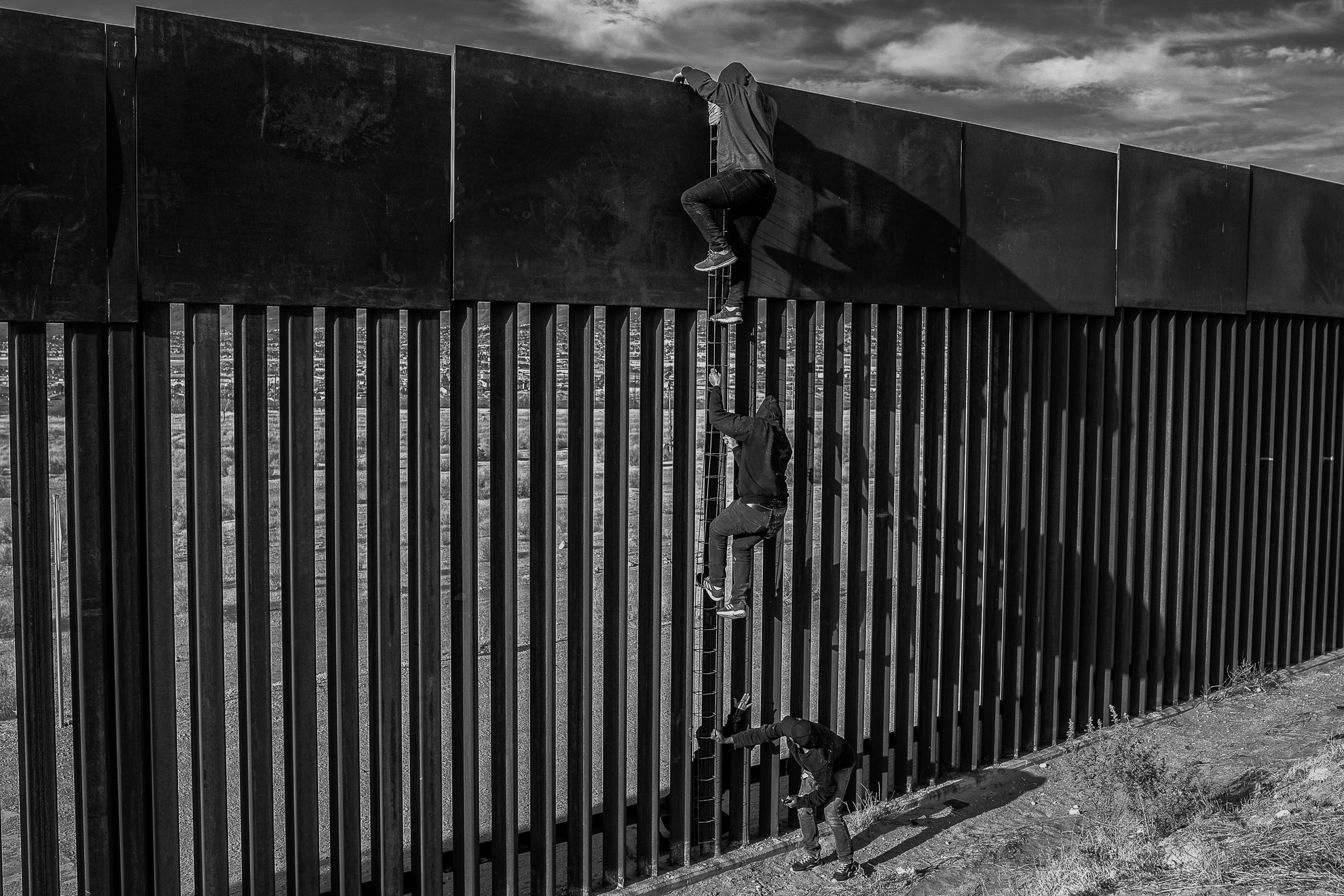 After being for many decades a safe haven for asylum seekers and having an open arms policy towards migrants, Mexico has become an important part of the United States migration policy as a co-enforcer. To comply with the pressures of different American administrations who had demanded a tougher migration policy to reduce the flow of migrants and asylum seekers bound to the U.S., Mexico militarized its border with Guatemala with a thousand of National Guards in the recent years, doing bigger and constant raids, stalling humanitarian visas and literally closed its doors to migrant caravans, having as a result of externalization of the U.S. borders all the way to south Mexico along with the anti-migration practices that characterize the southern border of the United States.

Additionally, the United States express deportations to Mexico under the “Migrant Protection Protocol” and now under “Title 42” has put at risk the lives of the asylums seekers who has to wait months for asylum hearings in makeshift camps in dangerous borders cities, usually controlled by drug cartels and corrupt authorities. As a result, a physical, administrative, psychological, and bi-national multi-layered barrier has been built to close the doors to migrants and asylum seekers coming from all parts of the world. The United States through its policy of denying asylum and Mexico as co-enforcer are building new layers of the wall for those most in need of the right to asylum, today more than ever the politics of the borders do not understand the need to flee to save the life, they are trapped in a bureaucracy alien to these realities making them increasingly distant from human rights.

Alejandro Cegarra was born in Caracas, Venezuela in 1989. He began studying photography in Roberto Mata Photography Workshop while at the same time studying Publicity at Alejandro Humboldt University. After working for a year at an advertising agency called Creative Army and only viewing photography as a hobby, he decided to pursue photography more fully. In 2012, he started filling in for other photographers at the largest newspaper in Venezuela, "Últimas Noticias".

In 2013, he started working for Associated Press in Caracas until 2016. Since then, Alejandro has been working as a freelancer for different outlets as Bloomberg, The New Yorker, The New York Times, The Washington Post, California Sunday Magazine, GEO Magazine, Volkskrant among others. He also has been published in other major media outlets like TIME, L’ Express, and LFI.

He is one of the finalists of the Luis Valtueña Award 2021. Not only that, but he has also been awarded a World Press Photo for Long-Term Projects in 2019, a Leica Oskar Barnack Newcomer award in 2014, the Ian Parry Scholarship in 2014, an emergency fund grant by Magnum Foundation in 2016, and a Getty Images Editorial Grant in 2017, among others.

His personal work wants to ponder on the sense of belonging, the loss and search for a home, from the personal experience to the collective one as also the denunciation of human rights violations in Venezuela and Mexico where now he lives. 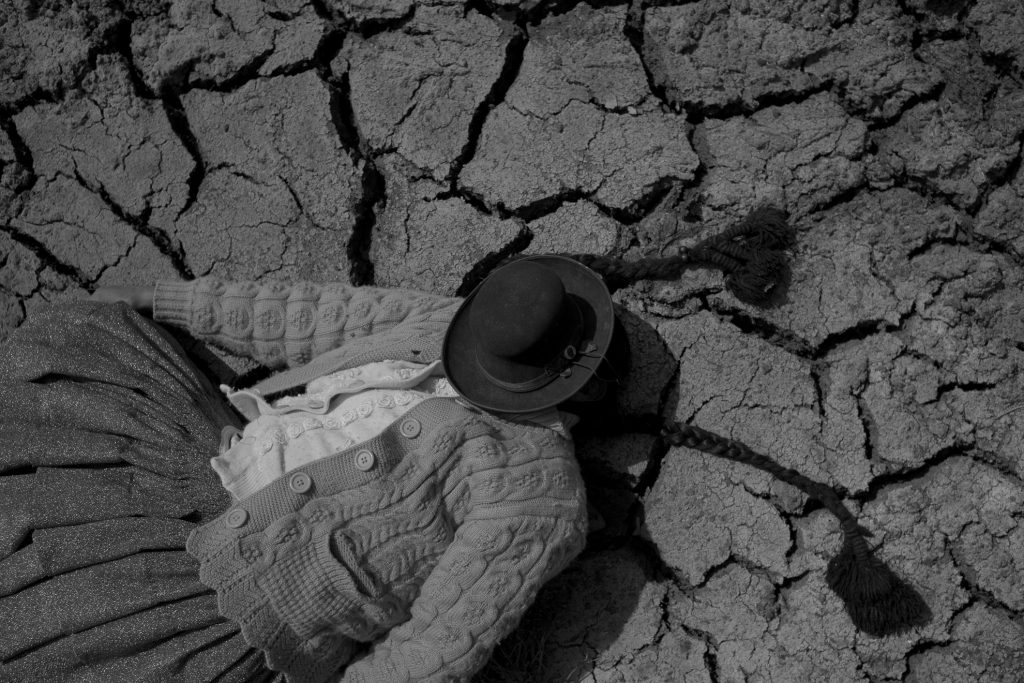