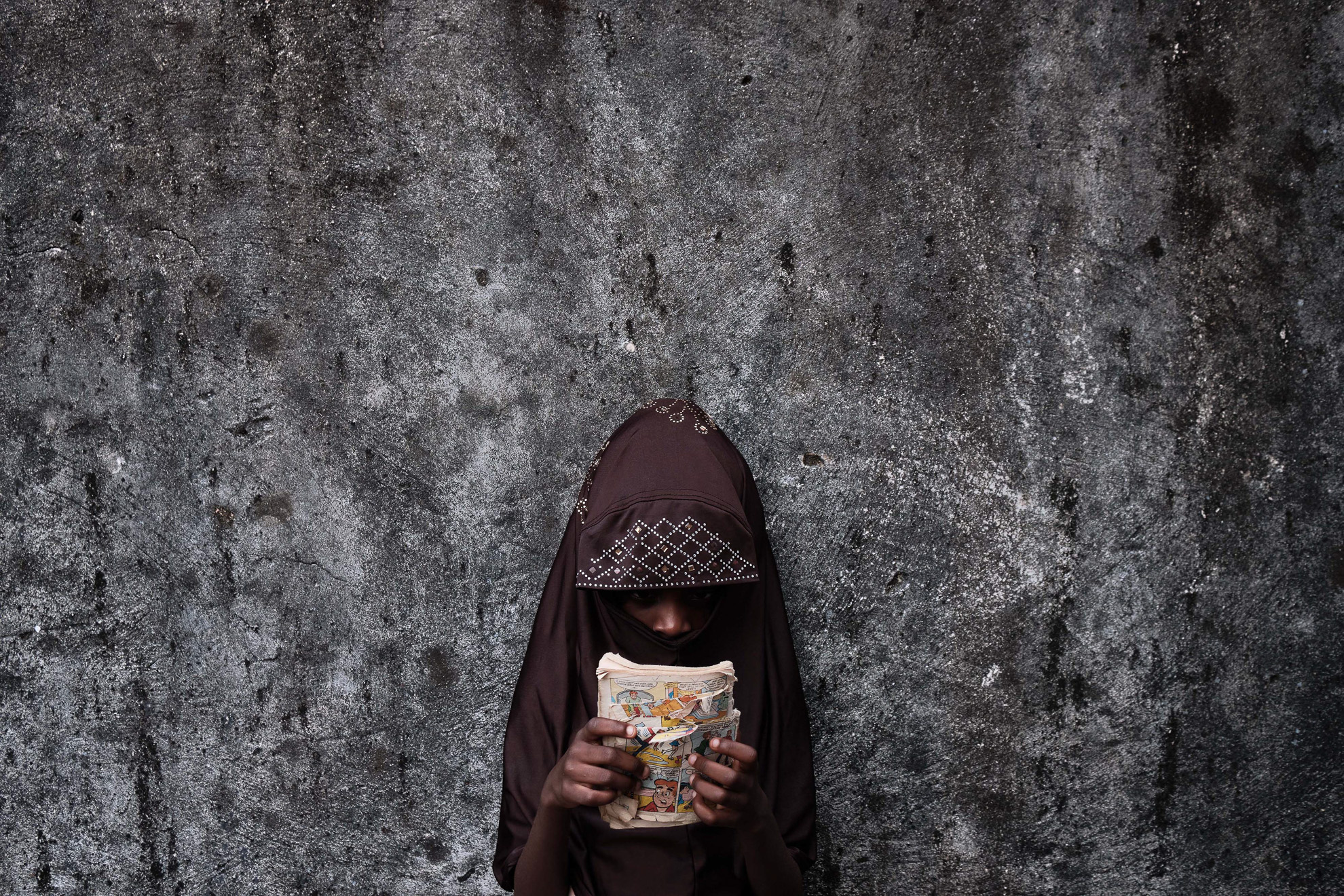 1. Fatimah is 6 years old, born in Boko Haram captivity to a mother who died during a raid. She spents time at her extended family home in Borno North East Nigeria, scanning pictures of a comic book 'Archie', hoping that one day she will go to school. 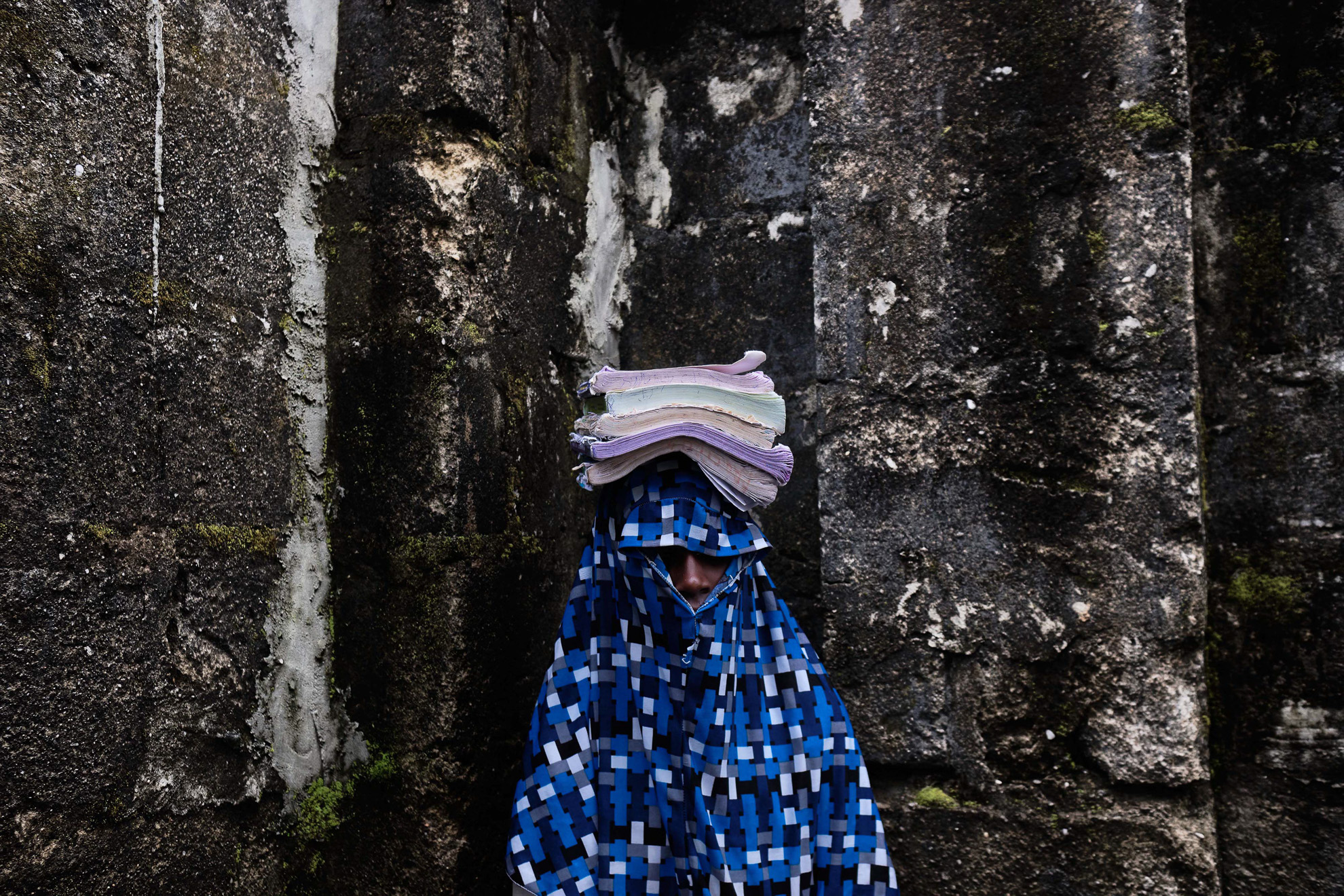 2. Jamilah (fictitious name) 14, from North East Nigeria, abducted by Boko Haram after a raid in their farm that left her father half blind . She was raped by 7 men her first night in captivity which left her bleeding continuously for nine months. In poor health, she was left to die but found by vigilantes. She attends lesson organised in a make shift school. She dreams to become a doctor. 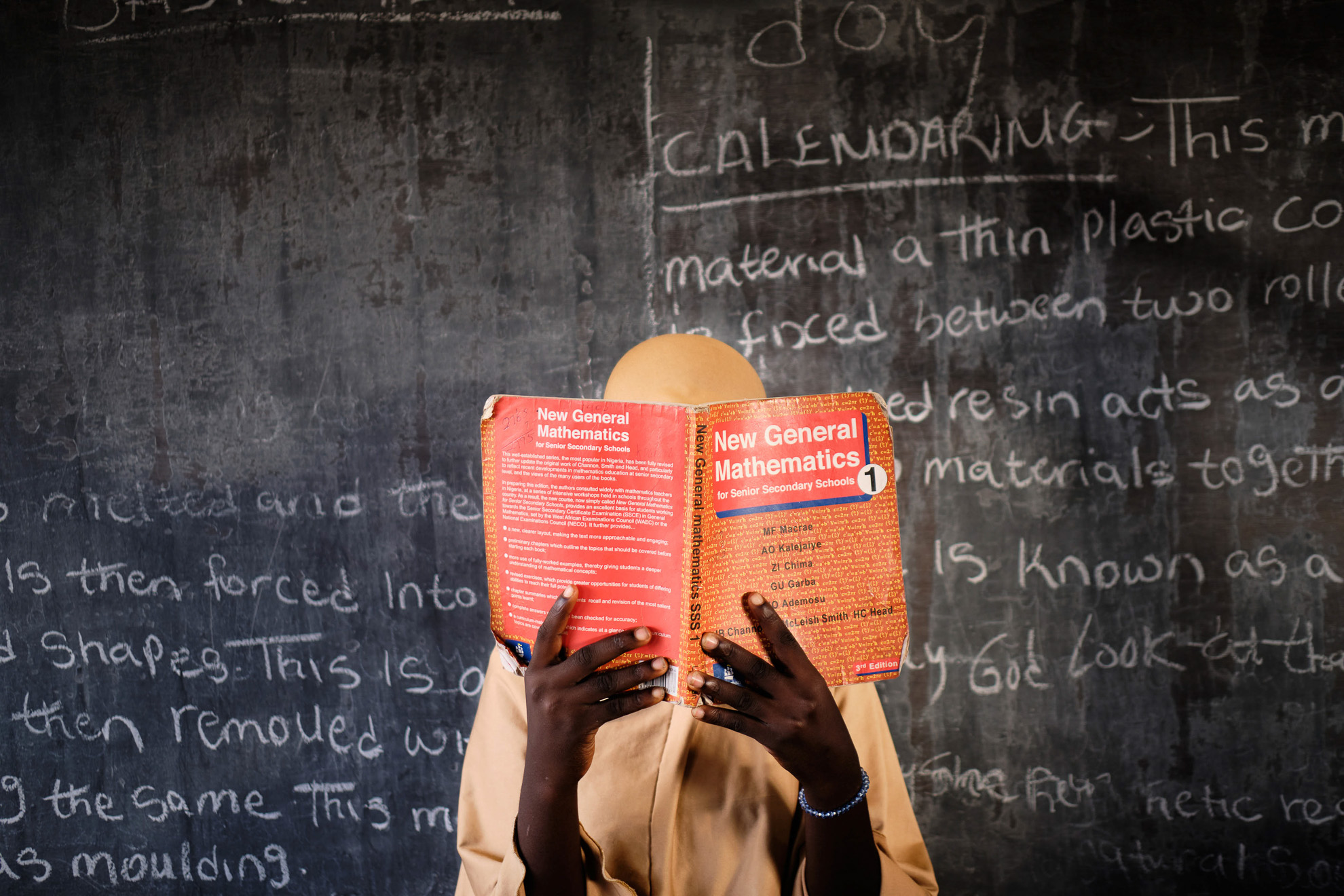 3. Amina (fictitious name) is 16 years old, her parents were killed in a raid in their home in North East Nigeria. She was abducted by Boko Haram, then married off to a terrorist commander. She spent her quiet time recalling mathematical formular she studied in school. In freedom, her uncle enrolled her in a school. She wants to become a teacher. 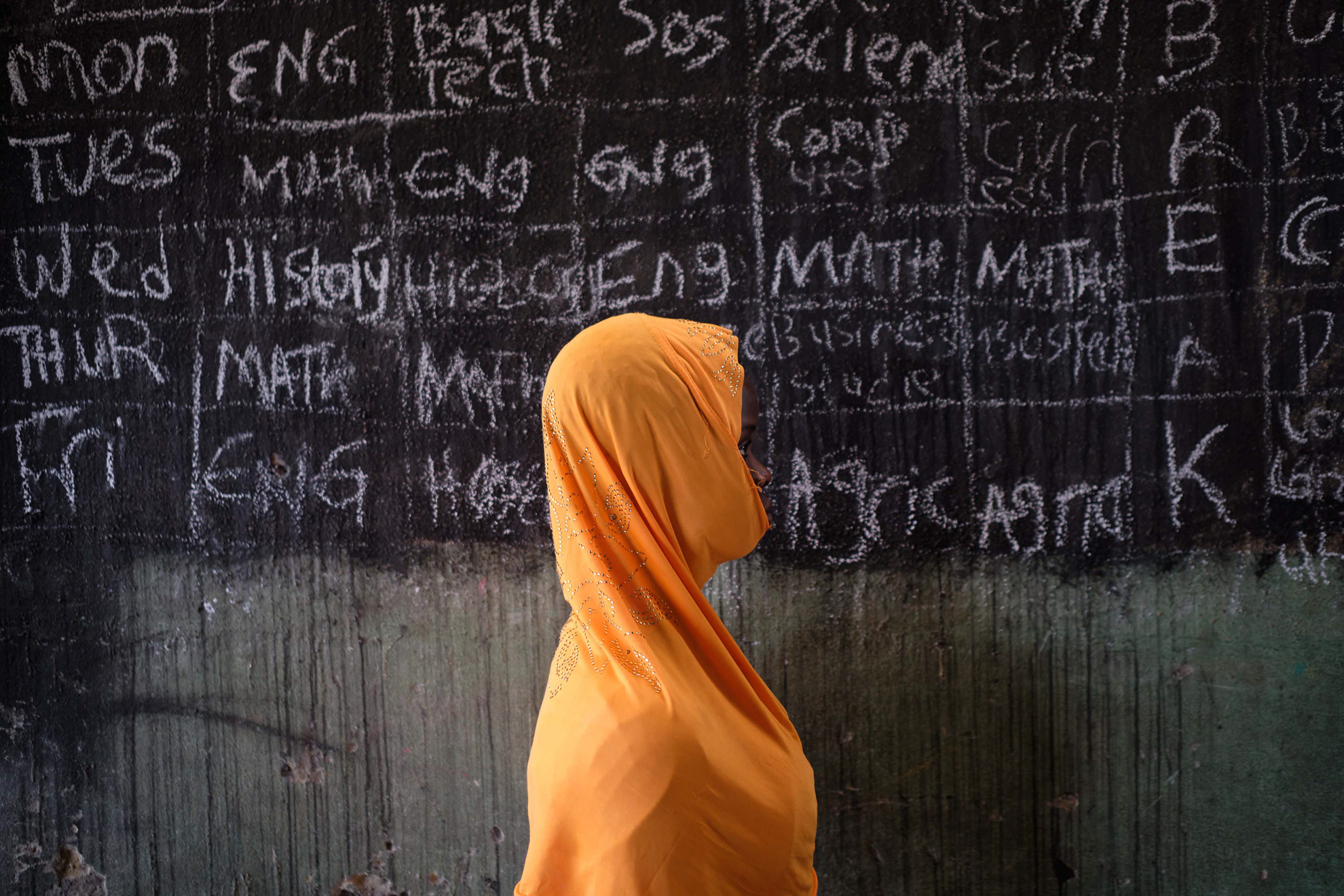 4. Ladi (fictitious name) is 16, born in North East Nigeria. She was abducted by her uncle a Boko Haram sympathizer. She was married off two times to two terror group fighters who died in different military base attacks. Without her husband to protect her, she was strapped with a bomb to detonate in a church. She survived and spends time collecting pens as she believes the pen is mightier than the sword. She wants to become a writer. 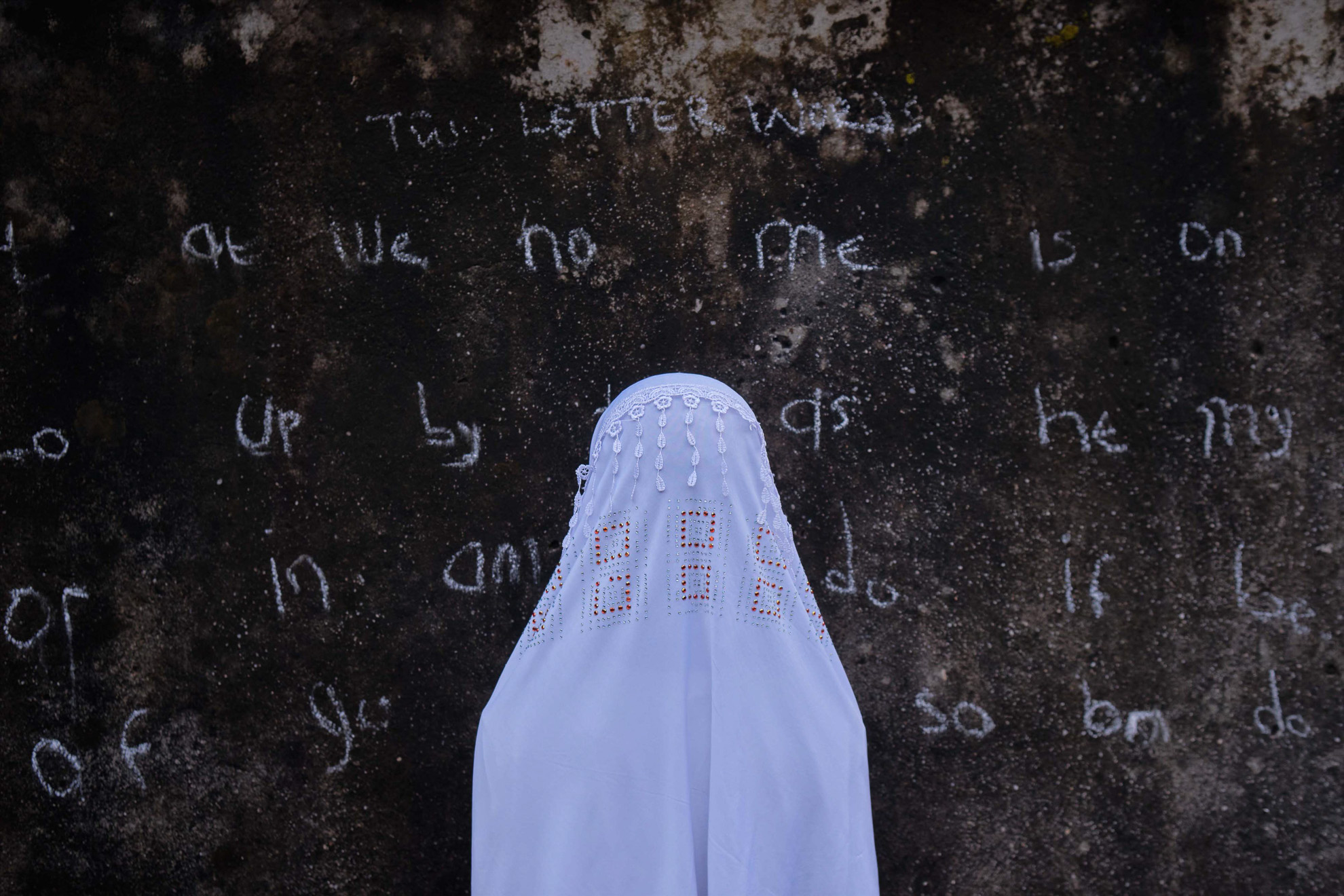 5. Aisha (fictitious name) 16 years old, in North East Nigeria, was kidnapped by Boko Haram when she was 13 years old and trained to be a suicide bomber. Before she was abducted, her father didn't send her to school, she teaches herself letters and words at home as her poor father couldn't send her to school. She wants to become a teacher. 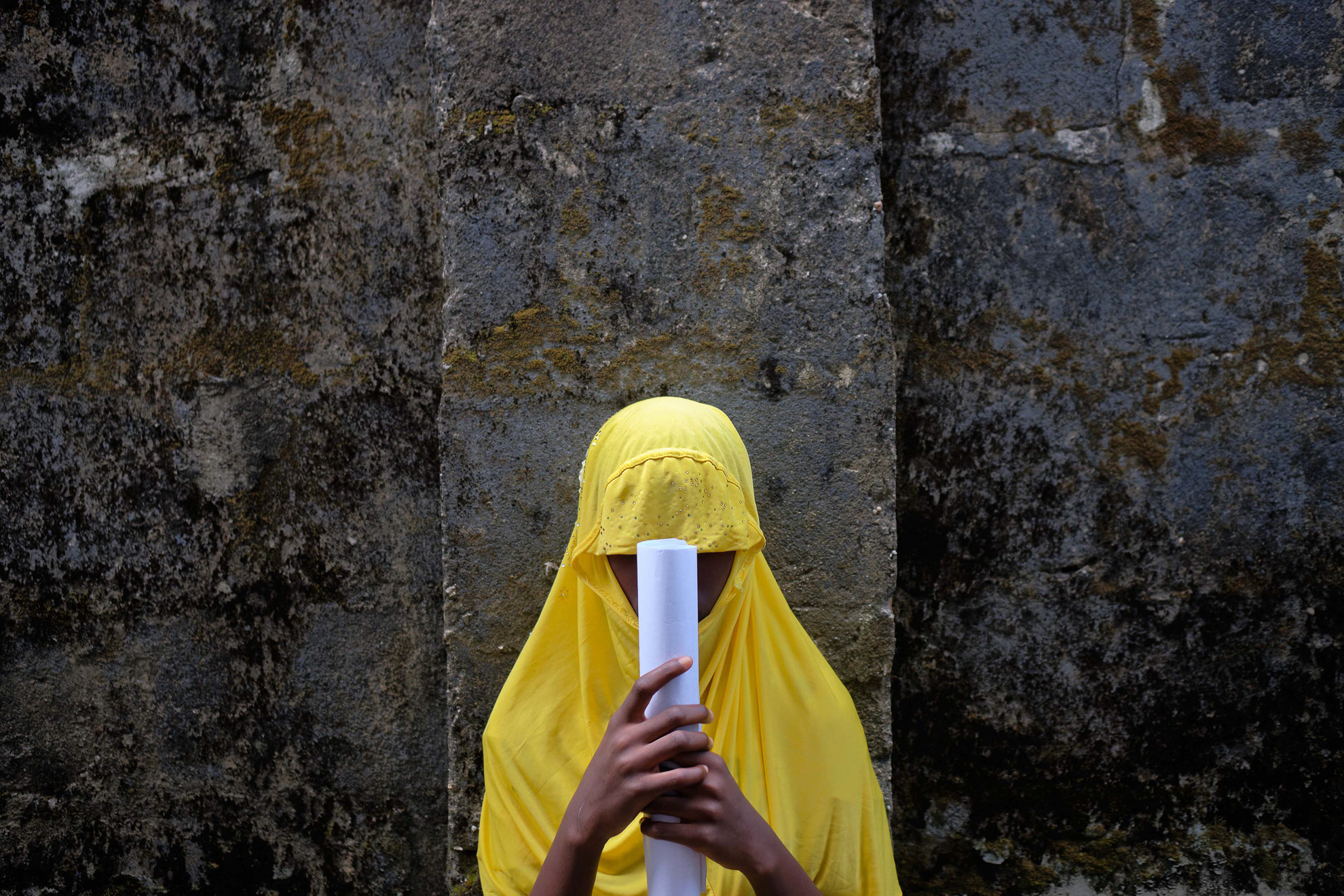 6. Zainab (fictitious name) 17, was abducted by Boko Haram after razing down her school in North East Nigeria . She was radicalized and was shot by a security personnel when she tried to detonate the bomb strapped to her chest in a mosque. Today she treks 3 miles to another community school to study. She plans to become a school counsellor. 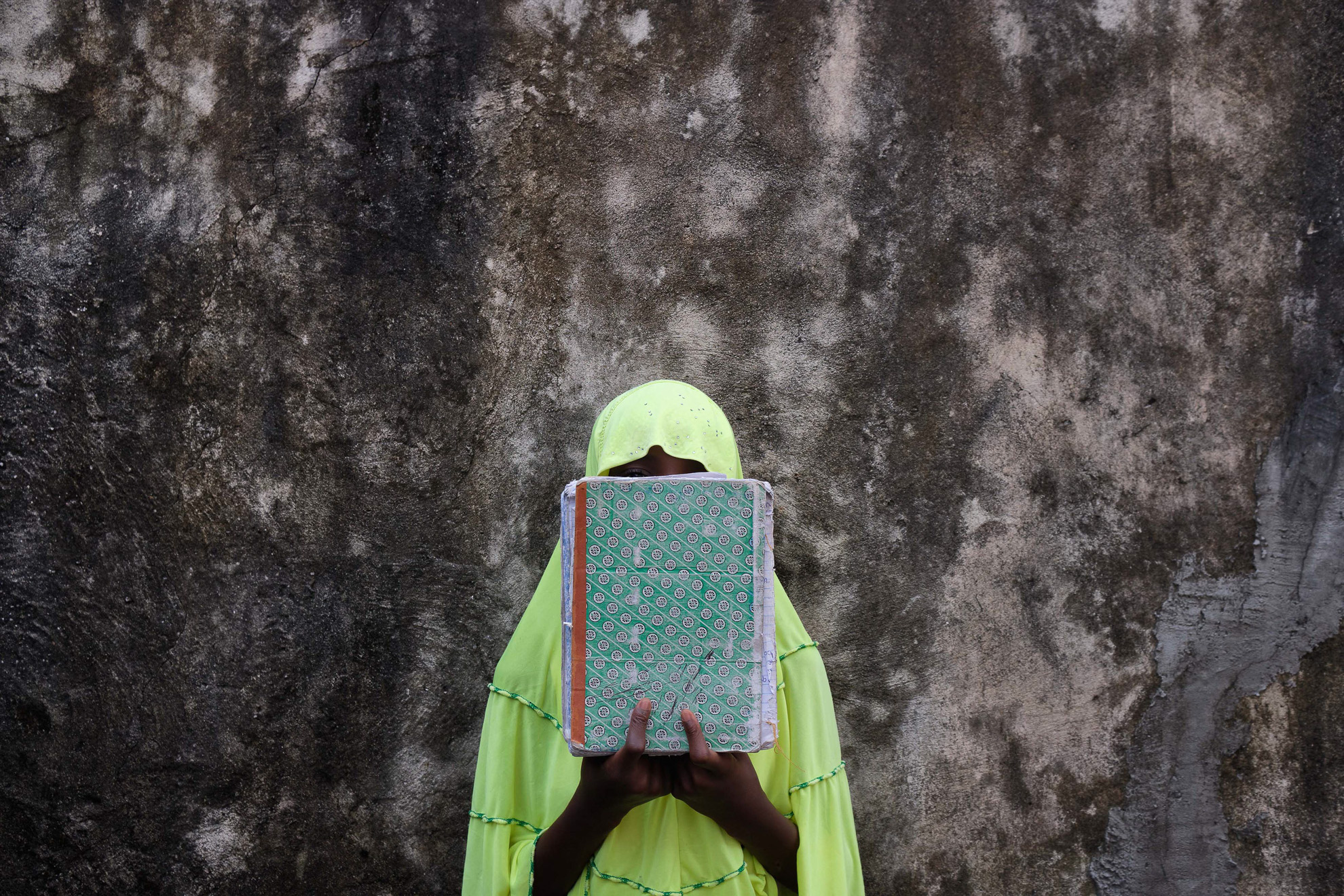 7. Fanti (fictitious name)15, from North East of Nigeria, in North East Nigeria, in Book Haram, she was radicalized to hate western education. In freedom, she attends school, she plans to become a nurse. 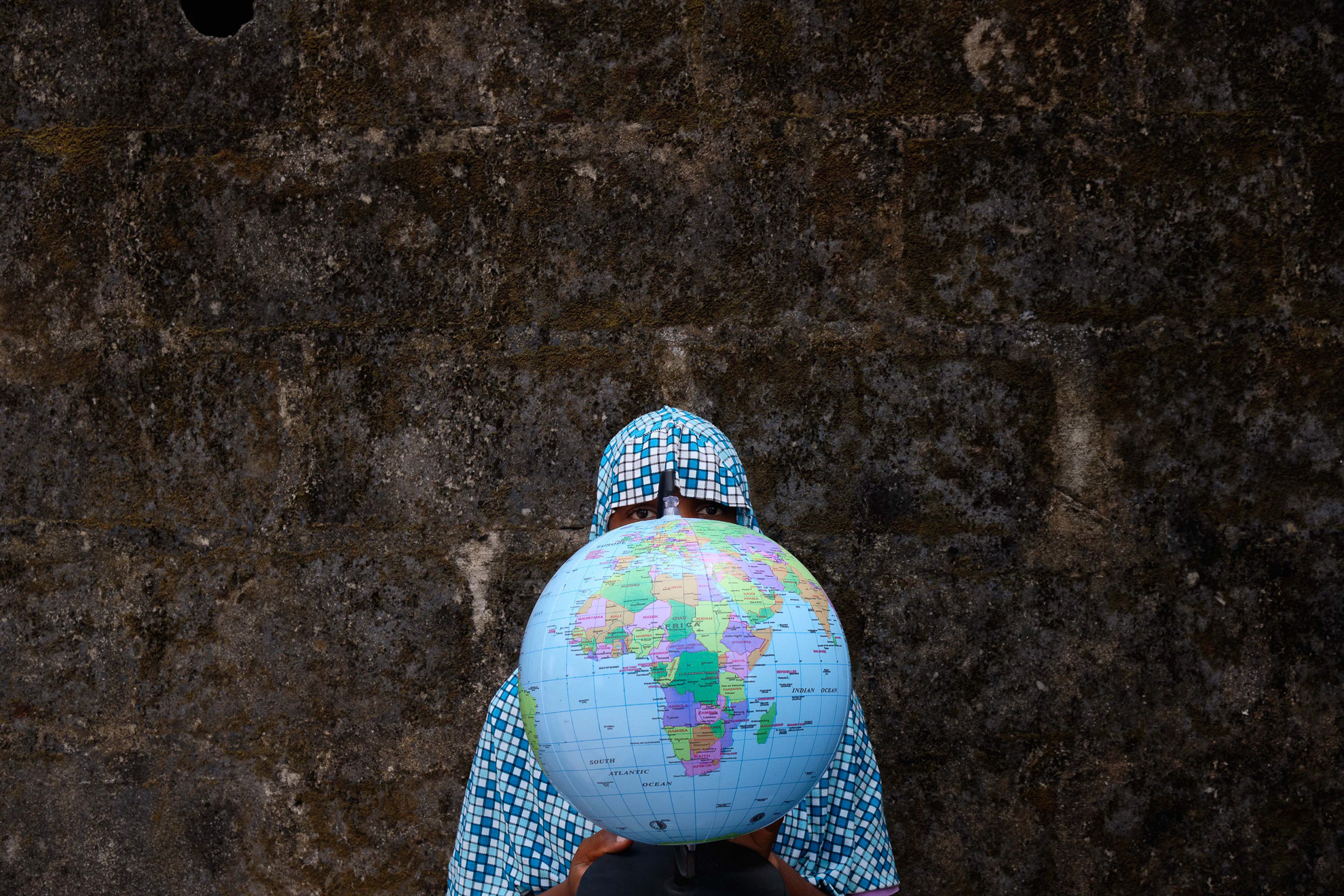 8. Hassana (fictitious name) 16 years old from North East Nigeria, kidnapped by Boko Haram with her twin sister who died in the terrorist camp. She returned home to find her village ravaged and parents killed by Boko Haram. She loves to study the globe, she hopes to travel the world someday because she believes its part of education. 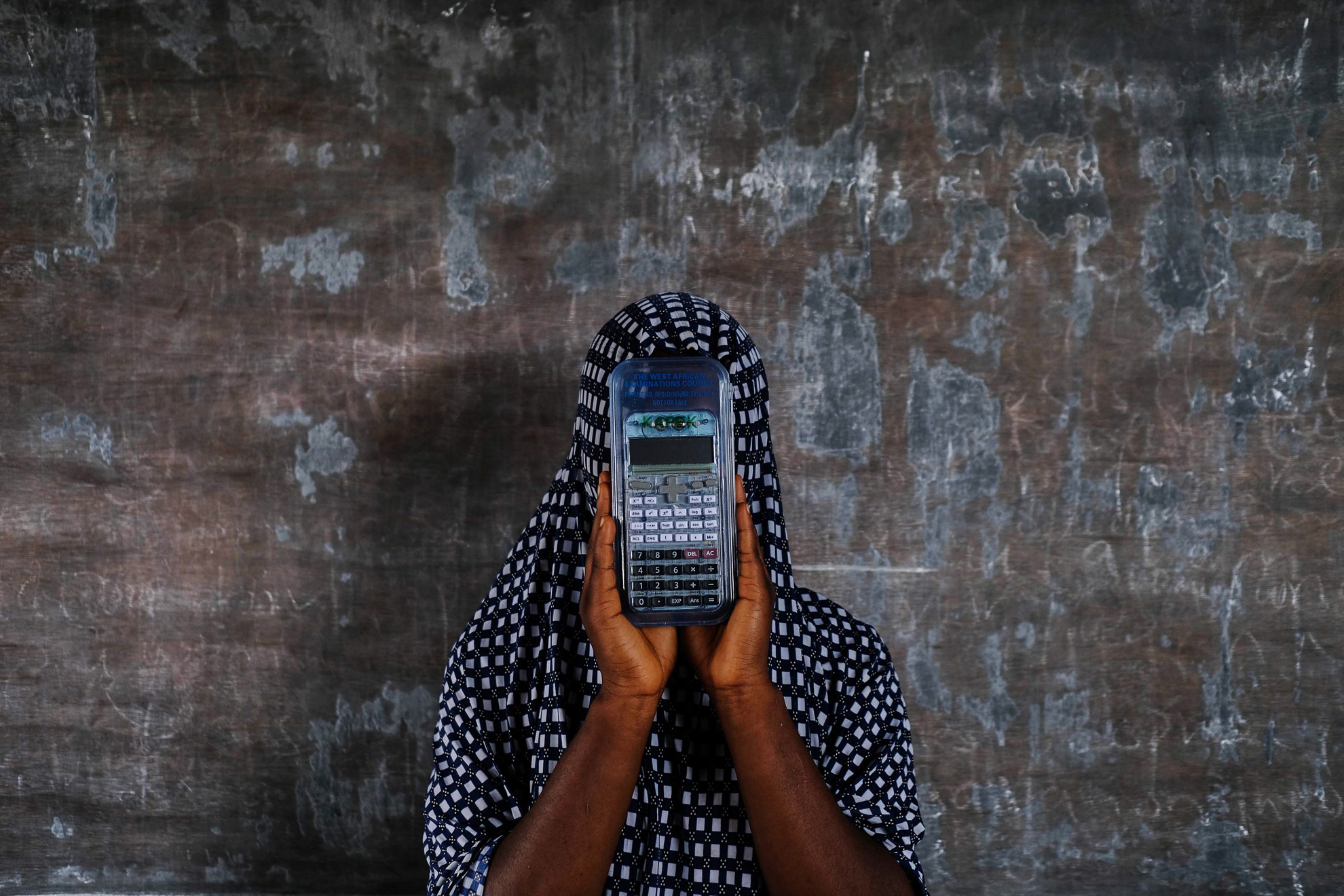 9. Zahrah (fictitious name) 17 years old from North East Nigeria, abducted by Boko Haram. She was 15 years old when the terrorist group abducted her on her way to school, she refused to detonate the bomb strapped to her chest by the terrorist group, she attends a lesson organized by a retired teacher in her village ravaged by Boko Haram. She wants to become an accountant. 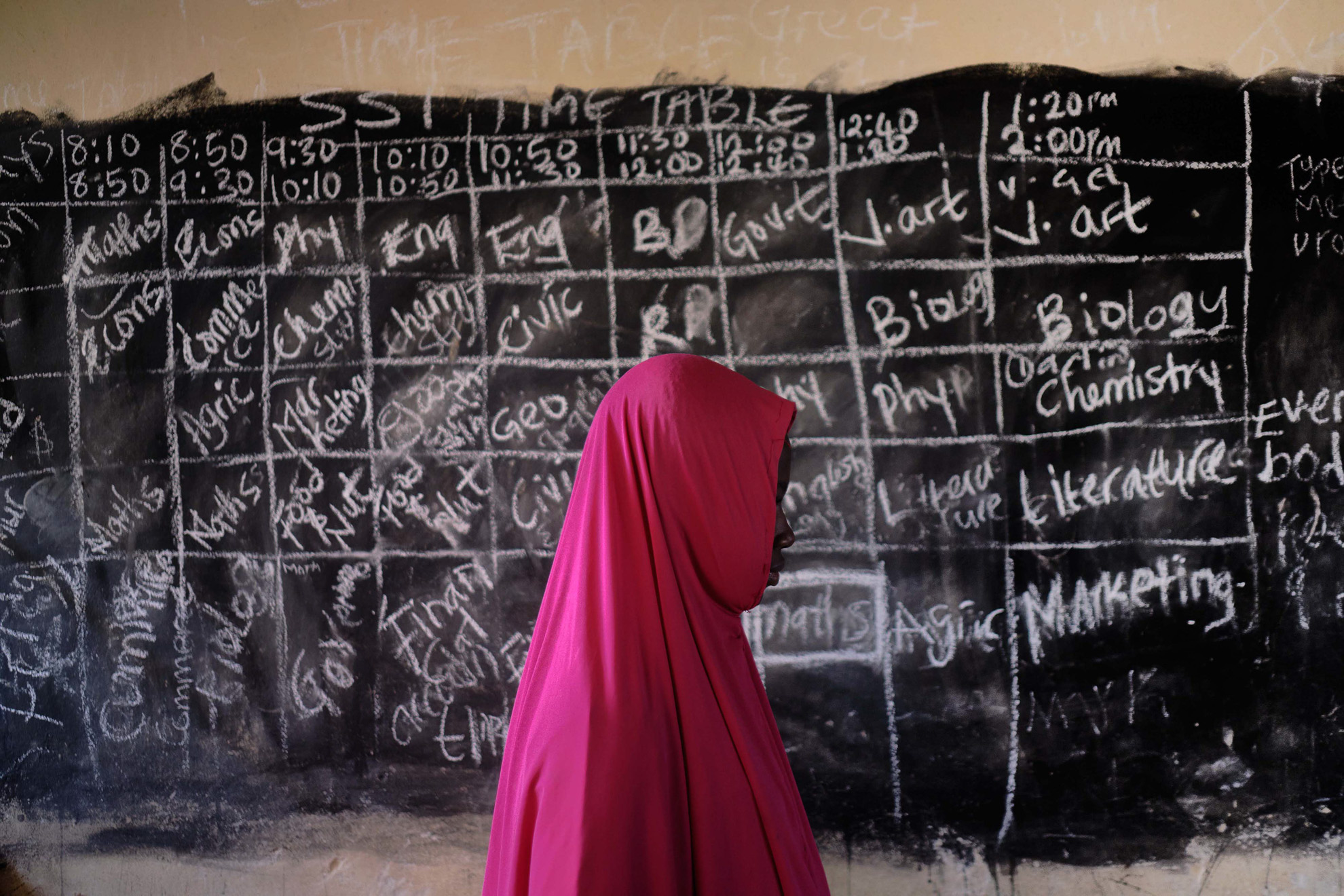 10. Balarabe (fictitious name) 17, she was raised in North East Nigeria, brainwashed by Boko Haram to hate western education. She enrolled in a school after she regained freedom. She plans to become a nurse like her sister.

Boko Haram is an Islamist terrorist group that operates ruthlessly in northeast Nigeria. In addition to committing atrocities such as invading communities, killing innocent people, burning down houses, schools, and places of worship, it has kidnapped dozens of girls of various ages.

During captivity, they are forced to spend several hours a day in indoctrination sessions in order to radicalise them against Western/secular education because they fear that they will learn to think independently and challenge the authority of Islam.

The intensity of the programme can be better understood through the testimonies of some of them. This paper presents the stories of 10 girls who managed to escape this horror.

“We were abducted because of the choice we made: to go to school,” murmured Amina (not her real name*), who was abducted along with 13 other girls on her way home from school.

They say that the radicalization sessions were endless; the aim was to erase the memory they had of their classes: the rhymes, the alphabets, and the letters they had learned.

Some girls were released when they were unable to detonate the bombs that were tied to their waists and turned themselves into the security authorities, while others were released after military incursions into their camps.

Upon returning from captivity, many of the girls were traumatized and stigmatized. Even so, some still had the courage to return to Western education. This group of girls persevered in the face of the drama, economic hardship, Islamic extremism, and cultural and gender biases to dare to return to school and get an education in the midst of bleak realities.

*Fictitious names have been used to protect the girls’ identities.

Emeke Obanor [b. 1972, Delta State, Nigeria] is a rising self-taught photographer based in the oil-rich, but crisis-torn Niger Delta region of Nigeria. A literature teacher by day, he is committed to showing the world the atrocities happening to girls in his region by Boko Haram, a ruthless terrorist group operating in northeastern Nigeria.

Obanor is also working on a sequel of "Heroes" and other projects to draw attention toward the issue of global climate change, and migration as a direct result of social problems.

His photographs have been exhibited in Nigeria and abroad. In 2020, he was featured with his Heroes series in Rolling Stone Magazine, F-Stop Magazine, and Social Documentary Network. This year he has also been awarded the Michael Reichmann Grant, the 2020 Critical Mass Award, and received the Special Mention for Best Photography Project from Obbiettivo Solidarietà for his "Tree of Freedom" series. In 2008, Emeke Obanor won the first prize in “Unbreakable Nigerian Spirit” a competition organized by the African Artist Foundation. 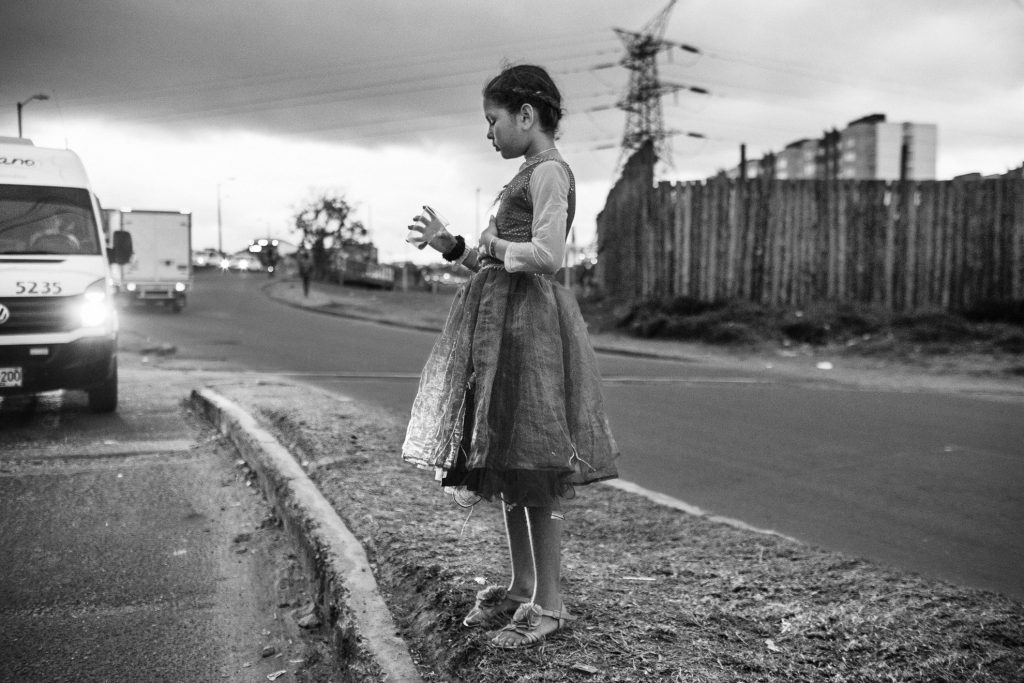