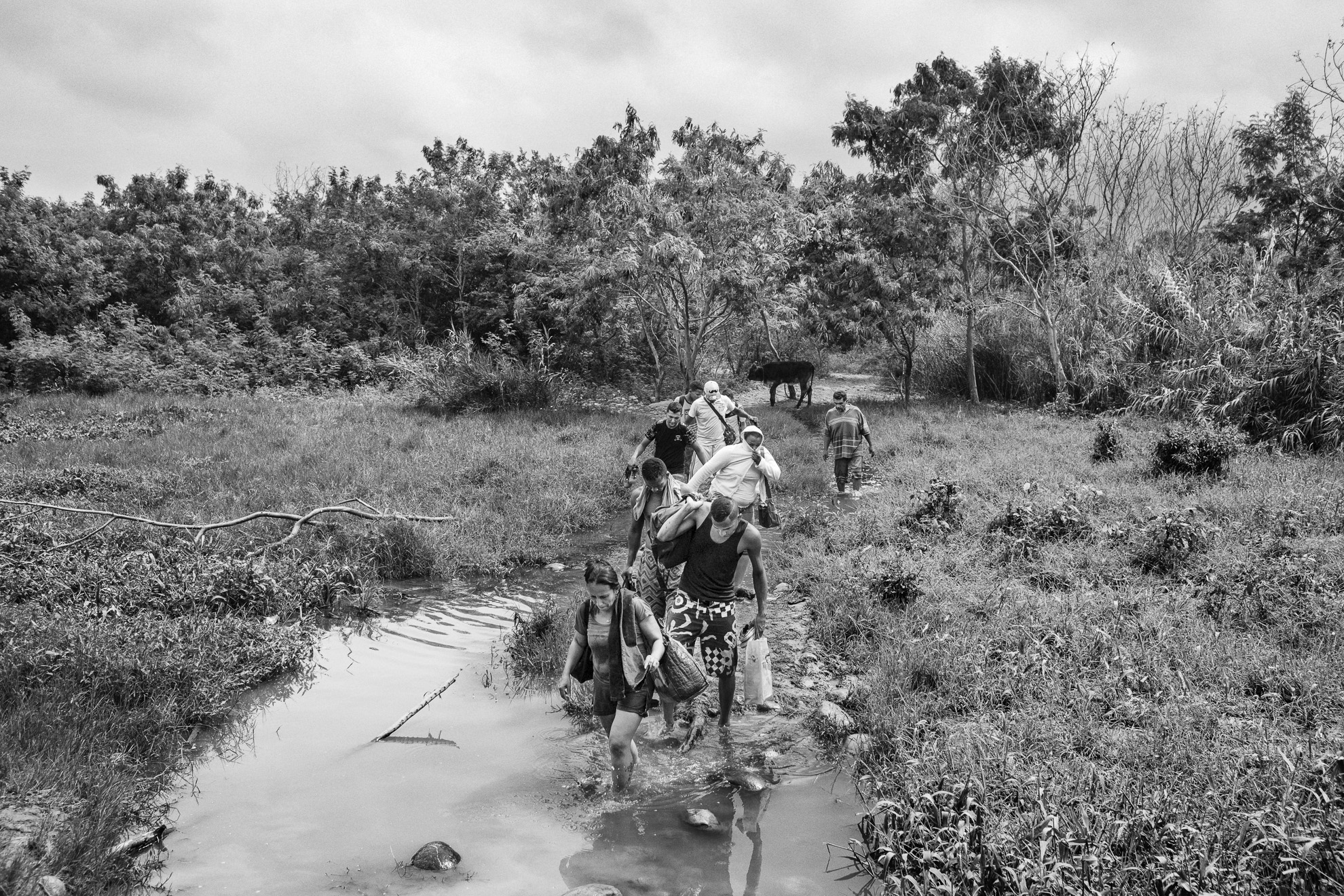 1. People follow a path to enter Colombia illegally, near Villa del Rosario in North Santander, Colombia, one of the busiest regions for border crossings. The political frictions between the two countries make it hard to coordinate the passage of people. Many take the chance to pass through illegal dirt roads, paying a tool to the Colombian-Venezuelan gangs controlling the border regions. Human rights violations, rape, and tortures committed by gang members and Colombian and Venezuelan officials have been denounced by UNHCR and by Colombian journalist as well, in 2020. 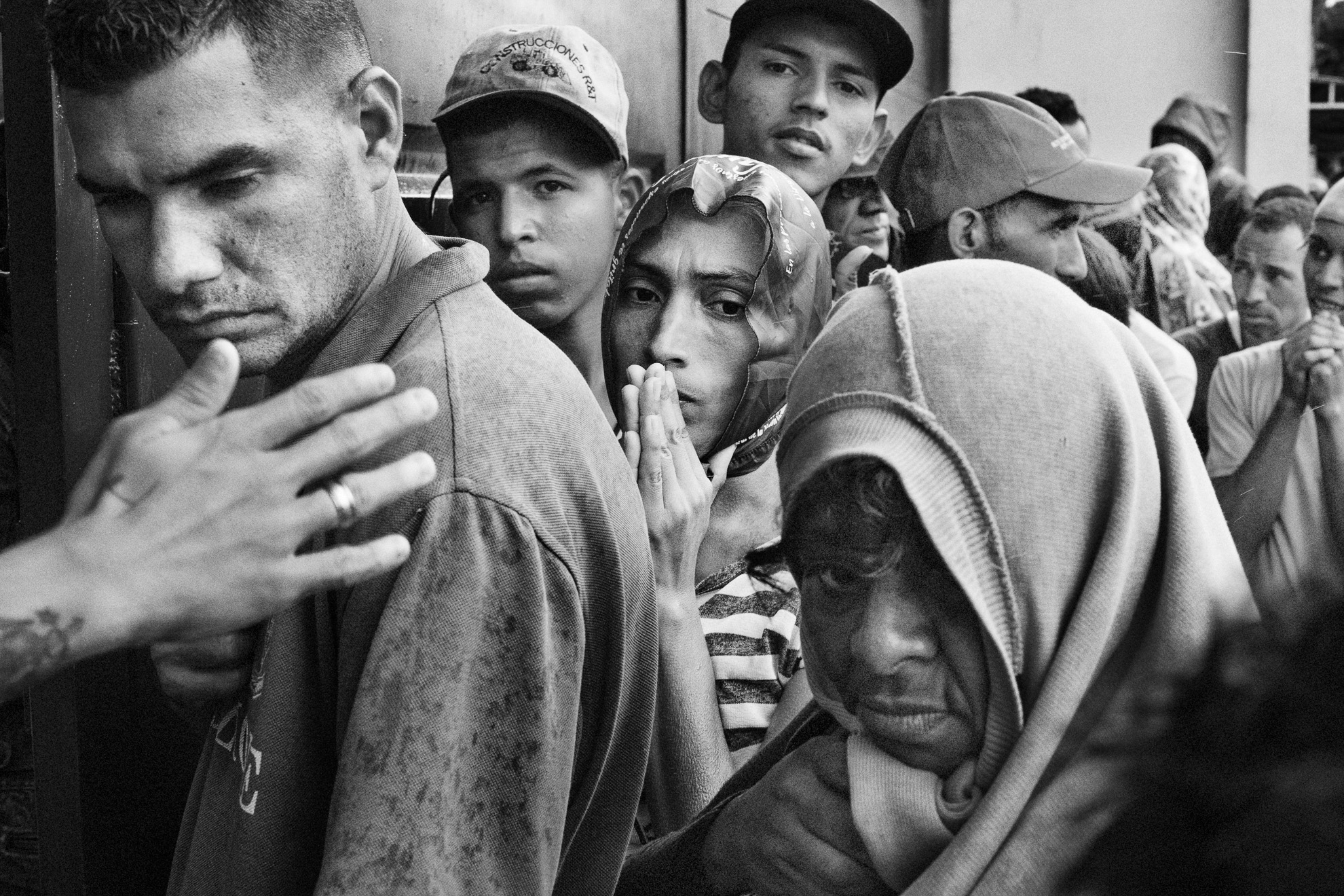 2. People wait in line for a free meal at a church charity organization, in Villa del Rosario, Colombia. Since March, as a lockdown to prevent contagion was imposed in Colombia, community refectories have been closed, making it more difficult for charity organizations to reach the migrants and to offer them free food. 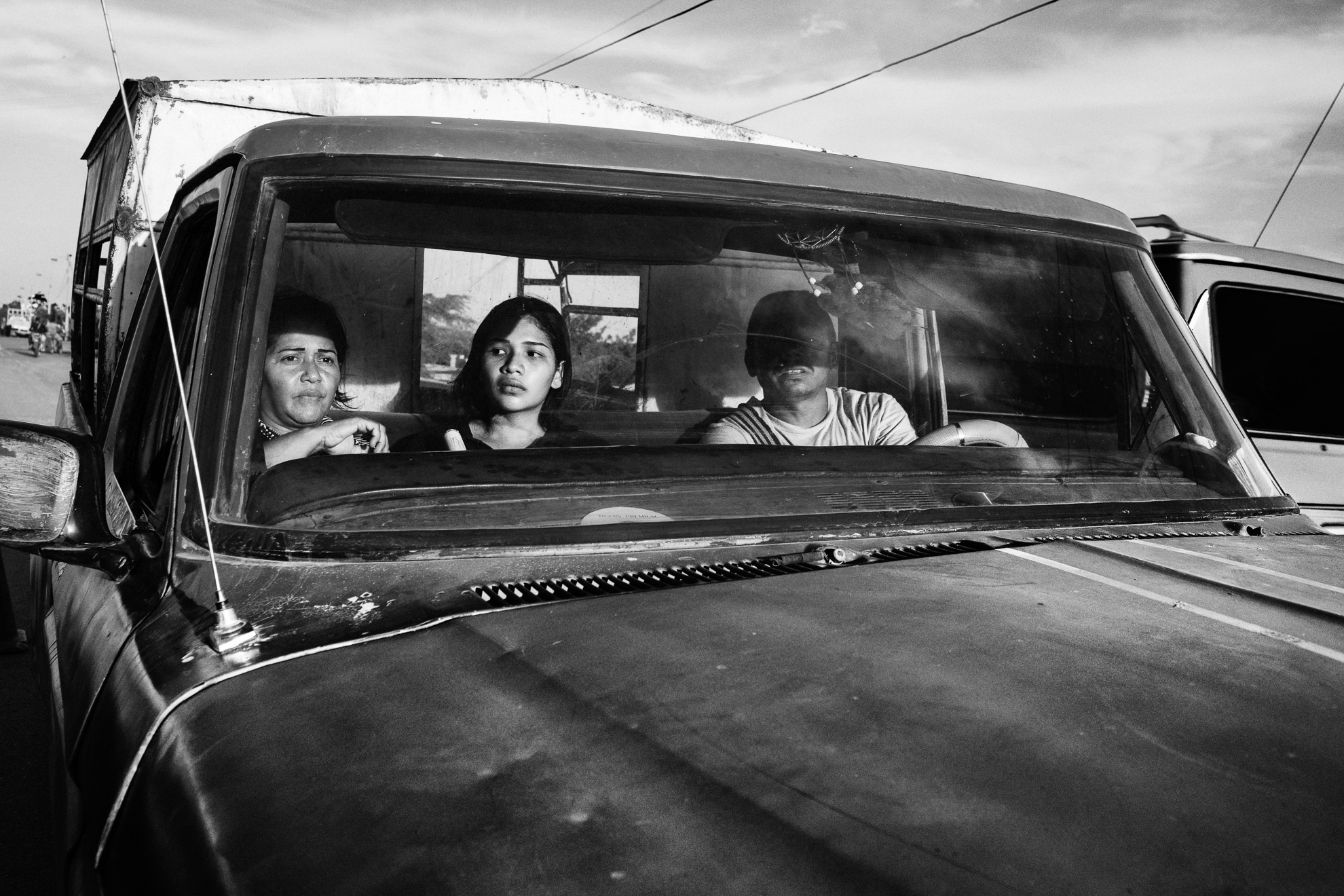 3. Migrants sit in a truck at the border town of Paraguachón, Colombia, waiting for a ride to the major city of Maicao. 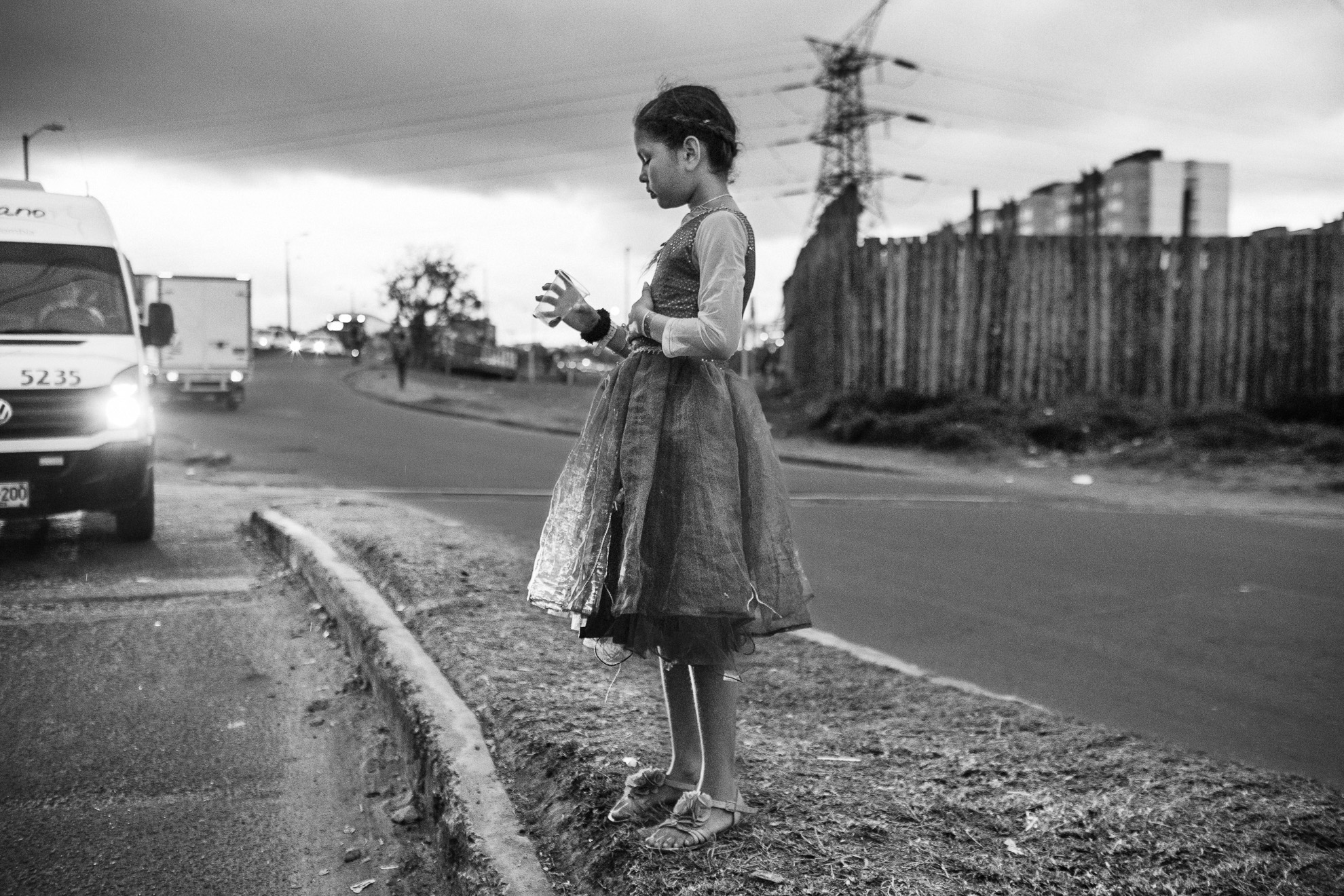 4. A young girl asks for money on a street in the Colombian capital, Bogotá. By June 2019, the Colombian Institute of Family Welfare (ICBF) had provided attention to nearly 80,000 Venezuelan children, adolescents and families countrywide. 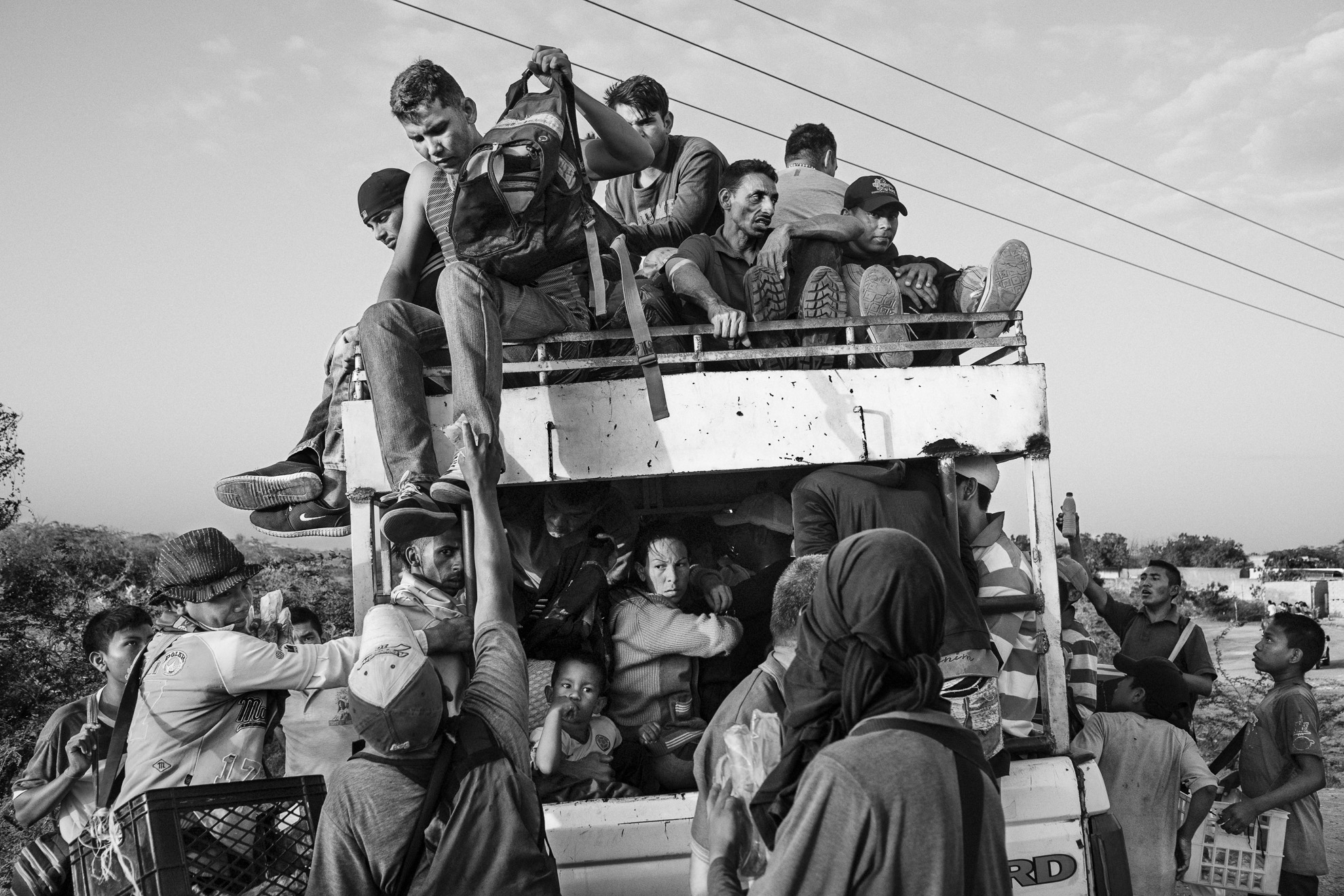 5. Migrants crowd onto a truck at the entrance of an illegal dirt road connecting Colombia and Venezuela, in La Guajira, Colombia. Even though Venezuela officially closed its land border with Colombia in February (2020) around 300 clandestine crossing points remained active. More than half of Venezuelan migrants in Colombia lacked regular status, and so had no access to health, education, or legal employment. 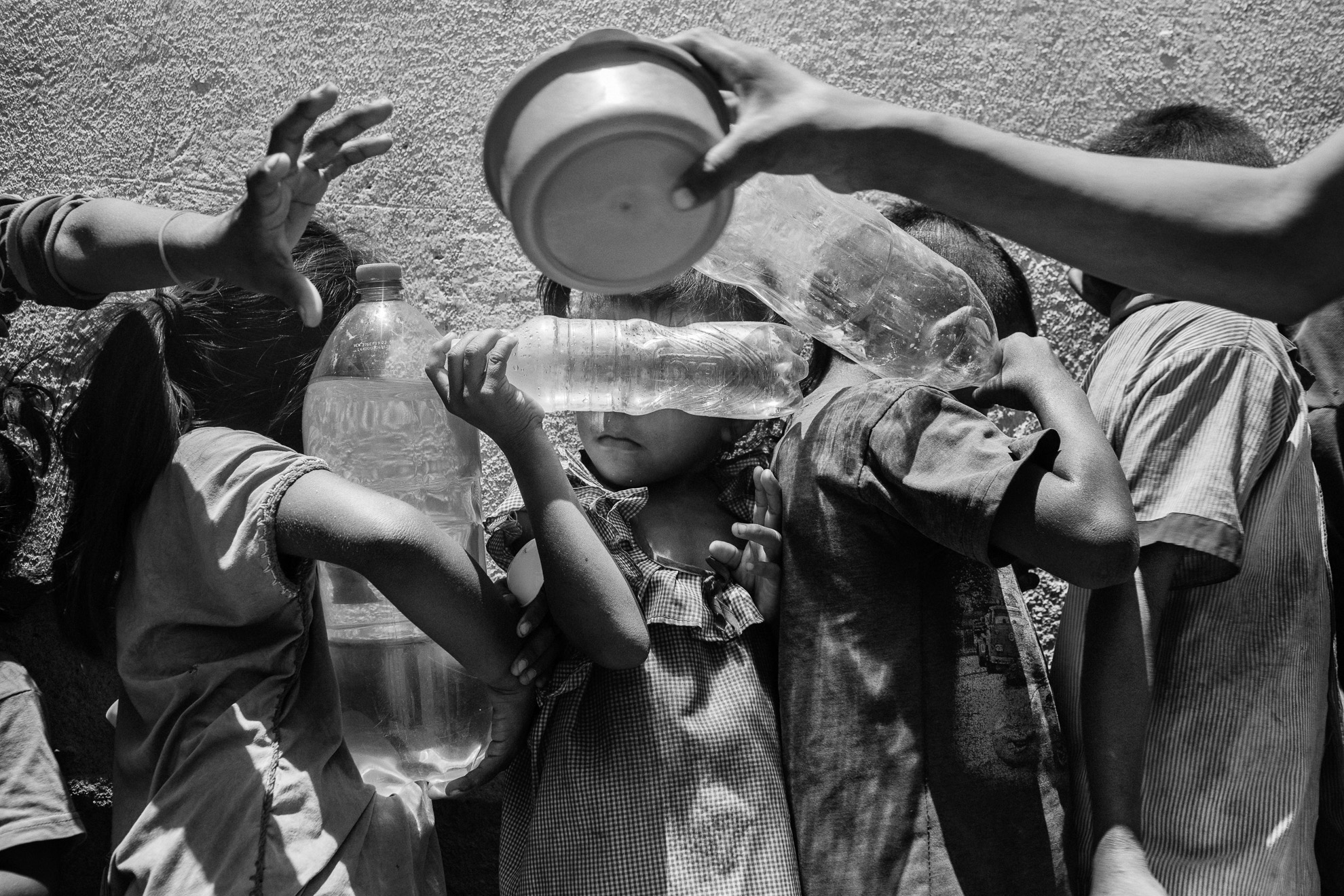 6. Venezuelan children holding plastic bottles to be filled with water wait in line for a free meal at a charity organization in Paraguachón, Colombia. 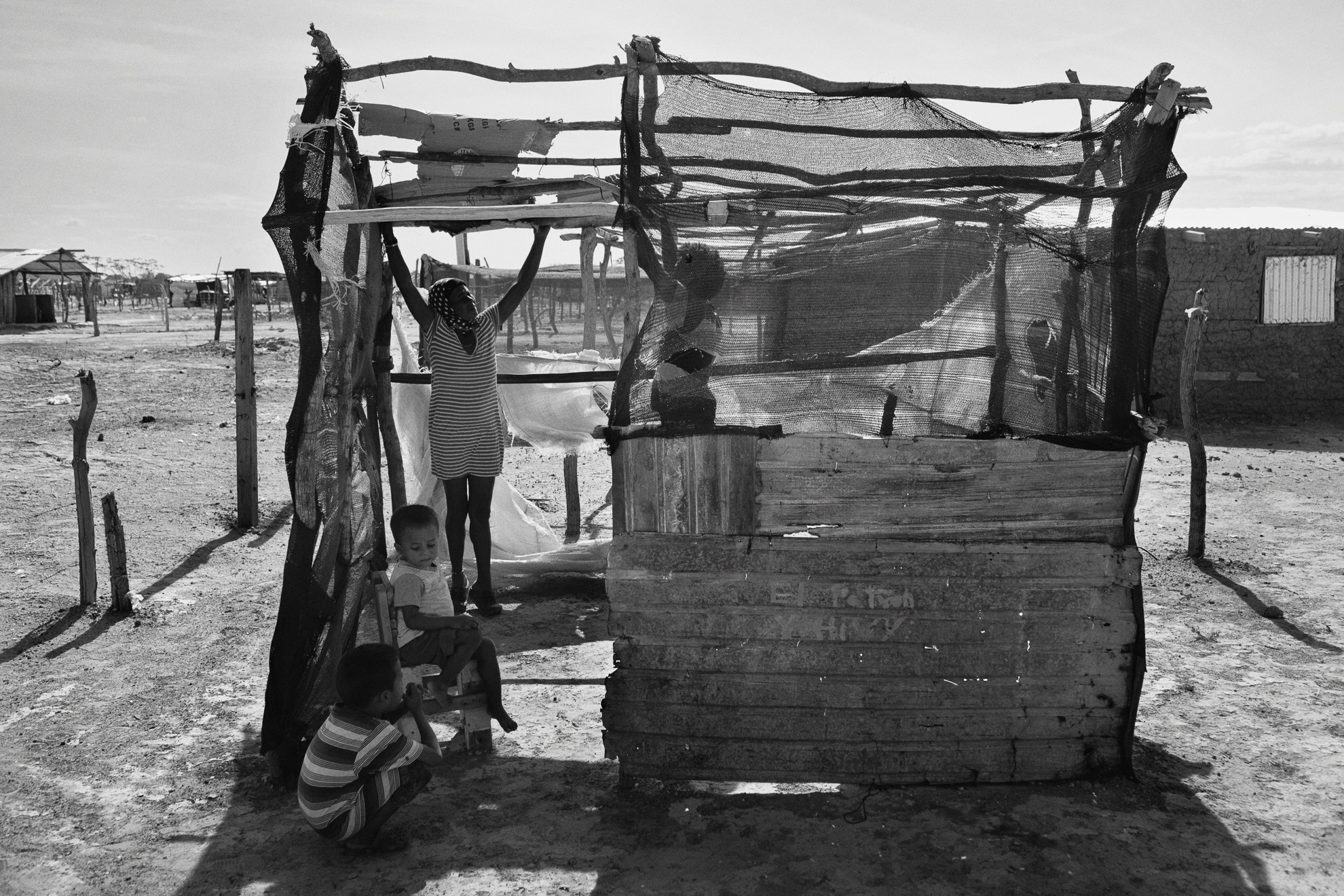 7. A woman is building a shack in the desert of La Guajira. Around 10 thousand migrants have been living for the past 2 years in a tent city on the outskirts of Uribia, an indigenous town. Without access to running water and sanitation, people are more exposed to diseases. 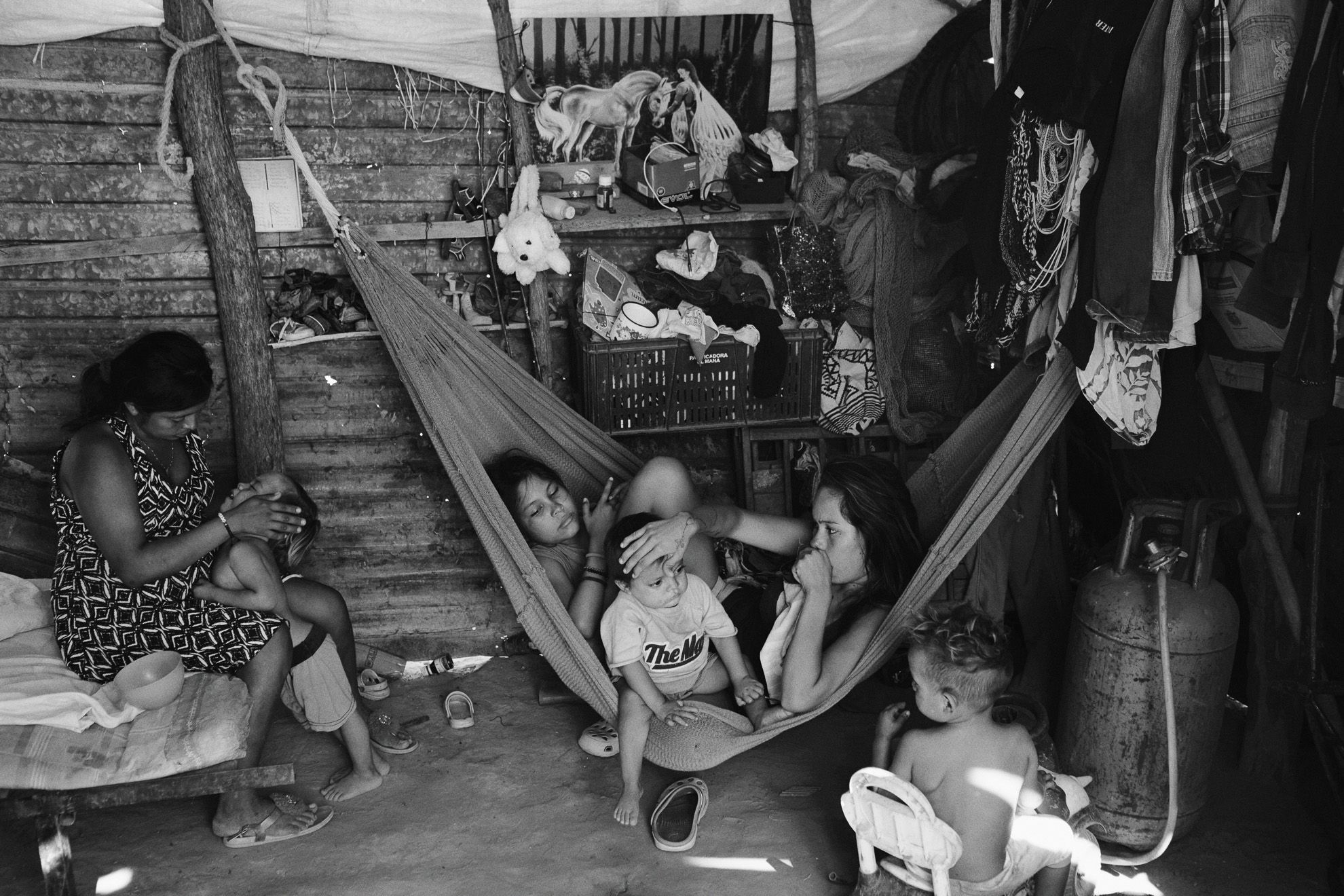 8. A family found a temporary shelter in an informal settlement for migrants in Uribia, Colombia. There, people have no access to running water and sanitation, and they are more exposed to diseases. 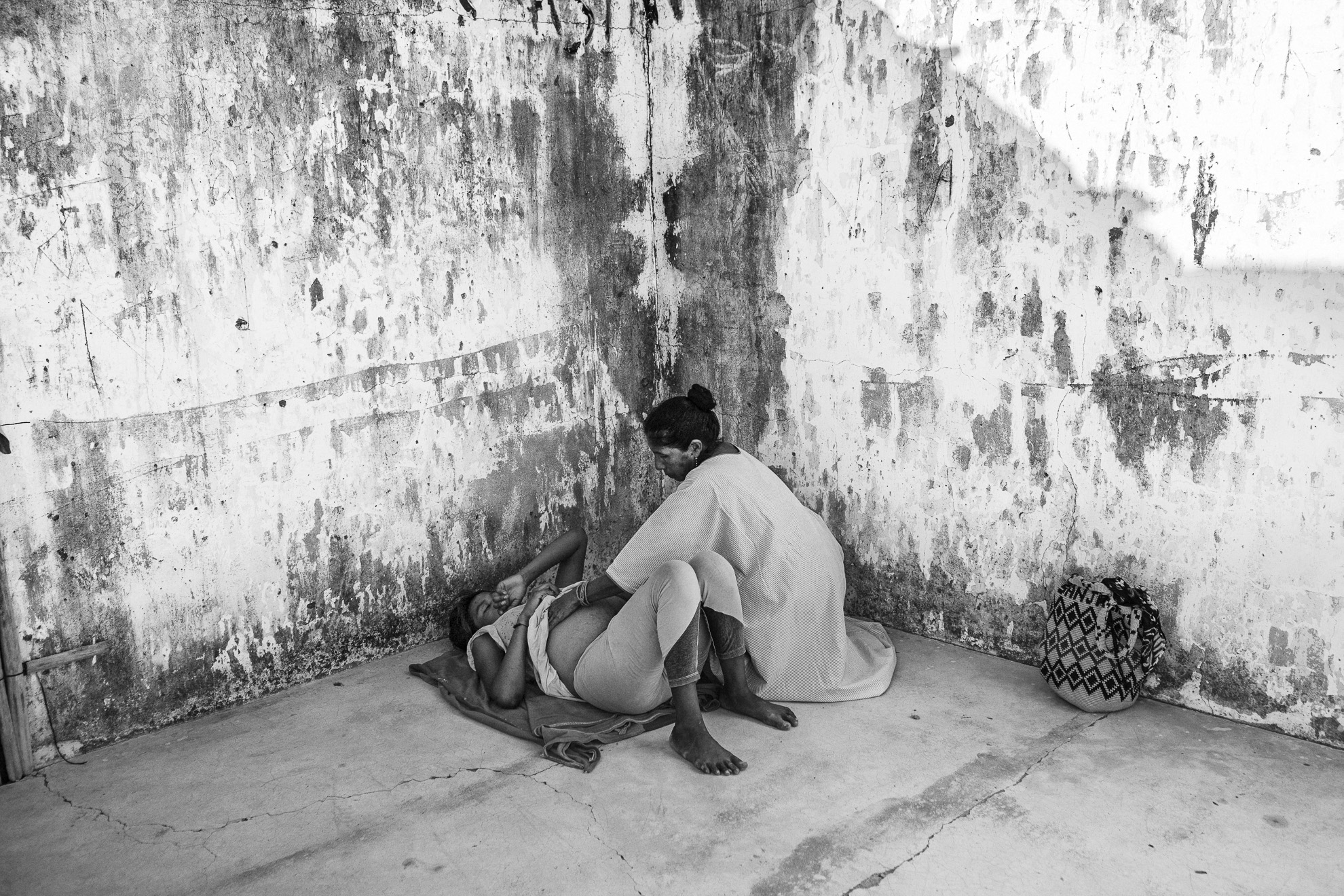 9. Frankilina Epiayu, a Wayuu indigenous midwife, kneads the belly of a pregnant Venezuelan girl in an informal settlement in Uribia, La Guajira, Colombia. Making up for the government's and the international agencies' incomplete response, midwives like Frankilina are responding to emergencies and help women to give birth safely, in Colombia. 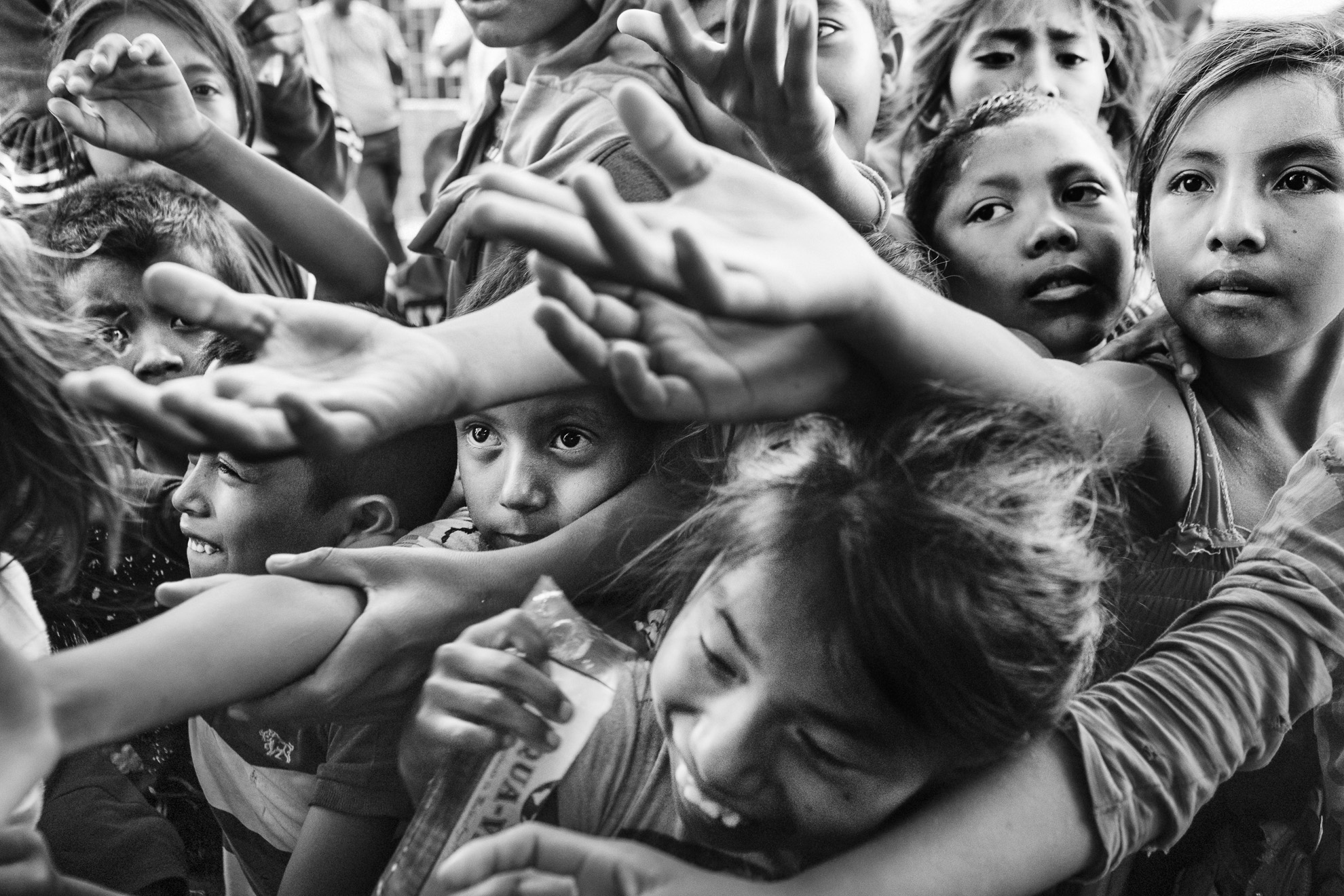 10. Children crowd at the door of a UNHCR attention center to receive donated water at the border town of Paraguachón, Colombia. Charity organizations and NGOs help supply people with medical attention, water, and food. However, the magnitude of the migration is bigger than the international agencies' capability to respond to it. Many end up in informal settlements or living on the streets.

A political and socio-economic crisis in Venezuela led to an outflow of migrants from the country, since 2016. The Venezuelans that I’ve met say they were compelled to leave because of insecurity, violence, lack of access to food and medicine, after losing their income.

Colombia is the country most impacted by this exodus. According to the United Nations Refugee Agency (UNHCR), 1.7 million Venezuelans are in Colombia, and three hundred thousand are children, a number underestimated since not everyone is registered.

For two years, I have spent weeks and months at the time in some of the border areas, traveling along the migration routes with those migrants who call themselves “the walkers”, and who have no money to reach a major city or the next border by bus. Following the most vulnerable migrants, children, adolescents, pregnant, and nursing mothers, I have witnessed the Venezuelan collapse.

The World Food Program now warns the pandemic could provoke famines, hitting countries already suffering from poverty and hunger, like Venezuela and Colombia. The economic impact of the outbreak has left people in urgent need, pushing them deeper into poverty, the main driver of exploitation, and vulnerability.

In La Guajira’s border, in the north of the country, dozens of thousands of migrants live in informal settlements on the outskirts of the indigenous cities. They have no access to running water or sanitation. Without nearby hospitals, adequate testing, and the possibility of individual isolation, they are now more exposed to contagion.

There, I have followed the Colombian indigenous midwife Frankilina Epiayu while she has assisted pregnant women. With her help, a new generation is born at the end of two collapsing worlds. Through her example of sisterhood and solidarity, the boundaries between two unsettled communities, local indigenous Wayuu and Venezuelan migrants, have blurred and connected.

Nicoló Filippo Rosso (b. 1985) is an Italian photographer living in Colombia. After the degree in Literature at the Universitá Degli Studi di Torino, in Italy, he traveled to Latin America, and he became interested in photography while living with an indigenous community in the Putumayo region. His work is committed to long-term projects, and he works on editorial assignments for clients such as Bloomberg News, The Washington Post, BusinessWeek, Le Point, Der Spiegel, Courrier International, and others.

Since 2016, Nicoló has been documenting the impact of the exploitation of coal on the land and the people of Colombia’s La Guajira peninsula. This work has been exhibited worldwide, and it has appeared in numerous magazines and newspapers’ publications. Currently, he is mostly dedicated to documenting the migration of Venezuelans who cross the border with Colombia heading to other Latin-American countries.