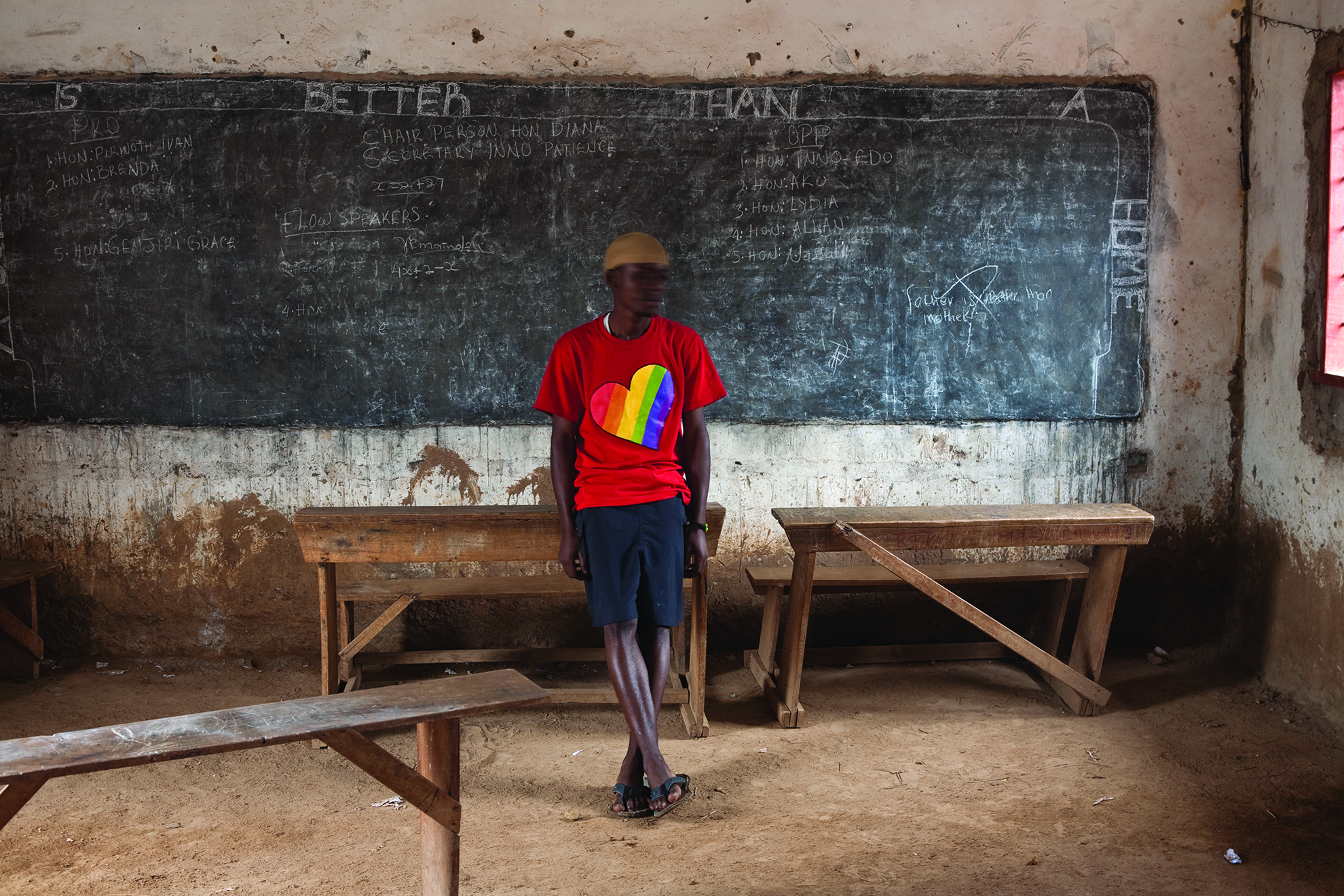 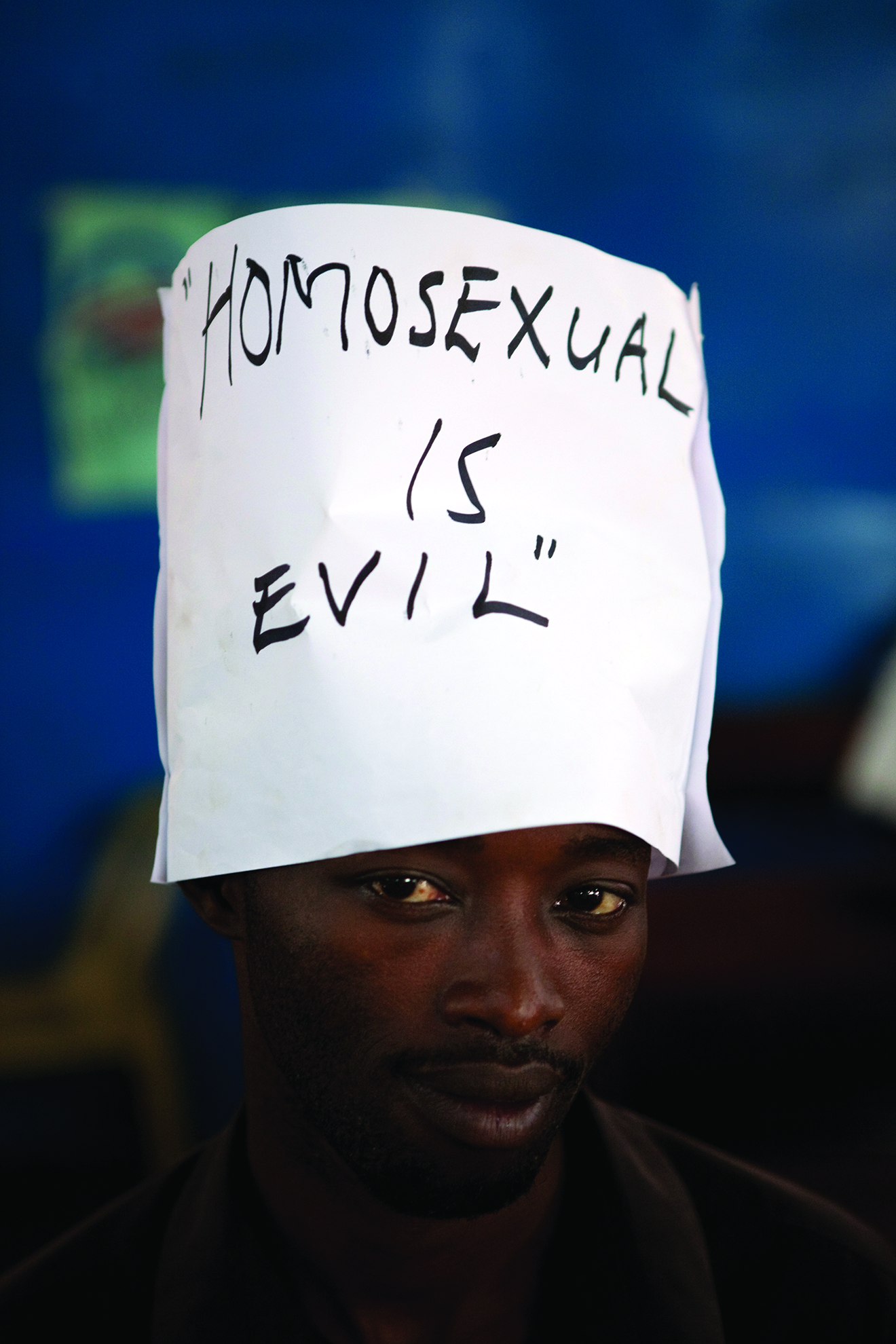 2. An Ugandan worshipper wears a banner with a homophobic message: "homosexual is evil" at an anti-gay rally held by religious and political leaders who are fighting homosexuality at Christianity Focus Centre in Kampala’s biggest slum, Kisenyi in Kampala, Uganda. February 17, 2010. 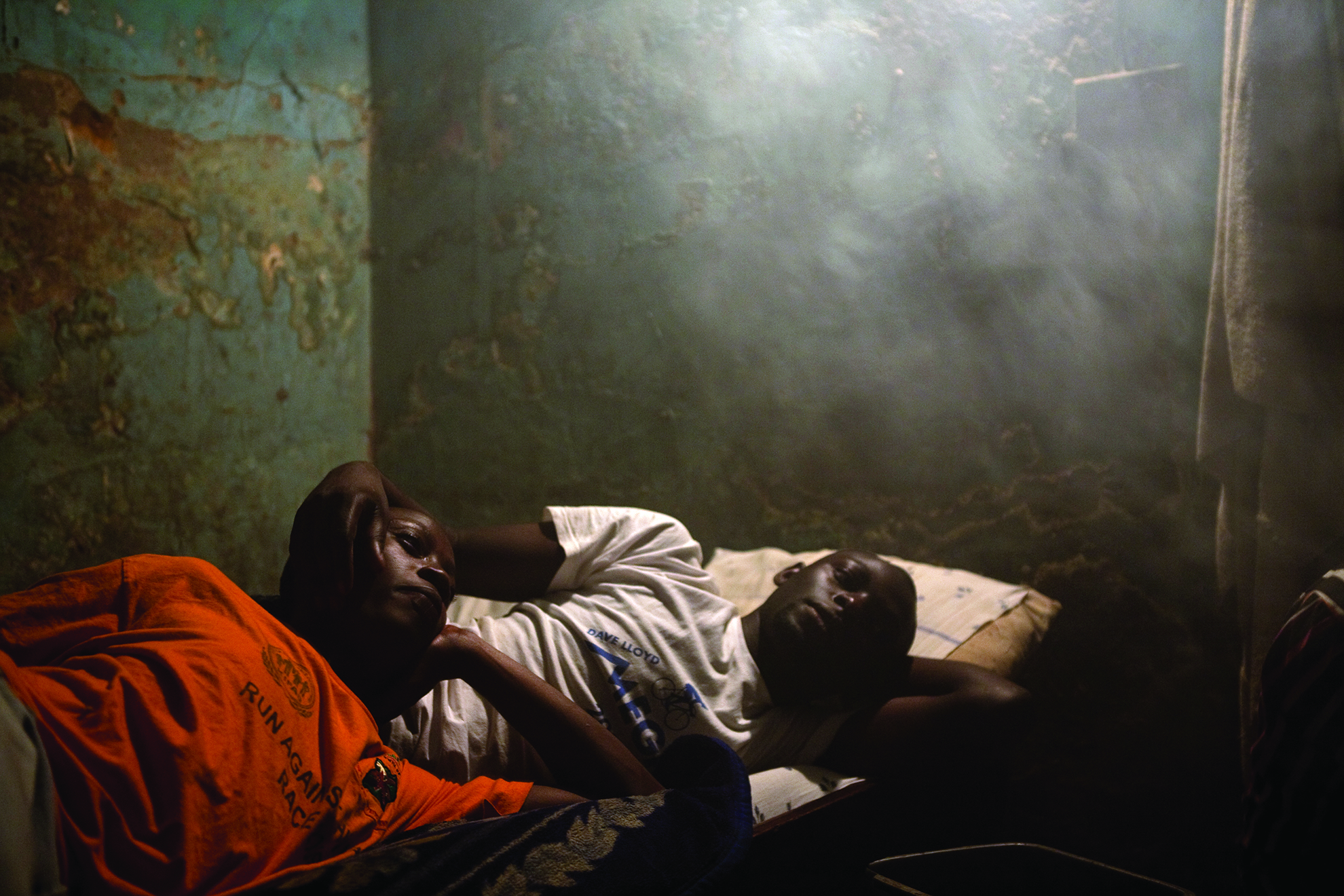 3. 4 march 2010 – Kampala, Uganda – Auf Usaam Mukwaya and a friend participate in a ceremony run by a gay witch-doctor to prevent the passing of an anti-homosexuality bill in the Uganda parliament.

In Uganda, homosexuality has been criminalized for over a century. But today, gays and lesbians are being threatened with one of the most punitive laws ever to be conceived. If passed by Uganda’s Parliament, it could lead to the execution of people who have gay sex more than once, the imprisonment of heterosexual people who fail to turn homosexuals over to the police, and the abolition of all organizations that support gay rights.

Although it has not passed yet, the law is like a sword of Damocles hanging over the gay community in Uganda. Each day no decisive action is taken to shut down the bill, homophobia is allowed to grow. Furthermore, the bill has allowed political and religious leaders to use the issue for personal gain, by scapegoating the gay community.

Auf Usaam Mukwaya is a 26-year-old out gay man in Uganda. He has been involved in gay rights activism in Uganda for years. As a result, he has been arrested and jailed twice, and has been harassed and threatened by his neighbours since he was outed in one of the local papers, which led to his face being shown on television.

Many of these images document Auf’s life, and his story of enduring prejudice, discrimination and loss shared by most of his gay friends. This draconian new law, if passed by Uganda’s Parliament, is tantamount to a death sentence for all of them.

I started this photo story to give a voice to LGBTQI Human Rights defenders. I wanted to show how they live their lives in the increasingly homophobic environment of Uganda, and how they have chosen to fight against this bill, where many have opted to look away. Their struggle is not only about fear and violence; it is also about the joy and solidarity of a movement in its formation.

If the bill is passed, persecution against the LGBTQI community will increase, but over the last year the gay community has also strengthened its resolve to continue its fight for equality. I hope these images succeed in demonstrating this hope.

It is also important to say that this story is not only about Uganda, indeed it illuminates a common struggle amongst the LGBTQI community throughout Africa.

Bénédicte Desrus (France) is an award-winning documentary photographer based in Mexico and working worldwide. She is represented by Sipa Press USA and has worked throughout Europe, East Africa, the United States, and Latin America.

She focuses on humanitarian and social issues around the world. Her photography explores the lives of people ostracized by society, and the communities they form to survive and find respect. She often spends months with her subjects. Recent stories explored the lives of elderly sex workers living in a shelter in Mexico City, Prader-Willy syndrome in Mexico, Donovan Tavera - Mexico's only government-certified forensic cleaner, the anti-gay bill & persecution of homosexuality in Uganda, the albinos killing in Tanzania, and global obesity.

She co-authored the book: "Las amorosas más bravas" ("Tough Love"). The seven-year-long project documents the lives of the women living in the Casa Xochiquetzal, a shelter for elderly sex workers in Mexico City.