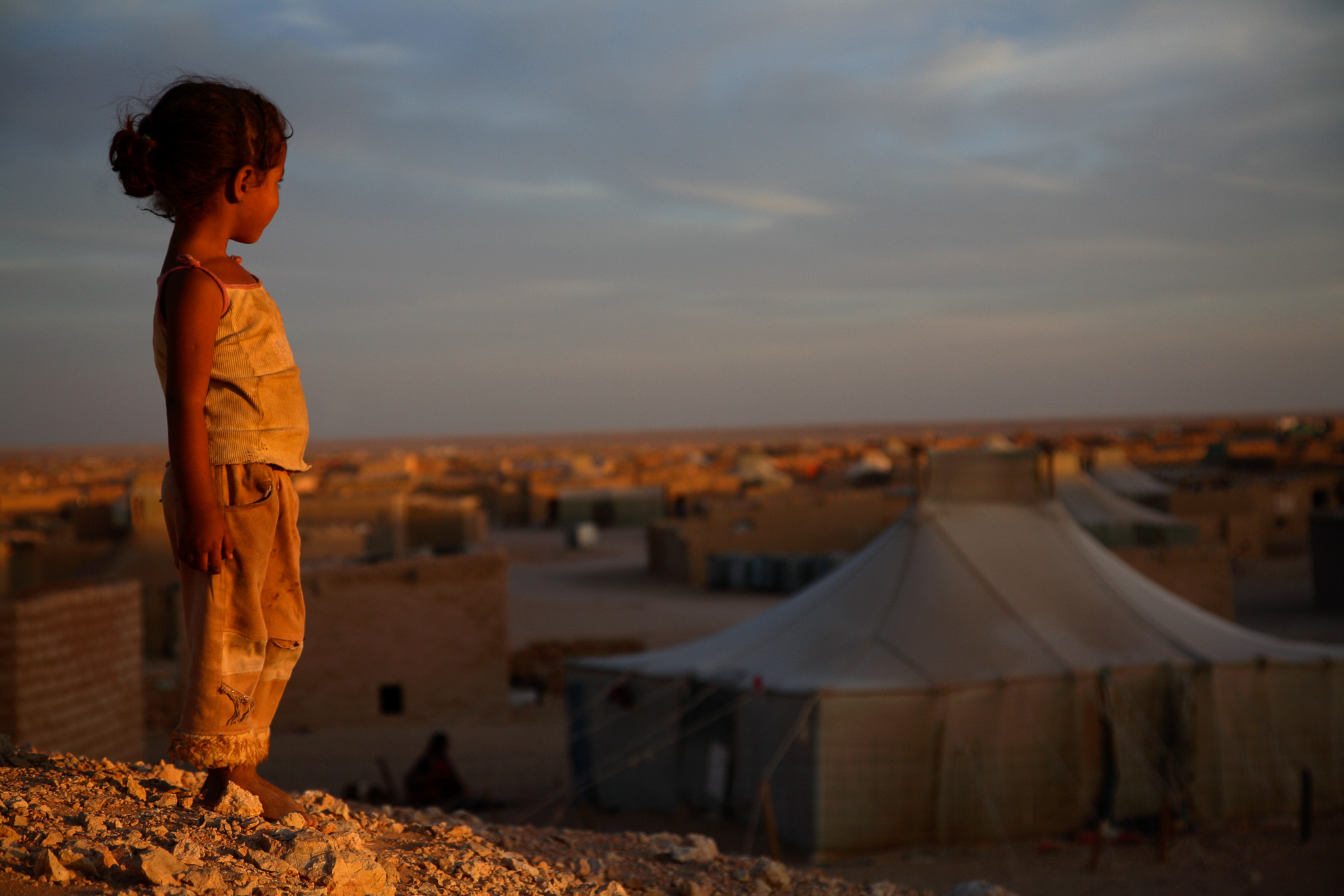 1. Glana, a four-year-old girl, watches the last rays of sunlight in the Smara refugee camp. In the background, is her family's tent.

2. Children playing football in the scorching sun in the Sahrawi refugee camp in Smara. Football is their main pastime.

Children of the clouds

In 1975, with Franco on his deathbed, Moroccan and Mauritanian troops invaded Western Sahara – with Spain’s consent – to partition the then Spanish colony. From their departure from Western Sahara in 1975, two generations of Saharawis have been born and live a destitute existence in the inhospitable destitute existence in the bleak and bleached refugee camps of Tindouf, Algeria. There Sahrawis remain in a state of perpetual temporariness.

Approximately 150,000 Sahrawis live in refugee camps near the border town of Tindouf. These camps are located in the “devil’s garden”, a sirocco-swept section of the Algerian hamada, where temperatures can rise to 55 degrees Celsius. Although they have been able to organise themselves in the camps and gain limited access to education and health care, the Sahrawi people are dependent on international aid, which is becoming less secure each year. Reports from the UN High Commissioner for Refugees warn that funding is at an all-time low.

Between May and June 2007 I spent a month in the Smara and Dakhla refugee camps, documenting the lives of the Sahrawis. I paid particular attention to the children growing up in the worst conditions. According to the World Food Programme, 44 per cent of children under five suffer from anaemia, under five suffer from anaemia, as do half of their mothers. About 35 per cent of children suffer from chronic malnutrition and another 10 per cent from acute malnutrition, which explains the obvious signs of stunted growth.

To my surprise and considering the conditions in which they live, Sahrawi children are incredibly affectionate and playful, just like any other children in the world. This is their story. The children of the clouds.

He is a freelance photographer based in Spain. Available for assignments worldwide, from Madrid (my hometown) he has very easy access to all of Spain, Portugal, Southern Europe, and the Mediterranean. He is particularly interested in editorial and documentary photography, travel photography, and photography with a humanitarian focus.

Clients include The New York Times, The Wall Street Journal, The Guardian weekend magazine, Le Monde weekend magazine, The Washington Post, El Pais, Courrier International, the BBC, Libération, and Asian Geographic, among many others. He has also worked on assignments for organizations such as The Olympic Games (London 2012) and numerous international NGOs such as Médecins Sans Frontières, CARE, Heifer, and World Animal Protection. He has exhibited his work in Europe and the US, including a solo exhibition about the Sahrawi people at the US Congress in Washington DC.

He graduated from Georgetown University (International Relations and Development), and the Washington School of Photography. He is fluent in English, Spanish, French, Portuguese, and Italian.

When not on assignment he is working on a long-term personal project on rugby, his passion (or one of them).

He subscribes to Henri Cartier-Bresson's definition of photography: "To take photographs is to align the head, eye, and heart."