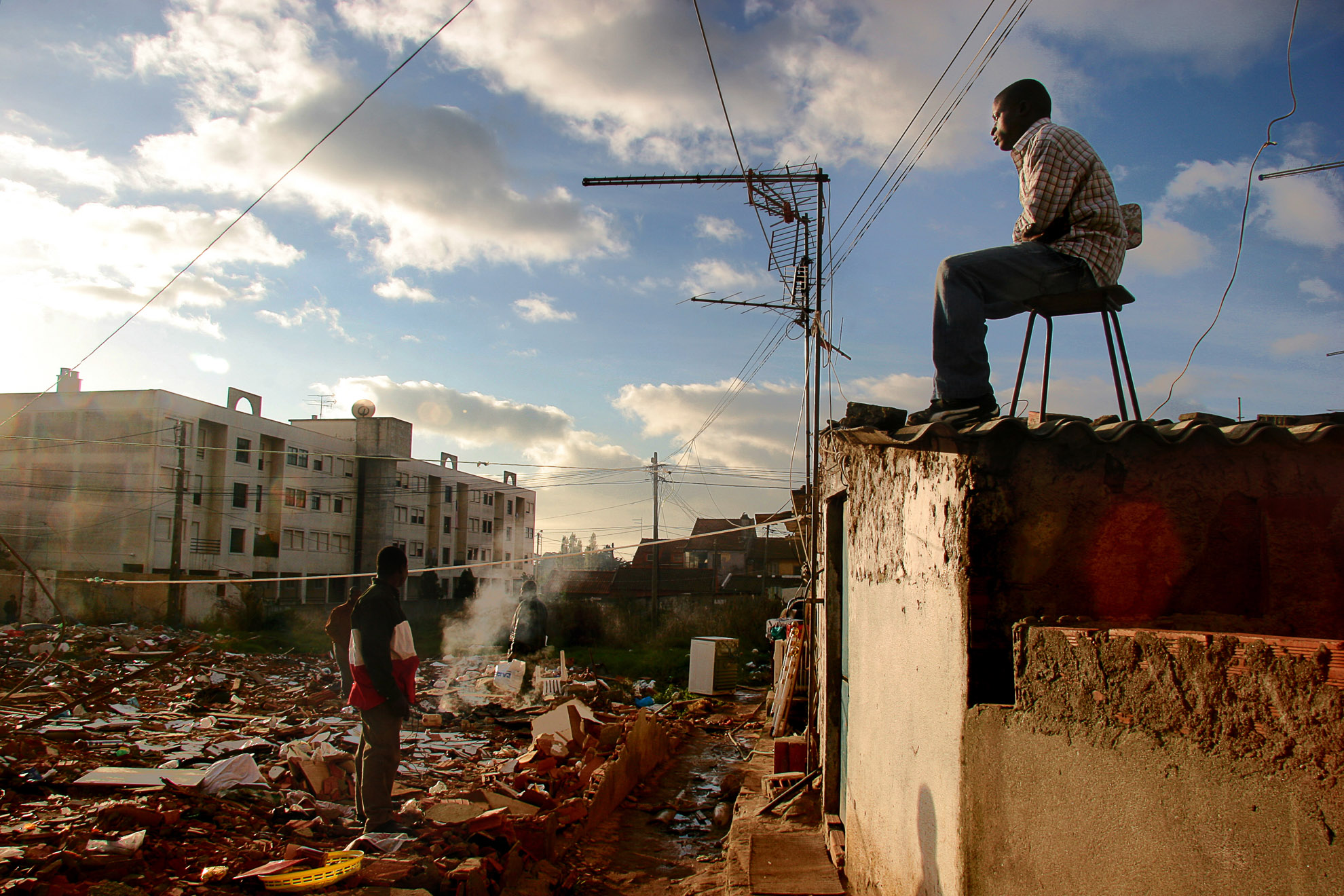 1. The delay in demolition allowed other families to occupy, sometimes even buy, the shacks that were being left vacant. The situation worsened over the years. Today, in the suburban shanty towns of Lisbon, live the so-called second generation immigrants, who are being evicted. They will never benefit from the PER. Like this man, who, by sitting on the roof of his house, hopes to prevent it from being demolished. Could it be that the Portuguese shanty towns are a test case of what is to come for European immigration?

In 1975, a year after the Carnation Revolution, Portugal granted independence to its African and Asian colonies, whose inhabitants had the right to choose between keeping Portuguese nationality or becoming citizens of their new country. A migratory wave arrived in Portugal; citizens of scarce economic resources decided to settle in the old metropolis. Illegal settlements called bairros de barracas, or shantytowns, appeared and grew until 1993, when the PER (Special Relocation Program) conducted a census and relocated families in officially subsidized houses, to finally destroy the illegal dwellings.

ENRIC VIVES-RUBIO (Barcelona, 1981) is a photojournalist living in Lisbon since 2004. He studied photography at IEFC (Institut d'Estudis Fotogràfics de Catalunya) and did a post-graduation in Photojournalism at UAB (Universitat Autònoma de Barcelona). In 2004 he moved to Lisbon where he interned at O Independente and Público. He worked at Correio da Manhã and in 2005 he started his professional stage at Público newspaper where he was a photojournalist for 11 years until 2017.

She is currently a freelance photojournalist, and photographs for TAP UP Magazine, for the Primeira Vez project, for the Orchestra without Borders, among others.

Throughout her career, her work has been recognized by various awards. Among them, it should be highlighted that she was a finalist for the Luís Valtueña International Humanitarian Photography Award, in 2006, with a work about the shantytowns of Lisbon; she obtained an honorable mention in the Visão Award, in 2008, with a portrait of the Dalai Lama; she won first prize in the news category of Estação Imagem with a work about the floods in Madeira, in 2011; and she won the most important prize in journalism in Portugal, the Gazeta Photography Award 2017, with a photograph of the 400 cars set on fire at the Andanças Festival.