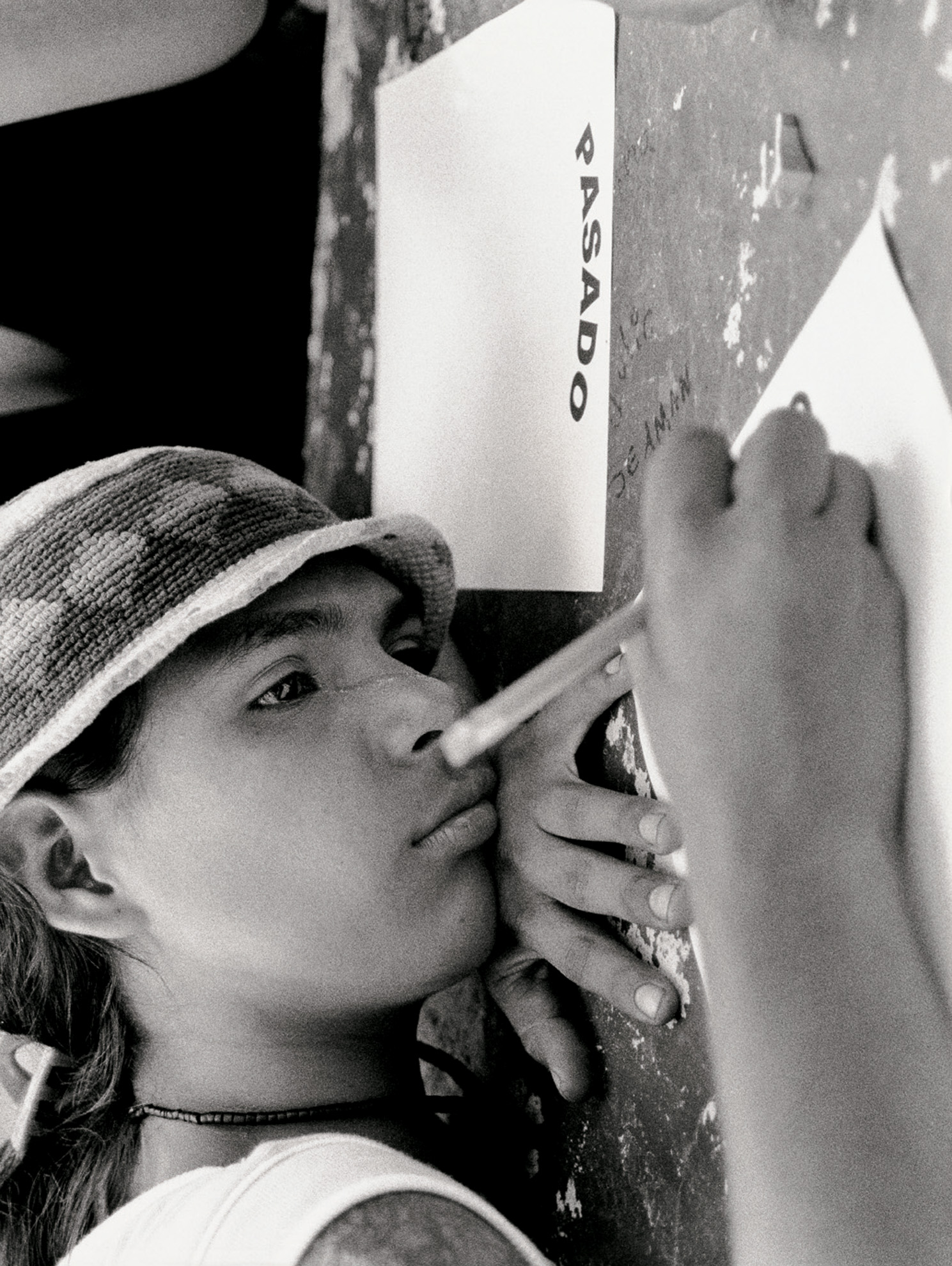 1. The protagonist of the photo is Raquel, a 19-year-old girl, prostituted by her own family. Raquel has two children that she cannot live with, due to her addiction to crack cocaine and her precarious economic situation. crack addiction and economic precariousness. 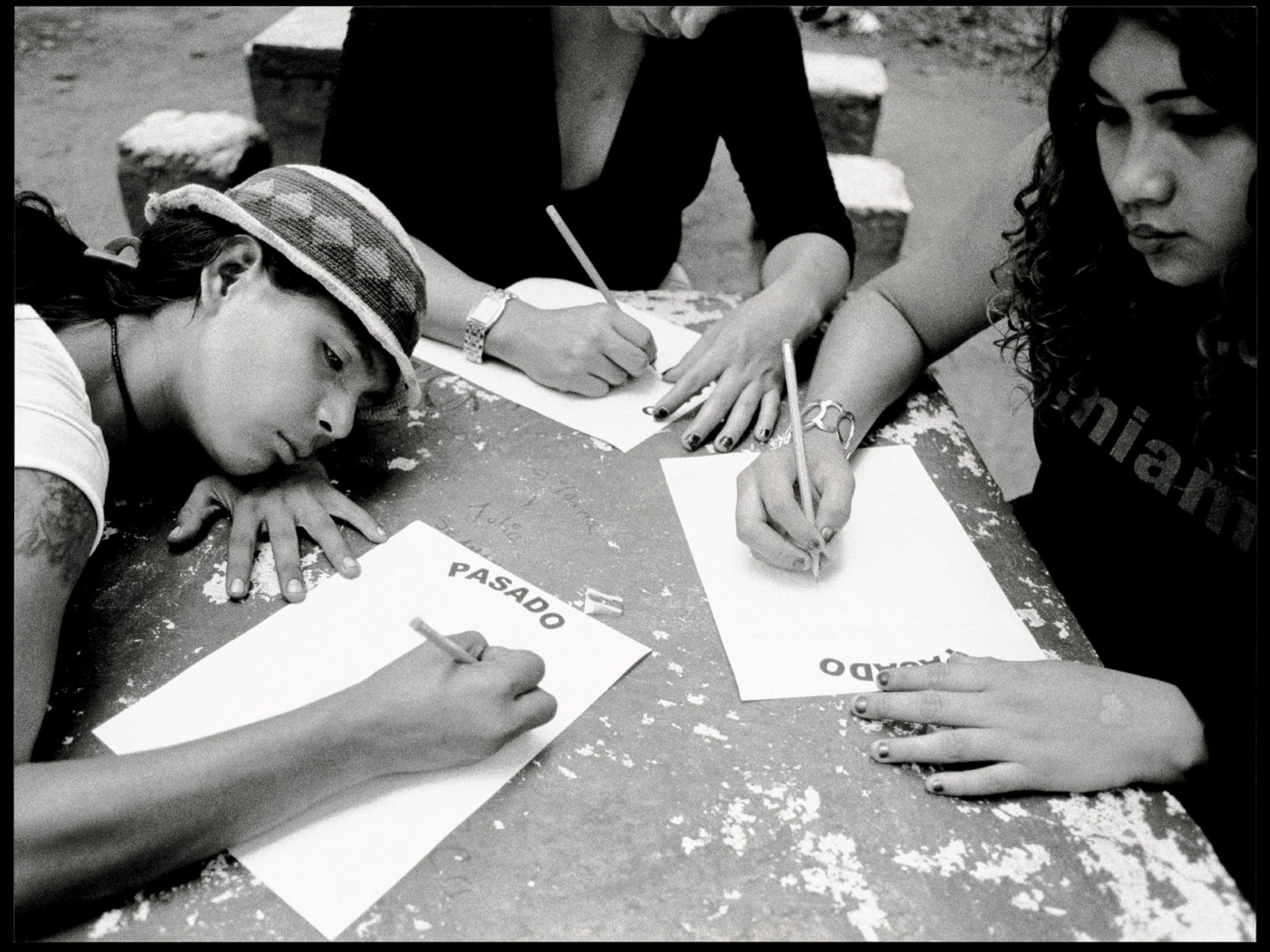 2. Raquel, Jessica and Kamila (from left to right) write about their past. The photograph shows the expression of these girls as they face their memories, all that they have had to endure. These were moments of dense, sad silence, but they also served to empty their pain onto these sheets of paper entitled "Past". Kamila's blank stare as she looked back over her life is evidence of her pain. Kamila was a five-year-old boy when he was raped and only a teenager when he started prostituting himself by adopting a new female identity. He has had to fight against the prejudices of a society that does not accept gays, let alone transvestites. Poverty also led her to crime and violence. Under her clothes are hidden three bullet wounds, which almost ended her life. Today, he prostitutes herself in the same place where Jessica does.

Balboa Park in San Salvador (El Salvador), September 2005, workshop organised by Médecins du Monde for different groups. In this case, they are people living with the AIDS virus. The workshop, led by two psychologists, included activities aimed at psychologically strengthening the beneficiaries and helping them to reintegrate socially.

The girls participating in the workshop were or have been victims of commercial sexual exploitation. All of them started to be sexually exploited when they were minors.

When I was barely four years old I was already walking around the house with a notebook and pen tucked into the pocket of my flannel dressing gown. I went from room to room taking notes on what I observed, what I found out. Of course, I couldn't write yet, but I would make up scribbles in the form of words. At the same time, in the late '70s, my aunts would take photos of my sister and me, which my mother would organize into albums. I was fascinated by those black and white images. I spent a lot of time being amazed that a photograph looked so much like the real world and yet so little like the real world.

I liked to understand people through the photos and their stories. I even interviewed my grandparents, writing down their answers when necessary. Later I studied Geography and then Reportage Photography to have more tools with which to interpret the realities of people outside my little world.

A picture is not worth a thousand words. The function of the image is to suggest words. The function of the word is to suggest images. Combining photography and words (narrative storytelling) has allowed me to find a complete means of expression. This is something I have been able to put into practice thanks to the Barcelona photojournalistic collective SomAtents, of which I have been a member since 2015. Without a doubt, working regularly with this collective, as well as developing my professional life as a photography teacher at the school of Art and Design EMAD, and teaching photography seminars at the Universitat Autònoma de Barcelona has given me a great learning experience.

I have done photo-reportage work on the following subjects: Zapatista movement in Chiapas (Mexico); child sexual exploitation in San Salvador (El Salvador); childhood and HIV in San Pedro Sula (Honduras); malnutrition in Jocotán (Guatemala), Eritrean and Ethiopian refugees in Rome (Italy); apartheid and colonization in the West Bank (Palestine); poverty and acculturation in the Navajo Indian reservation (USA), feminicide in Ciudad Juárez (Mexico), refugees and COVID in Lampedusa (Italy). In Barcelona, I have reported on the environment; substandard housing, drug dealing, and homelessness; sexual abuse and patriarchy; illiteracy. I have published my work in newspapers such as Directa. cat, Público.es, El Periódico.com, La Jornada, 20 minutes and above all in the magazine of the SomAtents collective. The work I did on SPECISM is the one that seems most important and necessary to me because it focuses on reviewing what is happening to the true innocents and the greatest victims of all history.