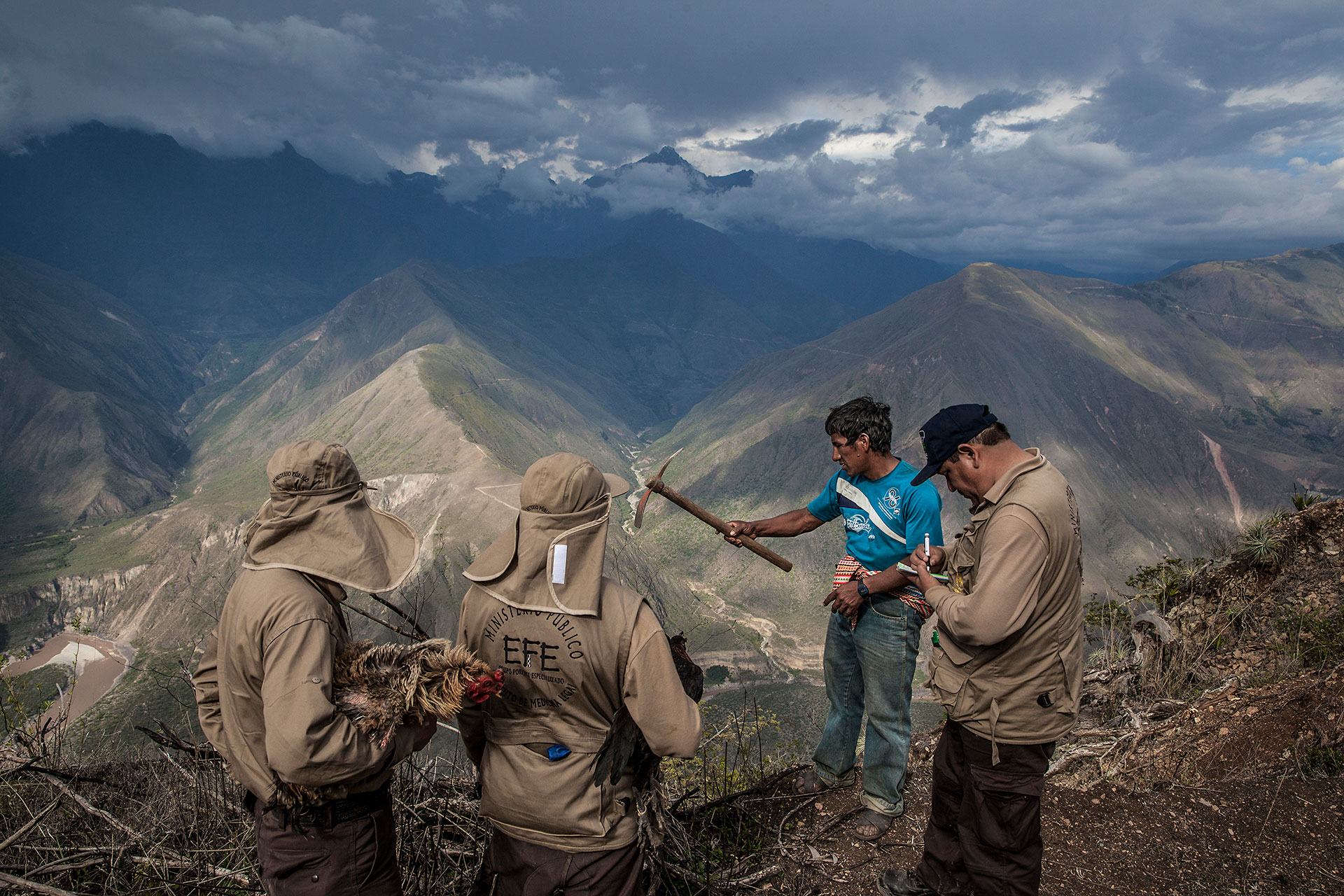 1. Félix Pacheco (36 years old), equipped with his pickaxe, points out to the Forensic Team of Specialists the location of the grave which he thinks contains the remains of his father, murdered 30 years before. Félix escaped with his mother from a military attack in the mountains where they had been hiding. 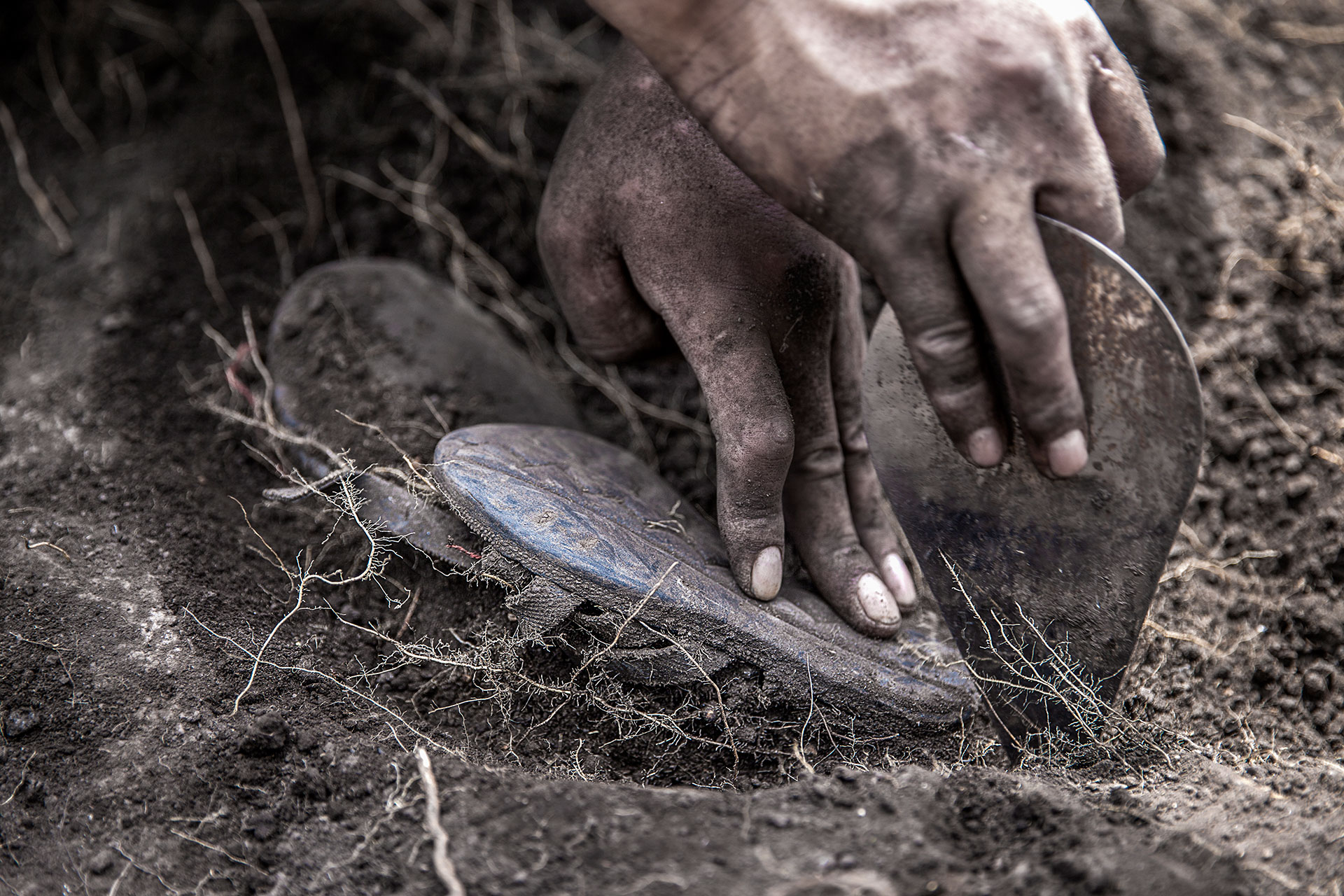 2. In the area known as Suyrurupampa, the exhumations begin and the first thing to be found is the body of a child. 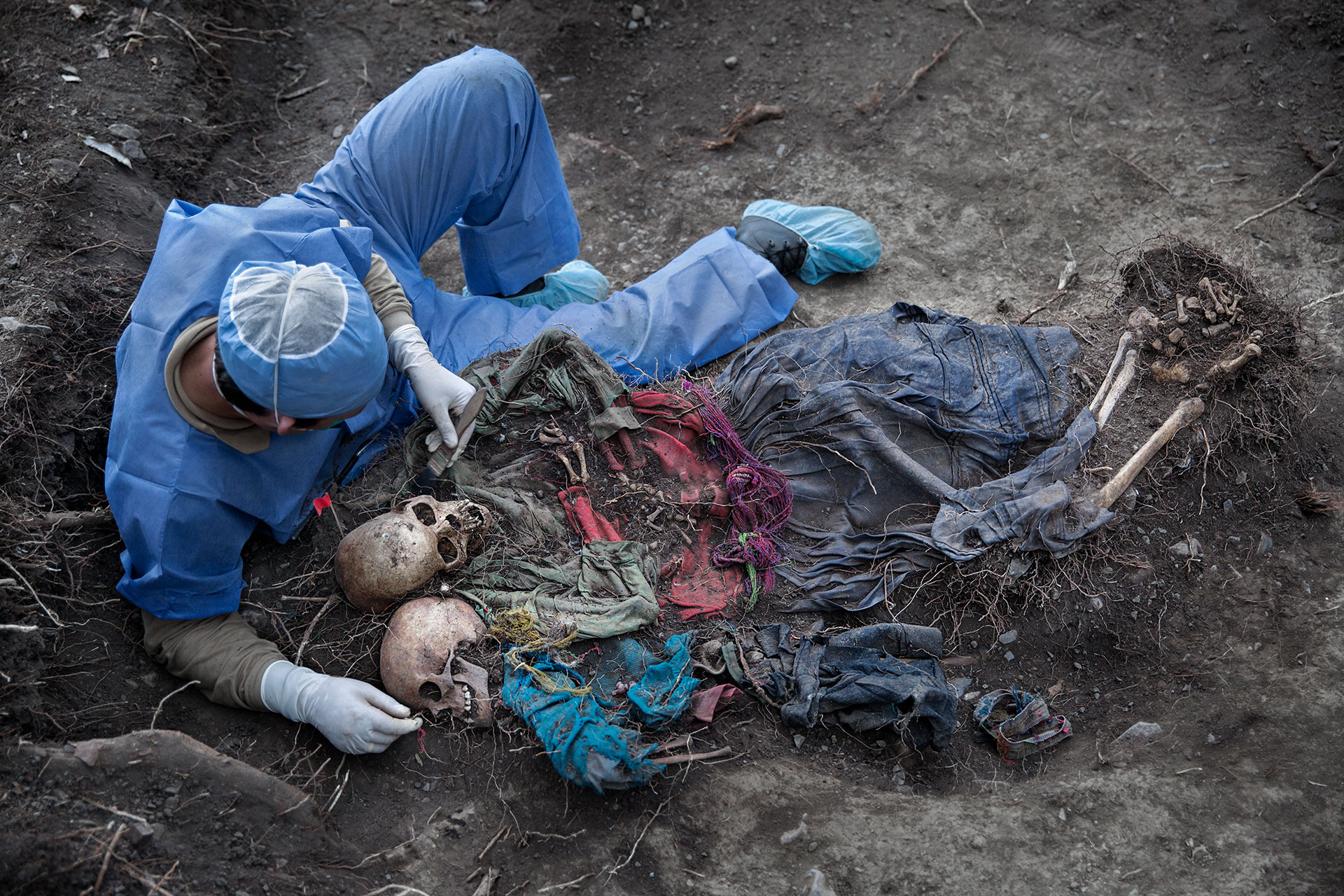 3. A group of forensic examiners works in what is known as Chaupimayo, an area of matted vegetation in the midst of a mountain 24 hours walking from the nearest road. The forensic archaeologist Dannal Aramburú has spent five hours outlining the crime scene with his knife, brush, and trowel. It is quite difficult to remove the earth from the bones of what appears to be a woman and her child. The trees have been feeding on them for 29 years. 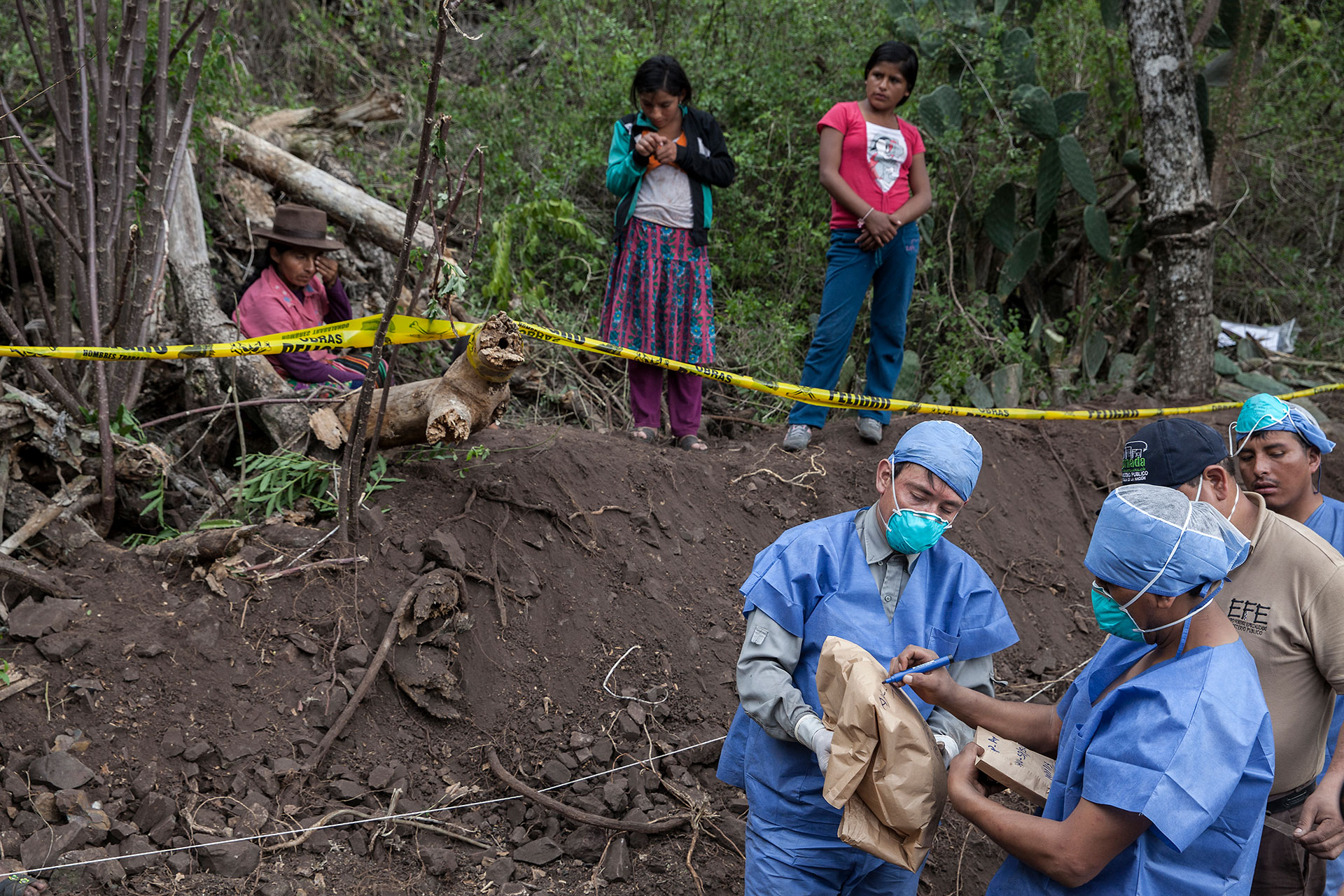 4. The forensic team label and pack the mortal remains while the families of the victims watch from behind the yellow line. 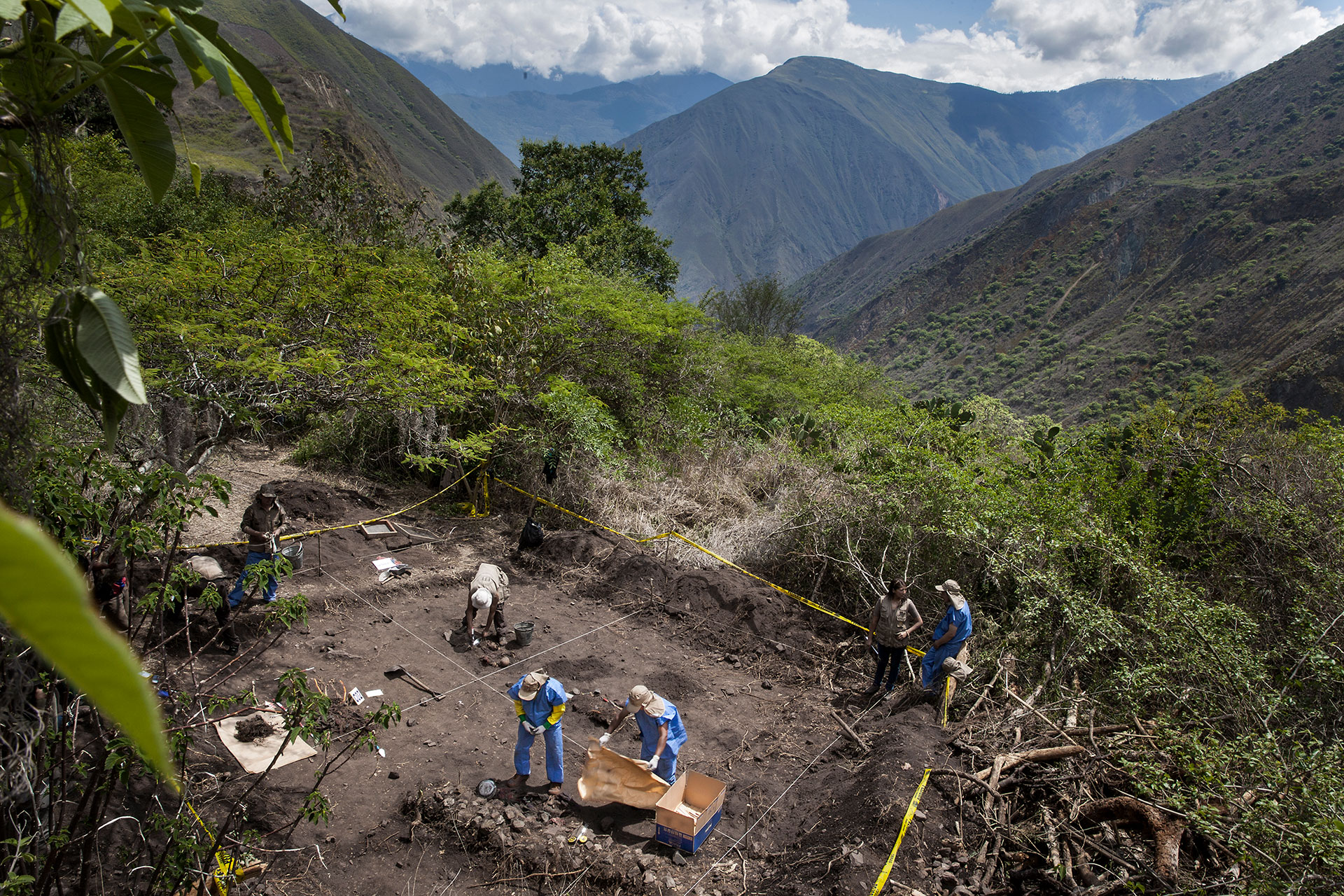 5. Four graves have been located in Suyrurupampa. What is to be found here is absolutely dreadful: thirteen minors between 2 and 16 years old and two women between 25 and 40. They were presumably shot and dismembered, according to what forensics can tell from the bone injuries caused by a rifle and Peruvian army shells found on the site. The killing occurred in 1986, say the survivors. 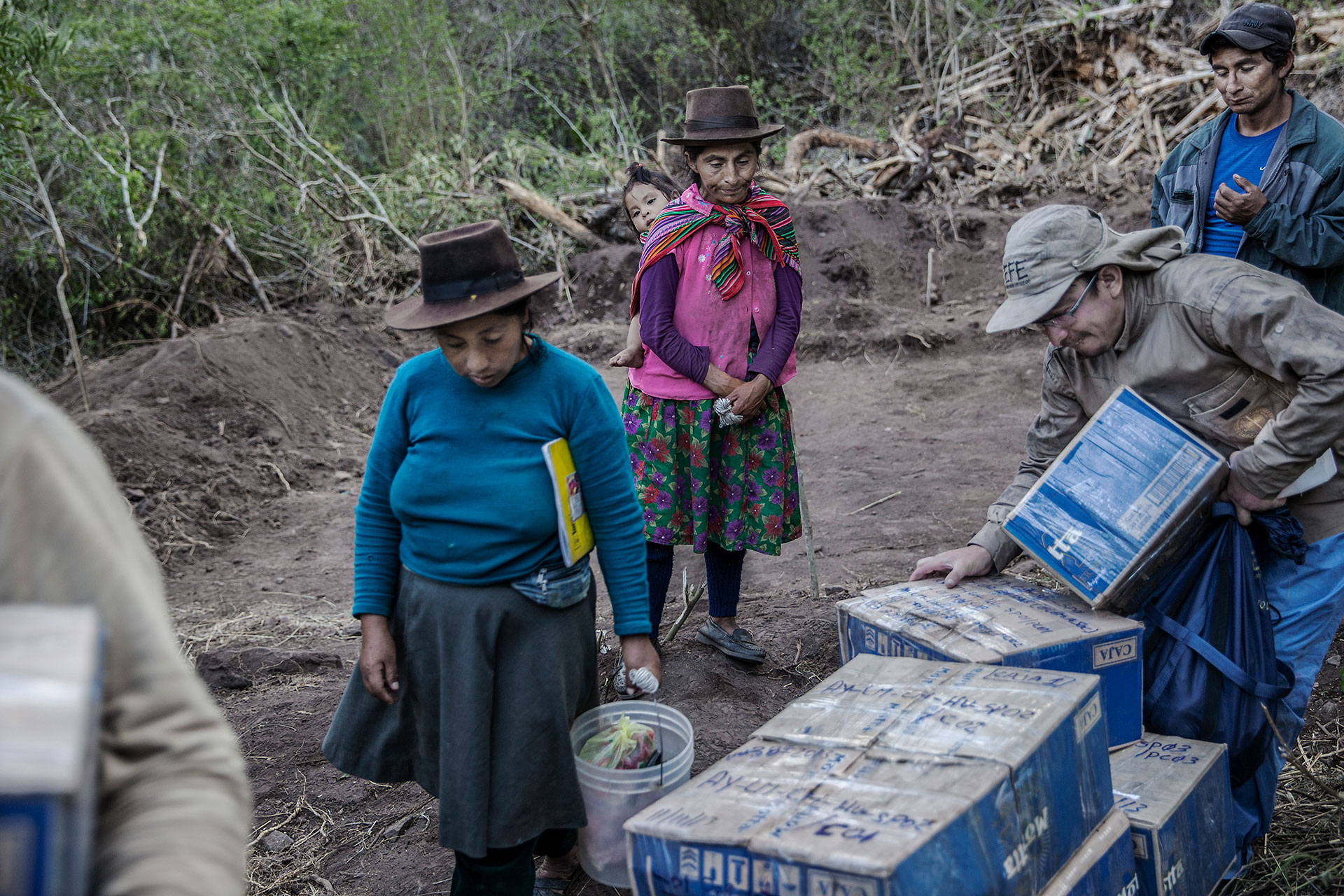 6. Valentín Casa (far right), his sister Teresa (center) and Valentín’s wife (left) in the place known as Suyrurupampa, where Valentín and Teresa’s mother was allegedly buried after being brutally murdered in 1986 in the east side of the Chungui district. No roads reach this point. The forensic specialists remove the bodies of 15 victims to be identified. 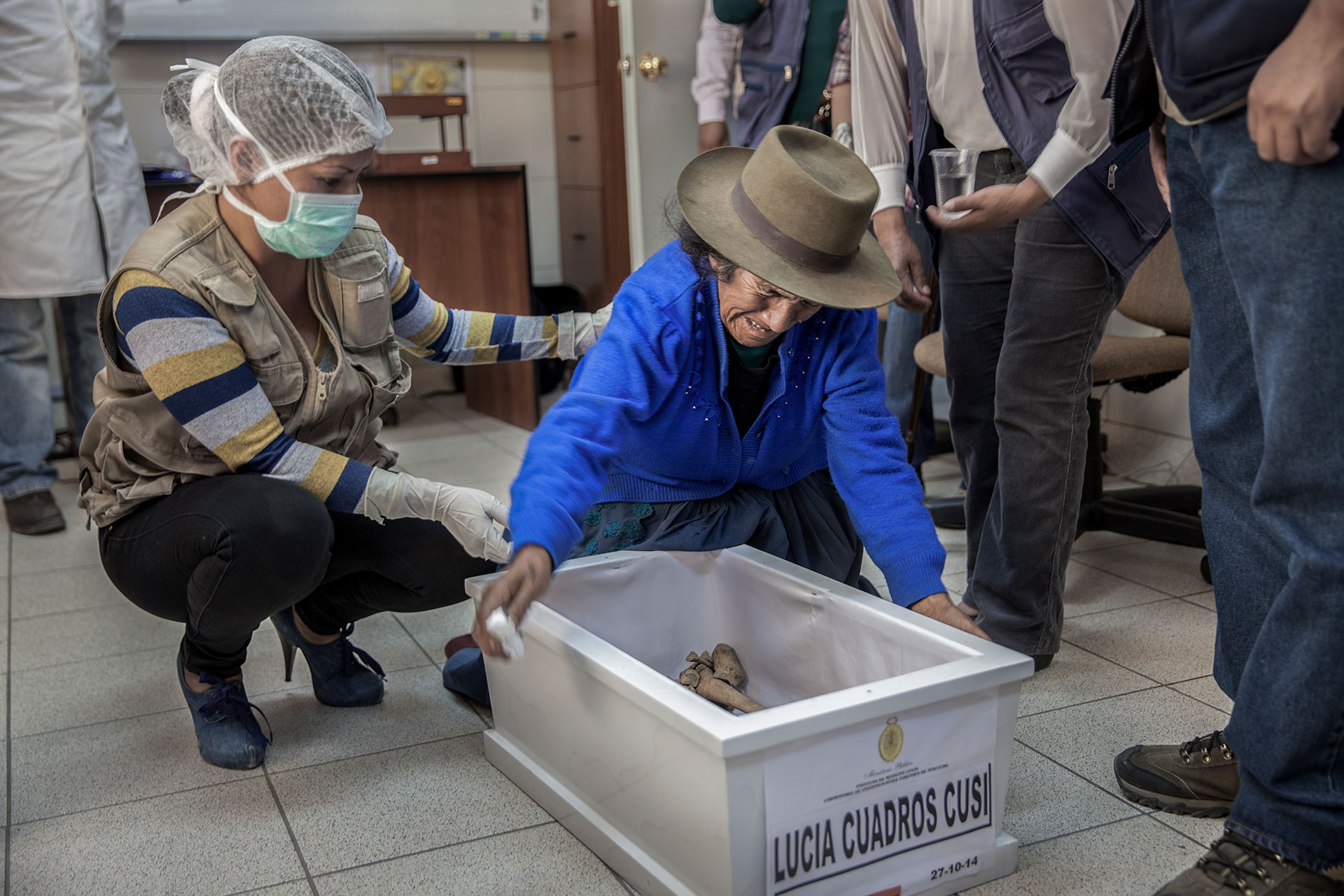 7. Angélica Cusi Díaz bursts into tears when she sees the remains of her daughter Lucía Cuadros (identified in the forensic lab) together with those of her granddaughter, both murdered by terrorists. Lucía was only 14 years old when she was kidnapped and subsequently killed in 1984. 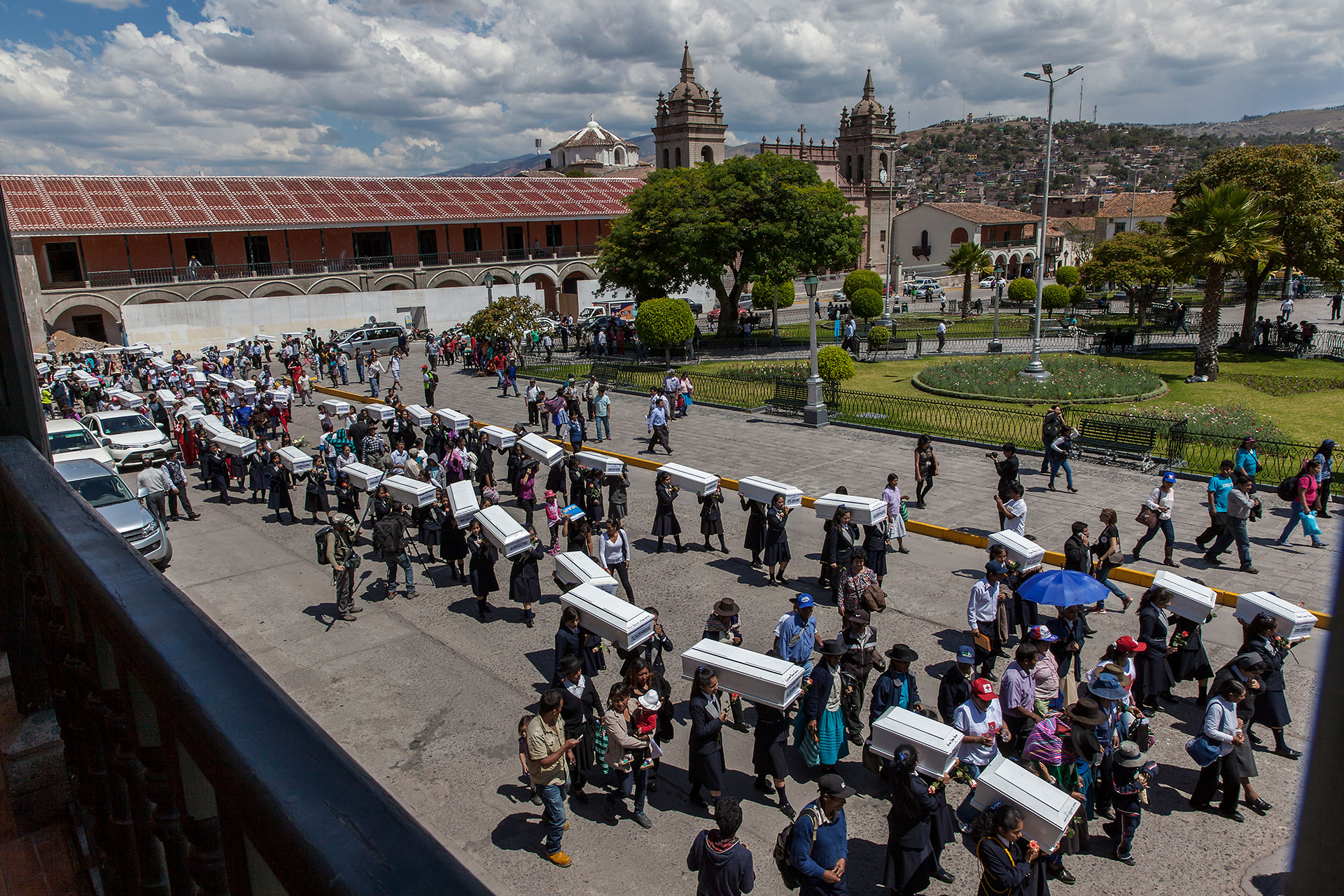 8. In October 2014 the bones of 65 people were found. Most of them belonged to farmers murdered in the Ayacucho region in the 80’s and 90’s. The remains were delivered by Public Ministry officials to their surviving relatives. There was a procession of coffins in the town of Huamanga (Ayacucho) 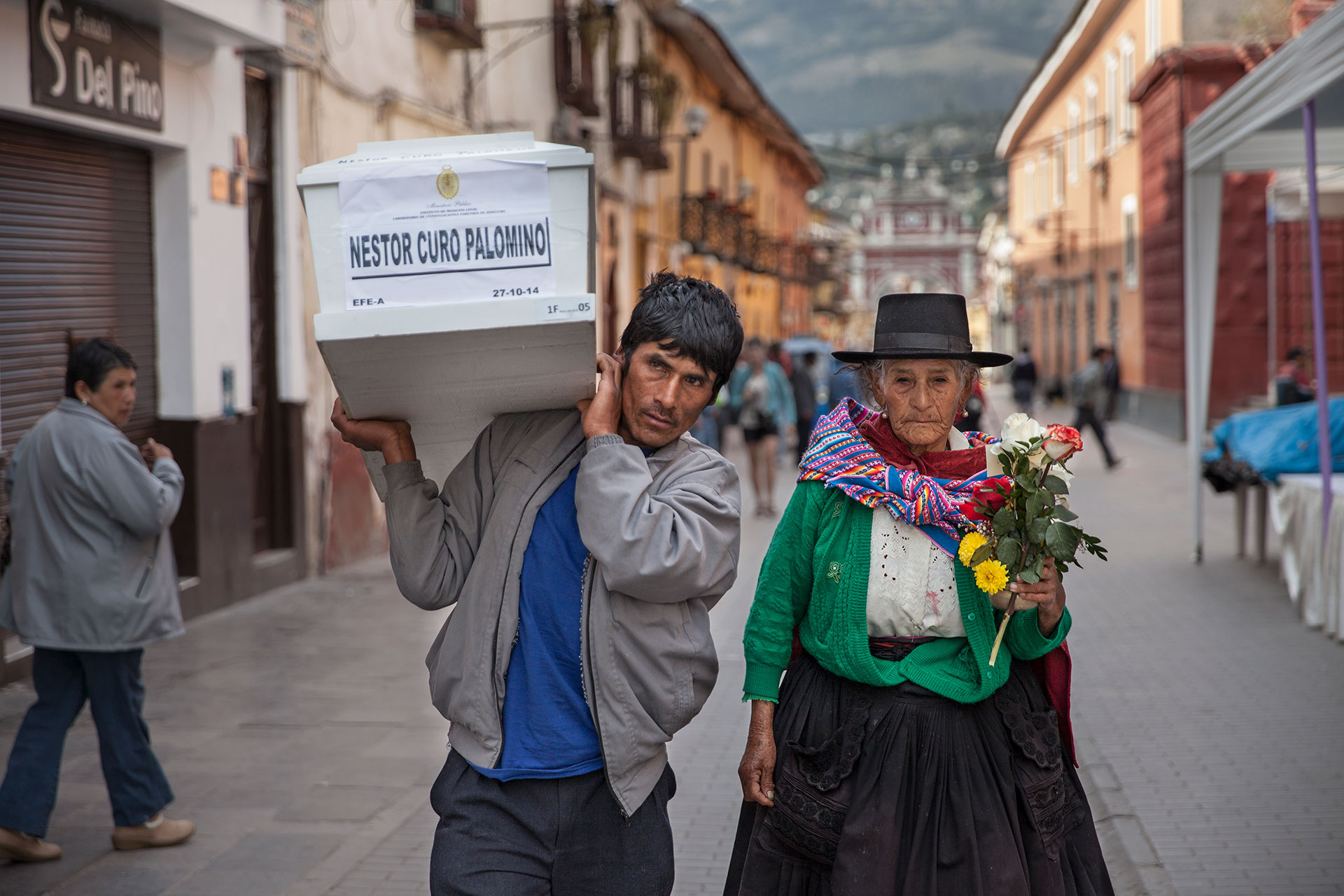 9. Eusebia Palomino walks through the town of Huamanga escorting the coffin which contains the mortal remains of her son, Néstor Curo Palomino, murdered in 1990 by Shining Path when he was defending his village from a terrorist attack. She is taking him to Huallhua, a village which is 12 hours away by horse cart. 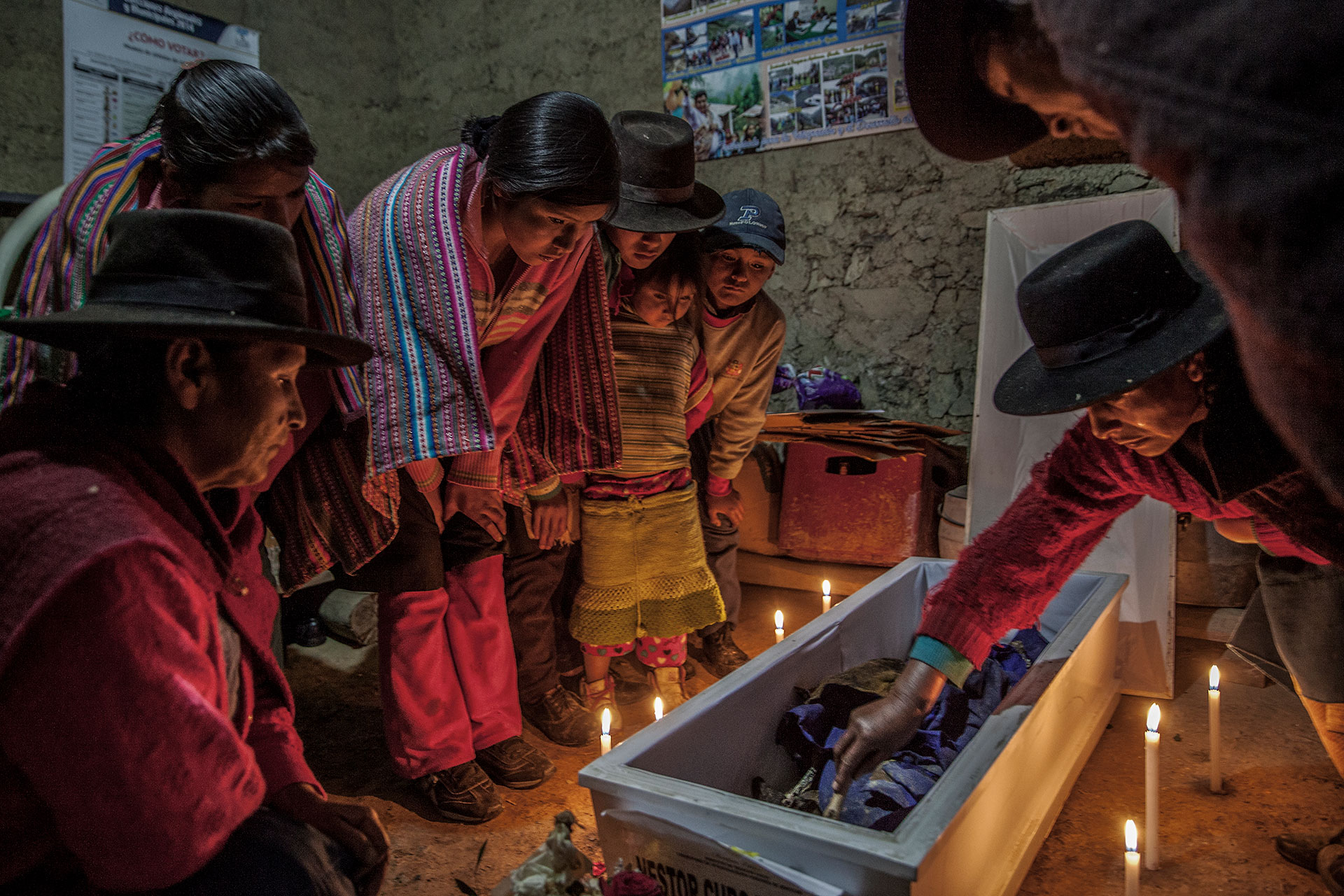 10. A vigil is held for Néstor Curo in his old house in the village of Huallhua. His siblings as well as nephews and nieces are in attendance.

The Pain of Returning

Between the years 1980 and 2000, Peru underwent a period of “political violence” which resulted in 70,000 people that were murdered or went missing, owing to the confrontation between the terrorist group Shining Path and the Peruvian army. Innocent victims such as minors, women and local authorities, mainly from the Andean regions of the country, were killed by both sides. The bodies left from these killings were buried in mass graves high in the mountains. However, when the government changed in 2003, the Final Report from the Truth Commission was published. It was an official document revealing the atrocities committed for 20 years. For this reason, the Forensic Team of Specialists was created and, in November 2013, the team carried out an ambitious expedition into the Chungui district (in the region of Ayacucho), an area amid the Peruvian Andes which the authorities deemed to be the scenario of “the most destructive violence in all the country”. In 1981 the Chungui district had 8,957 inhabitants and in 1993 there were only 4,338 left, according to the official census.

The Forensic Team of Specialists intended to exhume the bodies, identify them and deliver them to their relatives, which in many cases had survived or witnessed murders and later helped the authorities in the process of locating and recovering the bodies. In this case, 19 graves were exhumed and inside them, 56 victims were found: 26 minors, 18 women, 6 men and 6 adults whose gender could not be determined.

In October 2014, after an identification process, the bodies were delivered to their relatives in Ayacucho. The mortal remains were taken to their faraway communities to be given a proper burial.

He was born in Lima (Peru) in 1978, where he currently resides. In 2005 he completed his degree in journalism in the Universidad Pontificia Católica of Peru, where he went on to continue his studies in the School of Arts. After working for several printed media, in 2010 he joined the roster of photojournalists working for the newspaper La República, where he has been working since 2015 as graphic editor.

In 2012 he was awarded the first prize in the Latin American competition “Fototierra”. That same year he was given a scholarship by the Fundación Nuevo Periodismo Iberoamericano to study in the Taller de Edición Fotográfica Violencia y Sociedad (El Salvador). In 2013 he came third at the POY Latam awards, under the category “Celebrations, Traditions & Religion”.

In 2015 he came first in the POY Latam photojournalism competition, under the category “News”. That same year he received four awards at the Humanity Photo Awards (China): two Performance Awards, a Nomination Award and one of the Jury’s Special Awards. In October 2015, he received the award “Honor a la Excelencia Periodística en Fotografía” given out by the Inter American Press Society.

His photos have been published in different media in Peru and also in other international media such as El País, The Guardian and La Tercera. The latest exhibition of his work was in the Cervantes Institute of Beijing (China), Sept-Oct, 2015. 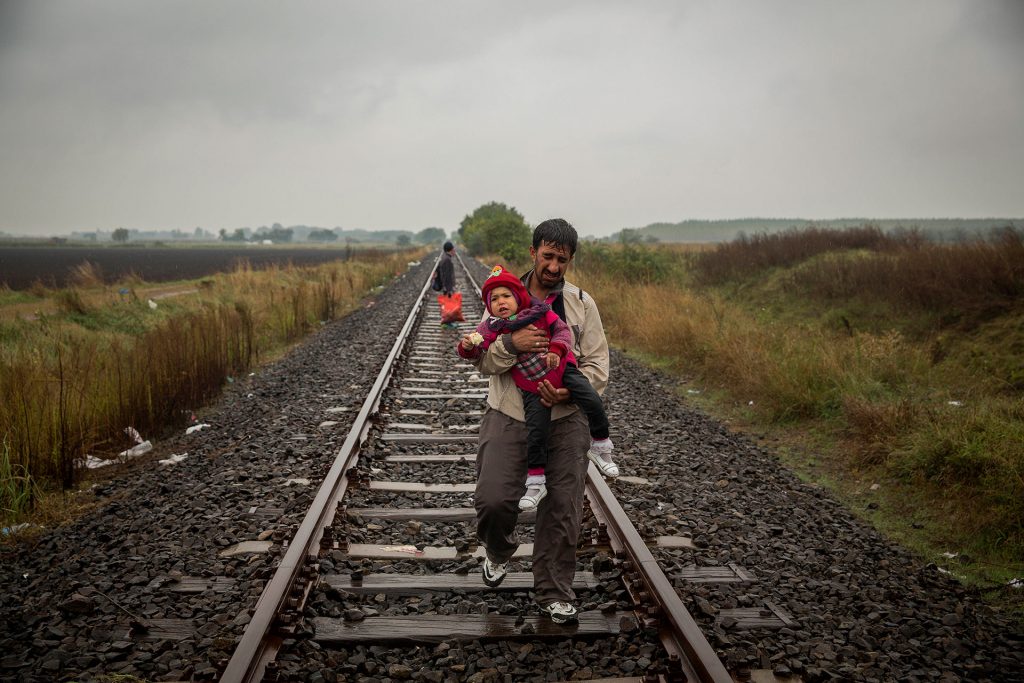 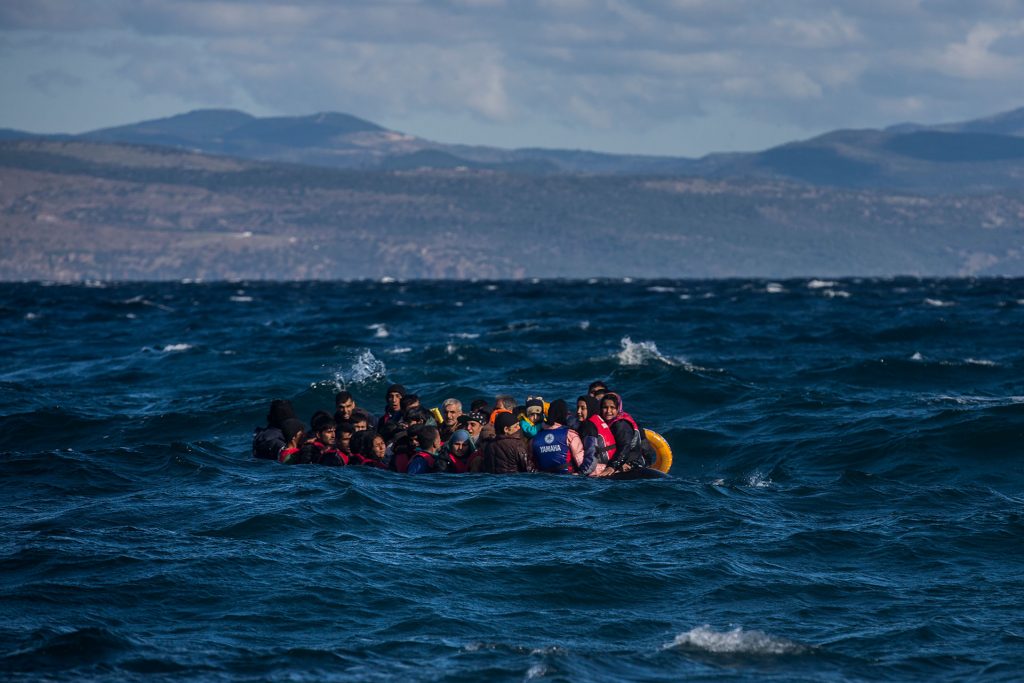 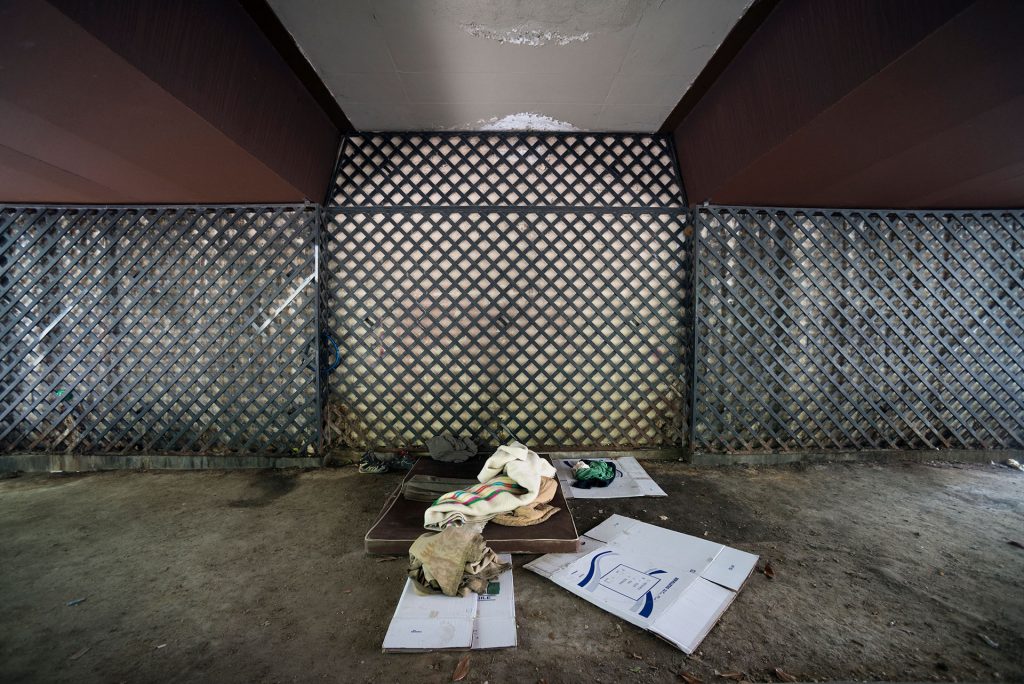