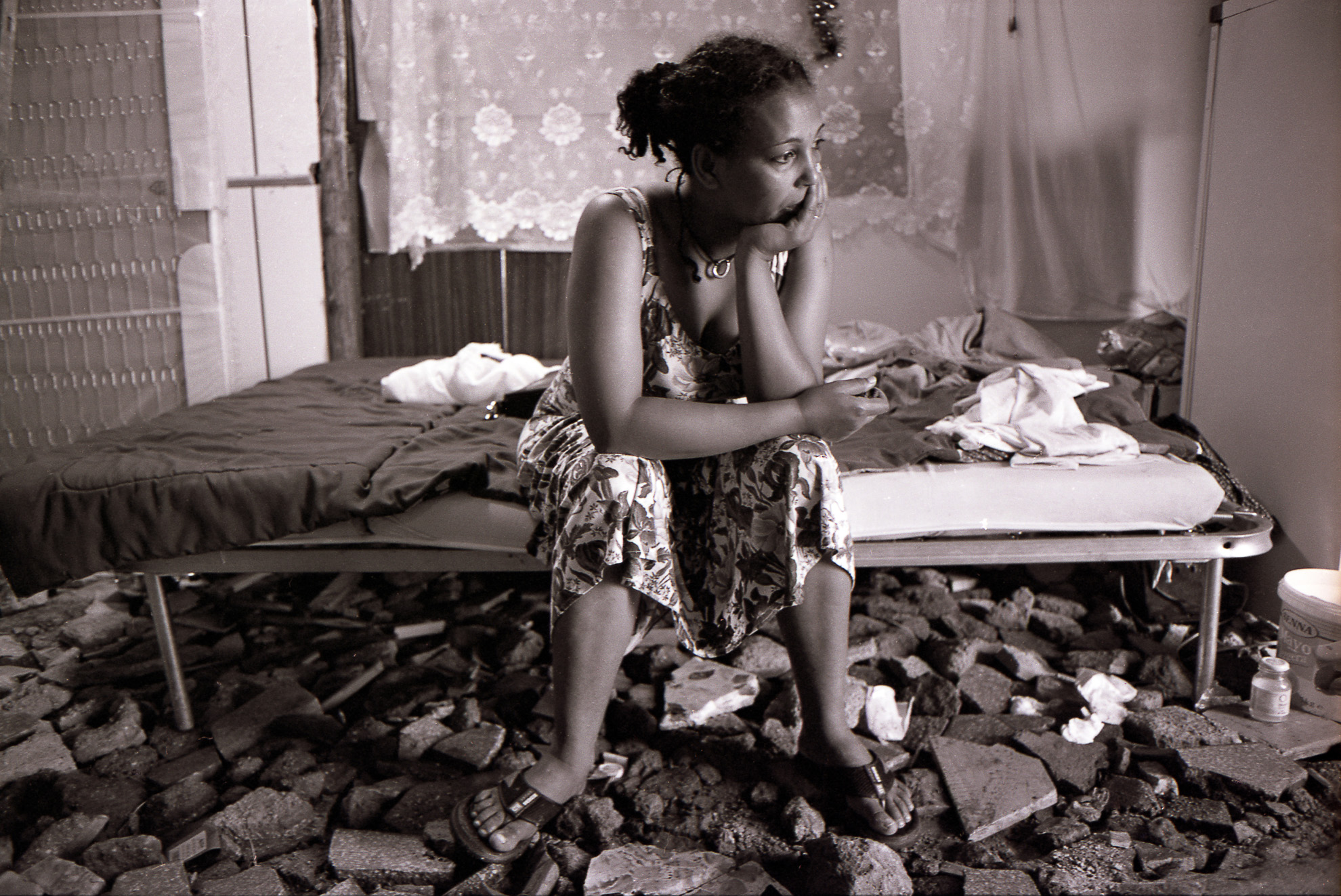 1. A fire on the night of June 21, 2006, destroyed 80% of the homes. Fortunately there were no victims. Civil Protection put out the fire, and hand out some shirts and boxes of food. Most of the immigrants lost what little they had, and got no answer on how to resolve their precarious situation. This portrait is of one of the neighbourhood residents, 25 year-old Sara, inconsolable, in one of the few shacks still standing.

Sheltered in the ash

This photograph was taken in the Ponte Mammolo neighborhood in Rome (Italy), a shanty town built by a community of immigrants, most of them from Eritrea, who were granted refuge when they fled the conflict that erupted in 1998 between Eritrea and Ethiopia.

When I was barely four years old I was already walking around the house with a notebook and pen tucked into the pocket of my flannel dressing gown. I went from room to room taking notes on what I observed, what I found out. Of course, I couldn't write yet, but I would make up scribbles in the form of words. At the same time, in the late '70s, my aunts would take photos of my sister and me, which my mother would organize into albums. I was fascinated by those black and white images. I spent a lot of time being amazed that a photograph looked so much like the real world and yet so little like the real world.

I liked to understand people through the photos and their stories. I even interviewed my grandparents, writing down their answers when necessary. Later I studied Geography and then Reportage Photography to have more tools with which to interpret the realities of people outside my little world.

A picture is not worth a thousand words. The function of the image is to suggest words. The function of the word is to suggest images. Combining photography and words (narrative storytelling) has allowed me to find a complete means of expression. This is something I have been able to put into practice thanks to the Barcelona photojournalistic collective SomAtents, of which I have been a member since 2015. Without a doubt, working regularly with this collective, as well as developing my professional life as a photography teacher at the school of Art and Design EMAD, and teaching photography seminars at the Universitat Autònoma de Barcelona has given me a great learning experience.

I have done photo-reportage work on the following subjects: Zapatista movement in Chiapas (Mexico); child sexual exploitation in San Salvador (El Salvador); childhood and HIV in San Pedro Sula (Honduras); malnutrition in Jocotán (Guatemala), Eritrean and Ethiopian refugees in Rome (Italy); apartheid and colonization in the West Bank (Palestine); poverty and acculturation in the Navajo Indian reservation (USA), feminicide in Ciudad Juárez (Mexico), refugees and COVID in Lampedusa (Italy). In Barcelona, I have reported on the environment; substandard housing, drug dealing, and homelessness; sexual abuse and patriarchy; illiteracy. I have published my work in newspapers such as Directa. cat, Público.es, El Periódico.com, La Jornada, 20 minutes and above all in the magazine of the SomAtents collective. The work I did on SPECISM is the one that seems most important and necessary to me because it focuses on reviewing what is happening to the true innocents and the greatest victims of all history.